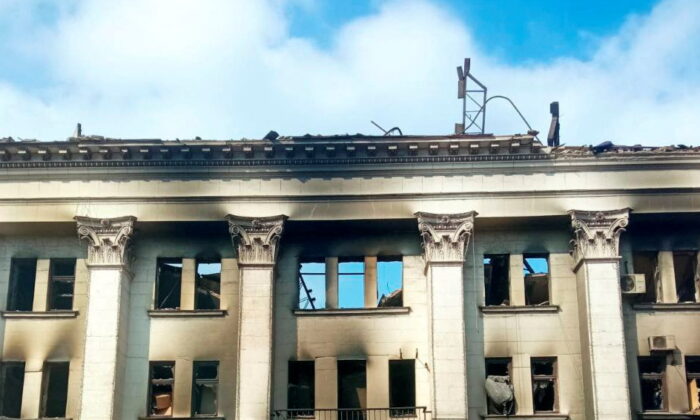 General view of the remains of the drama theatre which was hit by a bomb when hundreds of people were sheltering inside, amid ongoing Russia's invasion, in Mariupol, Ukraine, on March 18, 2022. (Azov/Handout via Reuters)
Viewpoints

The Curious History of Nunn-Lugar and the Former Soviet Republics

As with all legislation, a good and noble idea, but that was 30 years ago

Grand treaties were devised during the Cold War between the East and West. These treaties were negotiated with the best of intent (at least on the West’s side) to mitigate the likelihood of any nuclear, chemical, biological, or other, forms of conflict. There were several treaties, including, but not limited to, the Space Treaty, the Strategic Arms Limitation Treaty, the Antarctic Treaty, and the Biological Weapons Convention to name a few. The common citizen now understands that many countries, such as China, may sign these, yet through examples like the Wuhan Lab, reserve a right to aggressively circumvent the treaties.

Loosely paraphrasing Winston Churchill, yes, Jaw, Jaw is better than War, War. But these treaties are only meaningful if aggressively monitored and there are means to compel enforcement, otherwise they are just opportunities for internationalists to sign worthless paper. One noteworthy treaty we are now rediscovering is the Nuclear Non-Proliferation Treaty, which opened for signature in 1968 and aimed to limit the spread of nuclear weapons.

To help enforce this treaty and provide for stability and securing of nuclear, chemical, and biological weapons as the Soviet Union collapsed, then-President George H.W. Bush signed the Nunn-Lugar legislation, more formally known as the Soviet Nuclear Threat Reduction Act of 1991 and often referred to as Cooperative Threat Reduction (CTR). As with all legislation, good and noble intent was the foundation. This law created a vast U.S. Government program to secure these unsecured weapons of mass destruction in the former Soviet Republics (including Russia) and to employ the experts, technicians, and scientists associated with these weapons.

In an interview, Ambassador (Retired), Pete Hoekstra shared the following about the CTR: “The rationale for the CTR programs ended more than a decade ago, but what’s been happening in these facilities? Bureaucrats indicate that the U.S. government didn’t own or operate any of these facilities. That’s not the point. It seems Americans were employed at some of these labs, and that the U.S. partially funded them. Listen to bureaucrats when they talk; for the common person, “owned and operated” doesn’t sound much different than “funded and employed,” a distinction without a difference—except for a bureaucrat. It might mean they could say they never lied to Congress or the American people.”

Ambassador Hoekstra added further: “Too often, programs gain a life of their own, morphing into something that doesn’t even closely resemble the original intent of the program. Bureaucracies create their own agenda to perpetuate and justify their existence.”

Russia walked away from this program, which reaped them millions in U.S. Foreign Aid, in 2015. Ukraine and others have continued with a greatly expanded CTR, but as Ambassador Hoekstra pointed out, what was really going on with CTR?

Has the Cooperative Threat Reduction Program Gone Off the Rails?

While Russia was on its knees in the 1990s societally, governance wise, and economically, the CTR initiative appeared to make sense, at least at first glance. During the earlier days of the program, the annual budget was in the $400 million range, solely at the Department of Defense (DoD), but has grown to over $1 billion at the Department of Energy and the Department of State in addition to the DoD effort (which shrank to $200 million in the DoD FY 2022 Budget Request). Although “Cooperative Threat Reduction” is a nice sounding name, the Cato Institute quickly sensed waste and danger, and in 1996 put out a prescient report, largely unfavorable to the CTR program. “Without a plan and a budget, the CTR program has become little more than a list of more than 35 ‘bright ideas’ for spending U.S. funds in the former Soviet Union—none of which directly addresses the core U.S. objective of destroying nuclear warheads.” Translation: A lot of money was thrown fast at a good sounding idea. I have lived through New START initiatives, and this was a major red flag. Throw money at something, then we will come up with a plan, is a wonderful strategy for bureaucrats, not a good idea for the U.S. taxpayer.

There’s also this curious thing set up under the State Department called the Biosecurity Engagement Program (BEP), which begat labs in Kyiv and Odessa under the Biological Threat Reduction Program as listed on the U.S. Embassy in Ukraine website. Ambassador Hoekstra observed: “The very fact that Ambassador Victoria Nuland [testifying at a Senate Foreign Relations Committee hearing] was unable to provide a simple ‘yes’ or ‘no’ answer about whether there were dangerous materials in these facilities is another reason to take a hard look at exactly what was going on in these facilities.

“Everything we’ve heard to date just raises red flags. What I’ve learned from 18 years of oversight, is—when you see smoke, there’s probably a firestorm someone is trying to hide.”

The Russian invasion of Ukraine has brought the world to the most precarious situation since the Cuban Missile Crisis of 1962. Other than the Trump presidency, all administrations have passionately—and perhaps recklessly—embraced treaties that, although well intended, have either snookered America into positions of vulnerability or perhaps the executive branch implementation has become something other than advertised and in need of intense congressional review. To secure America from the rapidly deteriorating world situation, action is needed now, part of which is finding truth on what Nunn-Lugar has become.