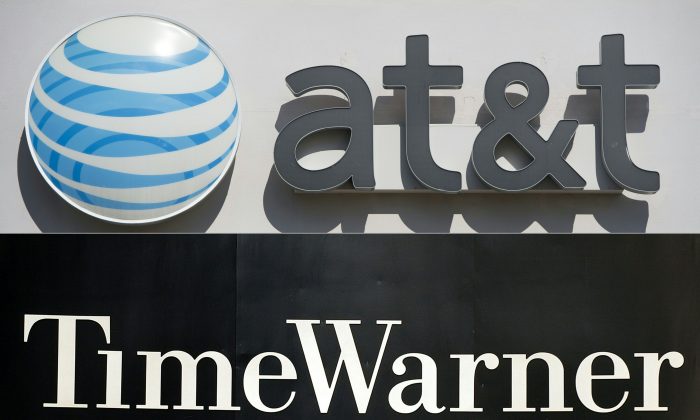 A montage of the logos of AT&T and Time Warner. After a protracted trial, the $85 billion merger is allowed to proceed, thanks to a healthy dose of economic reality. (Saul Loeb; Stan Honda/AFP/Getty Images)
Viewpoints

The Curious Case of the AT&T-Time Warner Merger

In a landmark ruling for U.S. antitrust law, a federal judge in June approved the merger of Time Warner Inc. and AT&T, which was contested by the Department of Justice (DOJ). It was the first time the courts had opined on a vertical merger between two firms at different points on the supply chain in 41 years. In 2018, economic models tried to block the merger; economic reality got it approved.

Judge Richard Leon found that the DOJ failed to prove its theory that the merger would lead to increased bargaining power for the new company and higher prices for consumers.

Beyond the important precedent for future antitrust cases, the decision calls into question whether mathematical models that have come to dominate the economics profession are useful in the courtroom.

Before the trial started in March 2018, I analyzed the starting situation.  Having some past work experience at the intersection of economics and law, it was easy to foresee the slugfest between the expert economists hired by the DOJ and AT&T-Time Warner. I wrote:

“The DOJ will trot out a series of models and calculations … to prove that Time Warner would raise its prices to AT&T’s rivals should the merger take place, and that those price increases would be passed along to consumers. AT&T will then put forward an expert witness, likely a prominent academic economist … who will call into question each and every one of the assumptions and inputs used by the DOJ.”

Leon’s characterization of the ensuing economic throw-down is eerily similar:

“In addition to offering the so-called ‘real-world objective evidence’ set out above, the government called noted antitrust economist, Professor Carl Shapiro, to testify in support of its increased-leverage theory. Professor Shapiro first discussed the academic underpinnings of the theory, explaining that it was grounded in an economic concept known as the Nash bargaining theory.

“At trial, defendants mounted a series of attacks on Professor Shapiro’s analysis. They challenged Professor Shapiro’s threshold contention that the economic theory of Nash bargaining can accurately predict the dynamics and final fee structure of complex affiliate fee negotiations. They also asserted that the theory, as applied here, rests on improper assumptions.”

Two things happen in a vertical merger. First, because of efficiencies, the newly merged company has lower costs, passing some of these savings on to consumers as lower prices. Second, the upstream firm (Time Warner, in this case) now has more leverage in selling its product to competitors of the newly merged downstream firm.

Time Warner owns the Turner family of shows and channels (such as CNN and TNT), while AT&T owns satellite TV provider DirecTV. Before the merger, if Time Warner had demanded too high a price for the Turner content, a cable or satellite provider could have nixed the deal and left Time Warner in the cold. After the merger, if a cable or satellite provider other than DirecTV opted to black out Turner channels and not pay the higher price, DirecTV would gain some portion of the subscribers lost to the other provider because of the blackout, benefiting Time Warner.

The theory is that this would lead to higher prices for DirecTV’s competitors, passed on in part to consumers in the form of bigger cable bills. In court, AT&T-Time Warner wants to show that the efficiency effect swamps the leverage effect, benefiting consumers. The DOJ wants to show the opposite. Let the games begin.

This is all standard operating procedure in antitrust and other commercial litigation, and my earlier article boiled down to the following critique:

“When relationships between variables cannot be directly observed, economists too often rely on simplified models and untested assumptions to ‘do their best’ to provide an answer. But a more modest and less arbitrary antitrust policy might start with regulators being clear about what they do and do not know. We do not know how many customers would switch from a major cable operator to another provider after the loss of a popular set of channels, because it has never happened.”

Apparently, Leon also hasn’t been thrilled with the status quo of antitrust litigation. He wrote that “antitrust theory and speculation cannot trump facts,” asserting that the DOJ’s expert testimony “‘rests on assumptions’ that are ‘implausible and inconsistent with record evidence” and adding that “that is true no matter whether the testimony related to a theory that is considered ‘mainstream’ or has been deemed applicable to different factual or economic scenarios in other proceedings.”

It is refreshing to note that the court system places more emphasis on real-world data than do economists.

The problem here isn’t mathematical models per se but how we as economists use them in court. When John Nash first published his bargaining model in 1950, his goals were quite modest: “In order to give a theoretical treatment of bargaining situations, we abstract from the situation to form a mathematical model in terms of which to develop the theory.”

Models, whether mathematical, graphical, or intuitive, can enrich, focus, and formalize our understanding of general classes of economic phenomena. Even when we talk in plain English about how free markets work, those shifting supply and demand curves, however idealized and abstract, are in the back of our minds. Models place order and taxonomy on the world, meaning we don’t have to start from scratch each time we think about a new problem.

Models are far more problematic when we apply them to specific, complex, real-world situations and demand answers with a high degree of precision. And that describes the world of commercial regulation and litigation to a tee. When you combine the evidentiary standards of the courtroom with the theoretical abstractions of the classroom, things get weird.

Stuck in the Weeds

In court, the burden of proof was on the DOJ to show that this theorized price increase eclipsed the merger’s cost savings. It was, therefore, important to know the magnitude of this price increase with some precision.

This scenario, in turn, depends on how many subscribers the other provider would lose, how many of those subscribers would switch to DirecTV, and how much profit AT&T-Time Warner would make on its new DirecTV subscribers. The magnitude of these factors—put differently, the value of the inputs to a model—therefore became a question of much importance.

Empirical fact does not get us very far in determining these switching rates and profit margins. As Leon wrote, echoing my own pretrial analysis, “The evidence showed that there has never been, nor is there ever likely to be, an actual blackout of Turner content.” And with that, we enter the realm of speculation.

It would be one thing to present a model in which a wide range of input values all lead to the same conclusion that consumers would be harmed by the merger. Unfortunately for the DOJ, it turned out that small changes in the values of each input could make or break their case.

Pages 109 to 150 of the judge’s decision detail the protracted battle over the correct value of these three inputs. It is an exercise in mind-numbing minutiae. Here are just a few of the finer points argued by some of our nation’s top attorneys, academics, and regulators:

This is what happens when you use a model that was intended to inform general reasoning about economic incentives to instead try to pin down a precise number stemming from thousands of decisions and data points in the real-world merger of two huge corporations. You get a result that hinges on an updated number in an obscure PowerPoint deck, or whether or not a few people would join Netflix instead of a new cable company.

And then there’s the choice of the model itself. Critics of game theory, the type of modeling used in this case, often cite the field’s “embarrassment of riches,” meaning there are so many models available that one can be found to explain almost anything. What seem like subtle differences in assumptions can often be hugely consequential.

The intuition behind the DOJ’s model is that because DirecTV would gain some new customers, a Turner blackout with a competing provider would be a little less bad for the combined AT&T-Time Warner than for Time Warner alone, meaning the combined company would, in turn, be emboldened to demand a higher price for its channels from that provider.

But “a little less bad” is still bad. I argued in my pretrial article that it would be almost impossible for the extra subscribers gained by AT&T-Time Warner to eclipse the revenue hit they would take by blacking out Turner channels to another provider. A little less worse off than Time Warner on its own? Sure. But how credible is a threat if the party making it would also be badly harmed? Leon had the same skepticism:

Numerous witnesses explained, and Shapiro acknowledged, that a long-term blackout of Turner content, even post-merger, would cause Turner to lose more in affiliate fee and advertising revenues than the merged entity would gain. Given that, there is an insufficient evidentiary basis to support Shapiro’s contention that a post-merger Turner would, or even could, drive up prices by threatening distributors with long-term blackouts.

There are whole models and solution concepts in game theory that deal with noncredible threats (though they no doubt have their own problems when applied to a specific case). Seemingly subtle changes in mathematical or logical assumptions can radically change game-theoretic models’ solutions.

I mean none of this to specifically impugn Shapiro or the DOJ. This is standard operating procedure in the field. The defense played the same game; they just had a lower burden of proof.

The problem is a mismatch of sorts. Economic models such as Nash’s bargaining model were originally meant to inform abstract and general thinking. But courts need hard-and-fast answers in specific real-world settings.

It has become too commonplace in the economics profession to put these models forward as though they can provide those specific answers. The crux of the matter is the attitude among many economists that rigorous mathematical proof and statistical tests are the only way to do economics. Sure, other questions and methods are important, they concede, but that’s why we have other disciplines.

The problem is that when economics is restricted to the mathematically rigorous, that’s all economists have to offer. The complexity in a merger between two large media companies cannot be modeled with such rigor. The questions at the heart of the AT&T-Time Warner merger are economic ones, and economists must be at the table. It behooves us as a profession to take a hard look at what we bring.