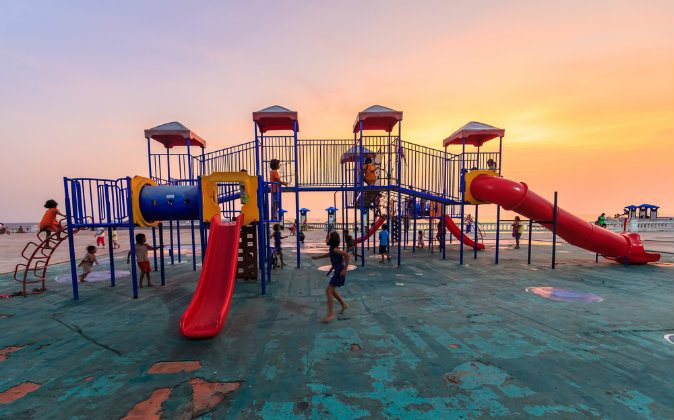 The Cult of Kiddie Danger

The Richland, WA, school district is phasing out swings on its playgrounds. As the district’s spokesman recently told KEPR TV: “It’s just really a safety issue. Swings have been determined to be the most unsafe of all the playground equipment on a playground.”

Ah yes, those dangling doom machines. All they sow is death and despair.

But while this sounds like yet another example of how liability concerns are killing childhood (seen a see-saw anywhere in the last 20 years? A slide higher than your neck?), it’s deeper than that. Insurance underwriters are merely the high priests of what has become our new American religion: the Cult of Kiddie Danger. It is founded on the unshakable belief that our kids are in constant danger from everyone and everything.

The devout pray like this: “Oh Lord, show me the way my child is in deathly danger from __________, that I may cast it out.” And then they fill in the blank with anything we might have hitherto considered allowing our children to eat, watch, visit, touch, or do, e.g., “Sleep over at a friend’s,” “Microwave the macaroni in a plastic dish,” or even, “Play outside, unsupervised.”

The Cult’s dogma is taught diligently unto our children who are not allowed to use Chapstick unless it is administered by the school nurse, nor sunscreen, lest they quaff it and die of poisoning, nor, for the same reason, soft soap in pre-k. It doesn’t matter that these fears are wildly at odds with reality. They are religious beliefs, not rational ones.

What’s more, this is a state religion, so the teachings are enforced by the cops and courts. Those who step outside the orthodoxy face punishment swift and merciless.

You can’t step out side at all, in fact. Americans are not allowed to believe any public place is safe for their children, ever, without constant supervision. Trust is taboo.

The logical under-current is illogical, as it’s based on a hapless understanding of basic statistics. How many children are kidnapped by strangers in a year? About one in 1.5 million – those are incredibly great odds. But odds don’t matter when we’re evangelizing about a vision of death and destruction.

More: Overprotecting your kids could cause them to become overweight.

That’s why, last winter, when a New Jersey mom left her sleeping 18-month-old in the car for 5-10 minutes while she ran an errand at an upscale shopping mall, she returned to find herself under arrest. Though the child was completely fine — he seems to have slept through the whole “incident” — the mom was found guilty of abuse or negligence. An appeals court of three judges upheld this conviction with the comment, “We need not describe at any length the parade of horribles that could have attended [the child’s] neglect.”

In other words: The judges need not spell out their Boschian fantasies. If an authority can envision something “horrible” happening – and even turn that adjective into a noun — it doesn’t matter how farfetched any actual scenario is. (In fact, the danger of dragging your child across the parking lot is larger than letting him wait in the car a few minutes.) Anyone doubting constant danger is a heretic. The mom is now excommunicated — that is, she’s on the New Jersey Child Abuse Registry. Good luck to her if she hoped to work with kids, at least while the case makes its way to the New Jersey Supreme Court.

And if you can stand to hear another one of these, a similar case concerns a Chicagoland mom who let her young son wait in the car for less than five minutes this September while she, too, ran an errand. An onlooker alerted the authorities, which brought not only the police but also the paramedics, who proceeded to examine the child as if he had been in grave danger. Sure, it’s the same grave danger any of us face when sitting in traffic — four minutes in an unmoving car. But magically, because the mom was not directly supervising the child, it transmogrified into a near-death experience.

Zero Tolerance laws are another code of the Cult, stemming from the same belief that while the danger to a child might seem minimal to the point of non-existent, to true believers it looms large and immediate. And so children have been suspended around the country for a plastic gun the size of a toothpick, a Lego gun the size of a quarter, and the infamous “gun” made out of a Pop Tart. And by “made” I mean “bitten into the shape of, by a 7 year old.”

How can we explain any of this hysteria if not by religious fervor? To see danger where there is none is no longer considered crazy, it’s a mission. Many authorities seem to believe the more danger they can imagine, the holier they are. In a letter home to parents, the principal at the Pop-Tart school wrote, “While no physical threats were made and no one [was] harmed, the student had to be removed from the classroom.”

Had to? Because…he had a Pop Tart? Or because the boy with the pastry pistol was magically dangerous, like a witch with her cat?

In a society that believes children are in constant danger, the Good Samaritans are often terrible people. So, recently, when a woman in Austin noticed a 6-year-old playing outside, she asked him where he lived, walked him home (it was just down the hill), and chastised the mom — Kari Anne Roy — for not being careful enough.

Then this Samaritan called the Inquisitors. Er…cops.

An officer showed up at Roy’s doorstep and despite the fact that the crime rate today is at a 50-year-low, a CPS investigator was also dispatched to interview all three of Roy’s children. She asked Roy’s 8-year-old if her parents had ever shown her movies with people’s private parts. “So my daughter, who didn’t know that things like that exist, does now,” says Roy. “Thank you, CPS.”

It was almost seven years ago that I let my 9-year-old ride the subway alone and wrote a newspaper column about it. The result? A media firestorm. Back then I thought my crime, in the eyes of the public, was putting my child in danger.

But gradually I’ve come to realize my real crime was that I publicly disavowed the state religion. After a talk show host tried to get me to recant, asking: “How would you have felt if he didn’t come home?”

I could have sobbed and fainted, claiming it had been only a momentary lapse when I’d trusted my son in the world. Instead I said, “I wasn’t thinking that way. If I did, I could never let him do anything.”

Today it is a sin—and sometimes a crime—NOT to imagine your children dead the moment you take your eyes off them. The moment they skip to school with a Chapstick, wait in the car a minute, or play at the park.

We think we are enlightened in this quest to keep kids completely safe. Actually, we have entered a new Dark Ages, fearing evil all around us.

If we want the right to raise our kids rationally, even optimistically, it’s time to call the Cult of Kiddie Danger what it is: mass hysteria aided and abetted by the

authorities. But as earlier holy books so succinctly instructed us, there is a better way to live.

Lenore Skenazy is a public speaker and founder of the book and blog Free-Range kids. Her show “World’s Worst Mom” airs on Discovery/TLC international.

*Image of a playground via Shutterstock