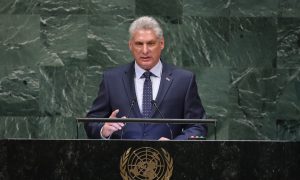 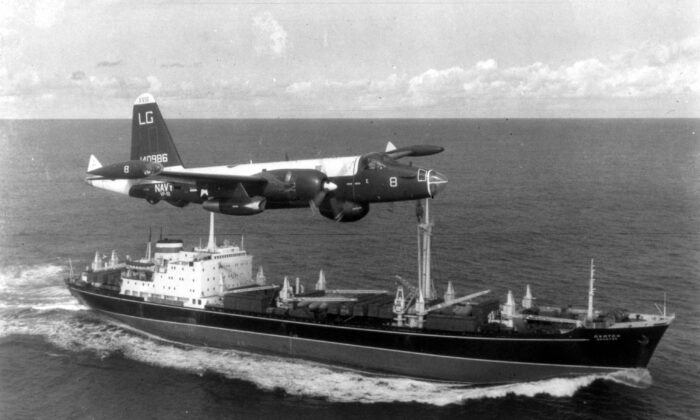 A P2V Neptune U.S. patrol plane flies over a Soviet freighter during the Cuban Missile Crisis in October 1962. The crisis brought the world to the verge of nuclear catastrophe. (MPI/Getty Images)
Viewpoints

58 years ago this month, the world came close to nuclear war

The Cuban Missile Crisis of October 1962 was more than a collision of the superpowers at the height of the Cold War. It was also a personal confrontation between men of different generations and outlooks.

Nikita Sergeyevich Khrushchev, the undisputed strongman of the Soviet Union, was 68 when he went nose to nose with 45-year-old John Fitzgerald Kennedy of the United States over Soviet missile sites in Cuba capable of hitting the northern U.S. and Canada.

Word first reached Kennedy on Sept. 21, via spies, that 20 medium-range ballistic missiles had arrived on the island, according to Robert Dallek in “Camelot’s Court: Inside the Kennedy White House.” Things moved quickly after that, and by Oct. 16 he learned from aerial photographs that the spies were right. For the next week, he and his military advisors discussed options, with Kennedy dismissing plans to invade Cuba, which sits close to Florida, or bomb the sites. On Oct. 22 he addressed the nation on TV, set up a naval blockade to stop the sites’ further development, and six days later the crisis was over.

Why did the Soviets make such a reckless attempt to establish missiles in Cuba? Such actions don’t happen in isolation. In April of 1961, Kennedy had reluctantly approved the Bay of Pigs operation, an invasion of Cuba planned by the CIA under President Dwight Eisenhower. The failed attempt by Cuban exiles to overthrow the communist regime of Fidel Castro reduced the president’s stature. Khrushchev sat smugly in the wings, watching Kennedy fumble his way along, or so it seemed.

Seizing on what he perceived as Kennedy’s weakness, the Soviet leader began in August of that year to build the Berlin Wall to stem the tide of East Germans fleeing to the West. Tanks of the two sides met in Berlin that summer, and war was averted when the Soviets withdrew. The Berlin Wall stood for three decades.

In Canada, too, an elder statesman made the mistake of underestimating Kennedy. Prime Minister John Diefenbaker, like his communist rival in the USSR, was born in the 19th century, while Kennedy first saw the light of day in 1917. The two, to be kind, didn’t see eye to eye. If anything, Kennedy got along better with Khrushchev than he did with Diefenbaker, then 67, his ally and neighbour. Kennedy even sent his personal pollster to Canada to help defeat Diefenbaker in the next election.

Though allies in the Second World War, tensions grew between America and the USSR. The Soviets, who had lost millions of soldiers and civilians to German armies, occupied Poland, Hungary, and other eastern European states to form a buffer zone. What Winston Churchill later called an “Iron Curtain” thus separated capitalism from communism, democracy from totalitarian tyranny.

After the United States obliterated Hiroshima and Nagasaki with nuclear bombs to end the war with Japan in the summer of 1945, the Soviets stepped up their own efforts to acquire nuclear weapons and tested one in August 1949, ushering in the era of MAD—mutually assured destruction. Through the 1950s, the Soviets remained nervous about NATO warheads aimed their way from Europe and Turkey, prompting ideas of putting missiles in Cuba when Castro came to power in 1959.

A decorated war vet with an eye for the ladies, Kennedy, at 43, was elected president in November 1960. Though married with children, he was friendly with movie star Marilyn Monroe. At work it was all business, and the Bay of Pigs debacle taught him not to fully trust his military advisors, which probably saved the world from war. Instead of invasion or bombing of Cuba he chose the successful naval quarantine or blockade, and pushed back the line to give Soviet ships more time to turn around.

In the end, the United States agreed not to invade Cuba in exchange for removal of the missile sites. It was also agreed that NATO’s Jupiter missiles in Turkey and Italy, according to Robert Dallek, would be removed. The USSR was worried the warheads might give NATO a successful first-strike capability (an attack negating an appreciable response).

The following year, in 1963, a hot line—not a telephone line but a secure teletype link, later upgraded to email by satellite link, according to Rodric Braithwaite in “Armageddon and Paranoia: The Nuclear Confrontation”—was installed to enable the U.S. and Soviet leaders to communicate quickly.

Also, the Partial Test-Ban Treaty was signed in Moscow, reducing radioactive fallout by prohibiting nuclear weapons tests in space, the atmosphere, and under water. Underground tests were still permitted.

In Canada, Diefenbaker’s reluctance to support the blockade and move Canada to a higher level of military alert at Kennedy’s request led to divisions in his cabinet. Defence Minister Doug Harkness, in the midst of the crisis, pointed to Canada’s obligations under NATO and NORAD (North American Air Defence Command) and raised the alert level. Five months later, after winning the biggest majority in Canadian history in 1958, Diefenbaker lost the federal election on April 8, 1963, to Lester Pearson’s Liberals. Kennedy was assassinated on Nov. 22, 1963, by a Soviet sympathizer and Khrushchev was replaced the following year by Leonid Brezhnev.

The takeaway here? Don’t judge a man by his age or faults alone. High political office attracts exceptional people—often with flaws as visible as their virtues—and a wise populace puts up with the flaws to gain from those virtues. The American people were glad to have done so in the fall of 1962. The rest of us are still grateful.