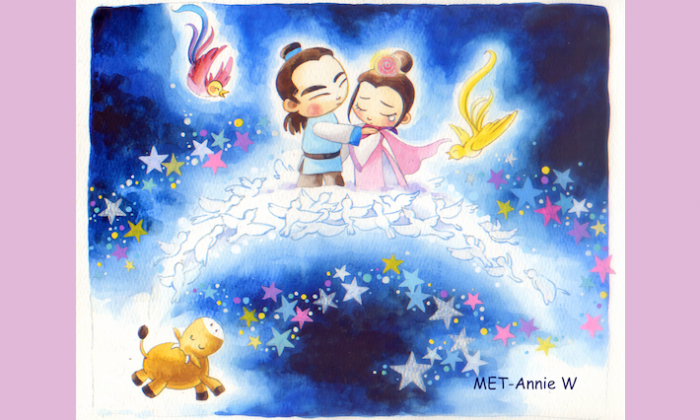 On the night of the 7th day in the 7th month, Niulang and Zhinu can travel across the Milky Way over a bridge formed by magpies for their once-a-year reunion. (Annie Wu/Epoch Times)
China

The Cowherd and the Weaver Girl

A very long time ago, the sky was not as high as it is now and divine beings were not so far away from human beings on Earth. What happened to cause this great divide? The following is one telling of the sorrowful tale of two truly star-crossed lovers.

Situated in a small village near a hill, there was a household with two brothers. Their parents died when they were still young, so the younger brother had to live with his elder brother and sister-in-law.

Because his brother’s wife disliked the young man, she forced her husband to divide up the property and force the younger brother out of the household.

The younger brother thus left the family with only an ox that was very old, so old that no one remembered when it came to the household.

Without a home and having nowhere to go, the younger brother roamed aimlessly with the old ox until he found a cave in a high mountain outside the village. He cleaned up the cave and settled down there.

In the mountain wilderness, day by day, the younger brother diligently cultivated the wild land with a pick-ax along with the old ox, from early morning until nightfall. With painstaking effort, they were finally rewarded with a rich harvest of grain and vegetables.

When the fall came, the younger brother was able to feed himself. He then started to construct a thatched cottage for shelter. Since the younger brother didn’t have a name and because he was always with his ox, he was eventually called Niulang, which means cowherd.

Though he worked industriously every day, from time to time, Cowherd would lean on his ox at rest to look up at the sky and gaze at the clouds and the stars. As the ox was his only company, Cowherd often talked to it as family and called it Ox Brother.

He talked to the ox, saying idly, “Ah, Ox, my only companion, the clouds in the sky are a different color every day. They are white, red, or gray. Who on earth makes them so colorful and beautiful?”

“Ox Brother, are there really fairies in Heaven? Legend has it that the colorful clouds are woven by fairies. Are those fairies very beautiful? Are they particularly compassionate…?”

Day after day, Cowherd asked these questions and answered himself at his leisure.

One day, to his surprise, the cow answered him, saying “Yes, those colorful clouds are woven by a fairy named Zhinu (Weaver Girl), who is the youngest daughter of the Heavenly Queen.”

Cowherd was so shocked that he jumped right up from the ground to look around, and asked, “Is there anyone there? Who was talking just now?”

After looking around awhile, he discovered nobody was there but him and the ox.

“Is it possible that it was my old ox talking to me?” he wondered aloud. “Ah! How on earth could you talk?”

In answer, the old ox told him that fairies would fly from Heaven to the Western Hills around noontime the following day; that they would bathe in the spring there.

It also told him to hide behind a tree and stealthily take the youngest fairy’s feather cloak. By doing so, it said, the fairy would not be able to fly back to Heaven, and he could ask her to marry him.

The following day, Cowherd made his way with the ox all the way from his cottage to the Western Hills. Upon arriving at top of the hill, he found there really was a lake with crystal clear water surrounded by lush mountains and beautiful scenery.

Cowherd wondered aloud, “Ox Brother, we’ve been to the Western Hills, but why didn’t we see this spring and this lake before?”

When it was close to noontime, they saw big beautiful birds flying toward them from the horizon. As soon as the birds reached the spring, the colorful plumage on their bodies fell off all of a sudden, and they turned into beautiful fairies.

Cowherd held his breadth, and identified the disguise of the youngest fairy that the ox had mentioned and crept up to the site. He snatched up the cloak and quickly ran away with it.

Frightened by his presence, all of the fairies hurriedly came out of the spring. They put on their feathery frocks to fly back to Heaven, all except the youngest one. Failing to find her plumage, she had no choice but to stay earthbound.

Cowherd came out of hiding and made a deep bow to Weaver Girl, saying, “Dear Fairy! I am Cowherd. Will you marry me and become my wife? I am poor, but I am hard-working and capable. Please stay with me, won’t you?”

The timid Weaver Girl nodded her head. Cowherd helped Weaver Girl up onto the ox’s back to ride home with him.

From that day forward, he worked on the farm and she wove wonderful cloth at home. Always together and never apart, they lived their lives with great devotion and Cowherd was no longer lonely.

All the villagers loved her. She was the same as a human being except that she didn’t eat, for an old saying goes that deities do not eat human food. She never seemed to get hungry, and yet she was always so full of energy, always so beautiful.

Over the years, Weaver Girl gave birth to a pair of twins: a girl and a boy. Yet, happy days are always short lived. One day, the old ox said to Cowherd: “Dear, Cowherd, I’ve become quite old and it is my time to leave. When I die, don’t throw away my hide. Keep it and when you are in danger, wear it. It will help you.”

After it finished speaking, the old ox passed away. Cowherd was very grieved. Ox Brother had helped him tremendously before. Still, he did as the old ox requested and kept its hide.

Their idyllic life went on for nearly another year. Then one day, Weaver Girl suddenly said to Cowherd, “My husband, I have to leave today. I must return to the Heavenly Palace. You and I were once joined by fate, that’s why we could become husband and wife. But that affinity ended today. The Jade Emperor has called me back.”

“It’s been several years since I came to the mortal world. However, a year in the world of mortals is equal to a day in Heaven. Look at the clouds in the sky, they’ve started to thin out. In a moment, heavenly soldiers sent by the Jade Queen will come and escort me back. I must say farewell to you now. From now on, you have to take care of yourself.”

She quickly took out the multi-colored feather cloak and put it on. An anxious Cowherd grabbed Weaver Girl, shedding tears. At that moment, the sky cracked open and globes of light floated down, turning into heavenly soldiers.

The Custodian of the Gods came before them, saluted Weaver Girl and said: “My Lady, Weaver Girl, today we have received a compassionate order from the Jade Queen to escort you back to the Heavenly Palace.”

Weaver Girl nodded without a word, turned to look at Cowherd, then followed the heavenly soldiers and started to fly back with them.

Cowherd panicked and yelled out to Weaver Girl, “You can’t go!” He picked up a yoked sling with two baskets, and in each basket he put his son and his daughter. He then picked up the yoked baskets and ran to catch up. But how could he?

He watched as Weaver Girl flew higher and farther. Suddenly, Cowherd remembered the old ox’s words and hurriedly threw the skin over himself and the children. Instantly, he felt his whole body become lighter and he was able to fly.

He was actually flying high and skimming the clouds, rising up into the sky. Soon he would catch up to Weaver Girl and the others. Cowherd’s hopes grew and he kept shouting out to the Weaver Girl, “Wait for me!”

The chase was about to reach the Heavenly Gates when, all of a sudden, a great river billowed up in front of them. It was the legendary Celestial River. You know it as the Milky Way.

The heavenly river is boundless and several miles wide, with ferocious waves, and so deep that you cannot see the bottom.

Cowherd watched as Weaver Girl and the heavenly soldiers floated over the river. He lifted the basket sling and tried to cross it, too. But when he reached the shore he just couldn’t cross and was stuck on the other side. Worried, Cowherd silently shouted to Ox Brother, “Please help me!”

His pleas were answered as Cowherd heard a voice that sounded like the old ox’s near his ear: “My, dear, Cowherd, I can only help you up to this point. Here, the Celestial River separates mortals from immortals.”

When Cowherd heard this, he couldn’t help crying. He kept trying to cross, unwilling to leave, all the while crying out to the Weaver Girl.

From that time on, a bright shining star appeared next to the Celestial River, which people call Altair. This star is Cowherd on the earthly side of the river and the little stars beside him are his son and daughter. Year after year, he stands on the riverbank, looking at the far shore and calling out to Weaver Girl.

Legend has it that the Jade Queen was moved by Cowherd’s true love for Weaver Girl, so she allowed the faithful pair to meet once each year on the night of Qi Xi (the seventh day of the seventh month according to the Chinese lunar calendar).

On that day, thousands of magpies from the human world gather on the shores of the Celestial River and form a living bridge. Cowherd and Weaver Girl meet on this special bridge.

People say that on that night, if you listen from under a blackberry bush or in the quiet moonlight, you’ll hear the loving whispers of the reunited Cowherd and Weaver Girl.

It is also said that, on that particular day, you won’t be able to find a single magpie in the human world because they’ve all gone to the Celestial River to make the bridge.

This year, according to the solar calendar, Qi Xi is Aug 2. So, friends, on that day, be sure to listen carefully for the sounds of true love.