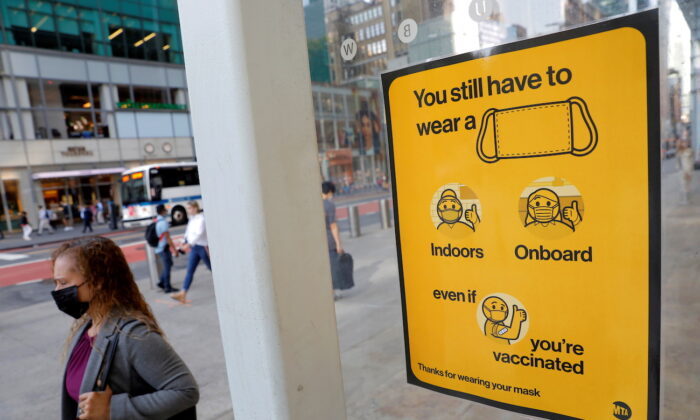 A poster alerting people to wear a mask is seen on a 42nd Street subway entrance in New York City, on Aug. 2, 2021. (Andrew Kelly/Reuters)
Viewpoints

Caste systems aren’t merely unjust; they are also ugly to behold. Commenting to me once on India’s caste system, when I was a child, my father said, “People in this country still use the word ‘untouchable,’ which is if you think about it a very unlovely term.”

While India’s caste system persists despite being outlawed, America traditionally hasn’t had a caste system.

Until now. We can see emerging, right here in America, a sharp divide between progressive elites and ordinary citizens. This divide can be seen in multiple areas. Progressive elites have high walls protecting their homes, even as they declare that “walls don’t work.” They have private security, even as they insist Americans don’t need guns to protect themselves. They somehow elude accountability even when they break the same laws that get ordinary citizens into major trouble.

Nowhere, however, is the new American caste system more evident than with COVID-19. Did you see Rep. Alexandria Ocasio-Cortez (D-N.Y.) at the Met Gala? The publicity focused on her “Tax the Rich” dress, but just as notable was the video, released by Vogue magazine, of AOC in full Cinderella mode, flanked by multiple attendants, straightening her hair, fixing her dress, holding up the long train, adjusting her heels. They were all masked; she was not.

This was hardly an isolated case. Shortly before the Met Gala, the Obamas held a massive party to celebrate Barack Obama’s 60th birthday. Again, the guests that included political leaders, business moguls, and Hollywood celebrities were all unmasked. The chefs, the servers, the valets, and the other staff were all masked. An upper caste and a lower caste, both playing their roles in Obama’s large tent.

Rep. Pramila Jayapal (D-Wash.), chair of the Congressional Progressive Caucus, also just had a birthday, and video showed a small, unventilated room in which Jayapal and her maskless friends all partied together. It was the same story with San Francisco Mayor London Breed, who violated her own mask mandate while partying at a club.

“I was feeling the spirit,” she explained, “and I wasn’t thinking about a mask.”

The Emmys, too, featured clip after clip of unmasked actors, producers, and directors walking the press photo line, and only when they crossed over to the other side could you see all the staff and attendants, masked, of course, taking them back to their seats. Asked about this double standard, Los Angeles County’s Health Department put out a statement saying that mask “exceptions are made for film, television and music productions,” because “persons appearing on the show are considered performers.” The virus, evidently, has no interest in infecting “performers.”

To understand what’s going on in its widest significance, consider the true meaning of the famous phrase in the Declaration of Independence: “All men are created equal.” What does this phrase mean? At one level, certainly, it means that we enjoy equality of rights. The Constitution goes on to specify not merely equality of rights but also equal treatment under the law.

This concept of equality of rights shouldn’t, as Abraham Lincoln emphasized, be confused with equality of outcomes. Human beings are obviously unequal in height, in speed, in beauty, in intelligence, even in moral character. An equal start in the race doesn’t mean, obviously, that all individuals or even all groups must hit the finishing tape at the same time.

Yet at the same time, there’s a broader meaning to the equality provision that goes beyond rights. We aren’t merely equal as human beings, we are “created” equal. This means that we are equally the children of God, and it follows from this that God loves us equally and therefore there’s an equal dignity in persons that derives, ultimately, from the fact that they’re created by a transcendent God.

How does this equal dignity play out in American life? It simply means that someone—say Jeff Bezos or Bill Gates—might have more money than you or me, but they aren’t better than you or me. In America, we have maids but not servants, and in many restaurants, we call even the waiter “sir,” as if he were a knight. The political philosopher Irving Kristol once said there’s no restaurant in America to which a CEO could go in the absolute assurance that he wouldn’t also find his secretary dining there.

So the Declaration of Independence affirms a social equality that is the very antithesis of a caste system. Yet precisely what our founding documents reject, the progressive elite, mostly made up of Democrats, is attempting to create for the first time in America a society divided into an elite upper caste and a mass lower caste, with separate rules applying to each group, in accordance with their caste status.