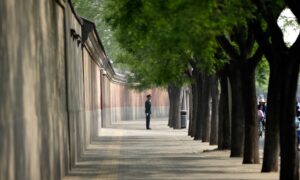 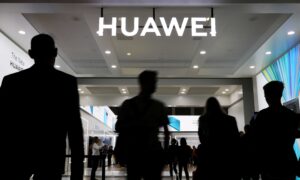 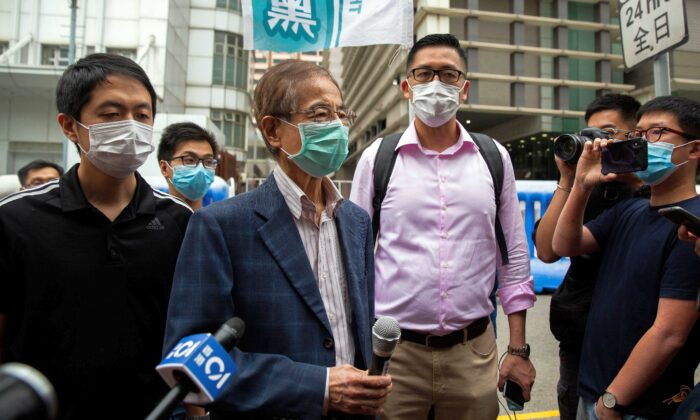 Former lawmaker and pro-democracy activist Martin Lee (C-L) talks to members of the media as he leaves the Central District police station in Hong Kong on April 18, 2020, after being arrested and accused of organising and taking part in an unlawful assembly in August last year. (Isaac Lawrence/AFP via Getty Images)
Thinking About China

Beijing’s calculated deceit regarding the COVID-19 pandemic’s November 2019 origin in Wuhan, China, to its ongoing 2020 A.D. global massacre provides Planet Earth’s residents with a preview of the Chinese Communist Party imperial world order that Chinese President Xi Jinping has promised to buy, slap together when no one with a brain is looking or impose via raw military terror by 2049.

A proto-historical footnote: 2049 would mark the 100th anniversary of the Chinese Communist Party mainland victory in the mid-20th century Chinese civil war. I emphasize the CCP’s mainland victory since the Nationalists retreated to the island of Taiwan. To the CCP’s chagrin, Taiwan remains a physical, political, economic and, yes, moral alternative to the communists’ Tiananmen Square genocidal police state.

Has Taiwan (Republic of China) been a perfect polity? No. Until the 1990s, the Taiwanese government had authoritarian streaks. Communist Cold War propaganda, which employs utopian notions, hyped Taiwan’s flaws.

Independence from whom? We return to the last 10 days and the pandemic. Beijing’s ChiComs call Taiwan a rogue province. The ChiComs promised Great Britain that Hong Kong would prove through 2049 that “one China, two systems” could exist.

Two to 4 million Hong Kongers participated in those protests. (The city has a population of about 7.5 million.) Why target the 15?

Beijing decided to “decapitate” the pro-democracy leaders, with the goal of terrorizing the rest of the city.

My guess: Beijing bets that global media focus on the pandemic serves as a cover from the dictatorship’s political strike. Following the Hong Kong 15’s arrest, the CCP’s Hong Kong lackeys claimed Beijing does not recognize legal restrictions that bar the CCP government from intruding on the city’s local political matters.

Goodbye Two Chinas, One System. We’ve another preview of the CCP’s disregard for treaties and contracts.

With the goal of arming readers with information that will help them identify individuals and entities bought off or blackmailed by the CCP, let’s start with the Wuhan lab bat test.

CCP-Beijing caws and brays that COVID-19/the Wuhan virus wasn’t created in the Wuhan National Biosafety Laboratory, which, for the record, the CCP built so it could appear to compete with U.S. research facilities, and which is in the proximity of the Wuhan wet market. But check the terms. By created they mean a man-made biological warfare weapon.

I am absolutely certain hotheads around the planet believe the virus is a bio weapon, but there’s no scientific evidence to support that claim.

However, man-made isn’t the question. The pertinent question: Did the virus escape Wuhan’s Level 4 (very high-risk) research lab via an incompetent technician who had a close encounter with a virus-ridden bat?

This is a reasonable question for anyone to ask—anyone who is not getting cash from Beijing or is what Vladimir Lenin and Mao Zedong called “a useful idiot.”

Another legit question that has yet to be answered: Why did CCP-Beijing lie about human-to-human transmissibility? Did the dictatorship want the rest of the world to suffer the physical and economic loss the Hubei province was suffering as of Jan. 20? (It may have been very bad as of Jan. 3.)

These are critical questions. Lives around the world have been lost, and more are at risk.

Instead of addressing these legitimate and grievous questions, China’s dictatorship imprisons Hong Kong democracy advocates and employs slimy rhetorical gimmicks that would get a used car salesman in Amarillo, Texas, laughed out of town.