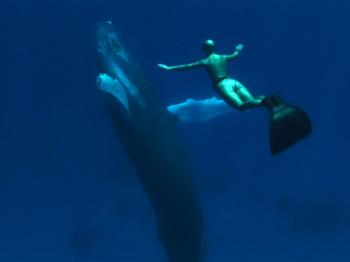 SWIMMING WITH WHALES: A scene from 'The Cove.' (Submarine Films)
Entertainment

Exposing the Treacherous Cove in ‘The Cove’

Sundance Film Festival winner The Cove is unexpected and shocking. The Cove is a documentary recounting the path of a group of people dedicated to the ideological cause of stopping dolphin hunting. The story is set in a heavily guarded cove in Taiji, Japan where a terrifying secret is hidden.

The Cove carries a strong message. The heroic protagonist and the intense plotline keep you tied to your chair, putting you in the incredible dangers of the moment alongside the characters who strive to fulfill their goal.

The movie begins with dazzling beams from a lighthouse followed by black and white photos that are disconcerting and shocking to the audience. After a few moments of alarm, the scene transforms into a wonderful undersea shot that places you into the setting of the story.

"We need to get in there and film what happens … we need to know the truth," said Ric O'Barry, protagonist of The Cove and former dolphin trainer. He has since become a fervent activist, trying to fulfill an emotional promise he made long ago to free captive dolphins around the world, no matter what it takes. The documentary takes us along O’Barry and his team’s tortuous and awe-inspiring journey toward their tough and noble goal.

"How many times have you been arrested?" O'Barry was asked. To which O’Barry replied, nonchalantly, "This year?" Although O'Barry never planned being an activist, he spearheaded an unforgettable path.

O'Barry himself captured and trained the five wild dolphins for roles in the popular TV series, "Flipper." The show was instrumental in making the public adore dolphins and later served as the catalyst in opening live dolphin shows all over the world. The dolphin shows are especially popular in Japan, whose waters are teeming with dolphins. Large scale dolphin hunting now occurs in the waters of the island nation.

As a result, O'Barry has dedicated his life to consistently trying to save the dolphin populations all over the world. In this documentary he opens the audience’s eyes, to the calamitous fate of the dolphins, whose friendly smiles are being changed to mournful despair. Their expressions are as unforgettable as The Cove.

This unique documentary moves from scenes of fierce intensity to depictions of understanding and inspiration to follow in O'Barry and his team’s footsteps and to stand beside them in their amazing journey of exposing the secrets that have been hidden from the world’s view on that secret cove.