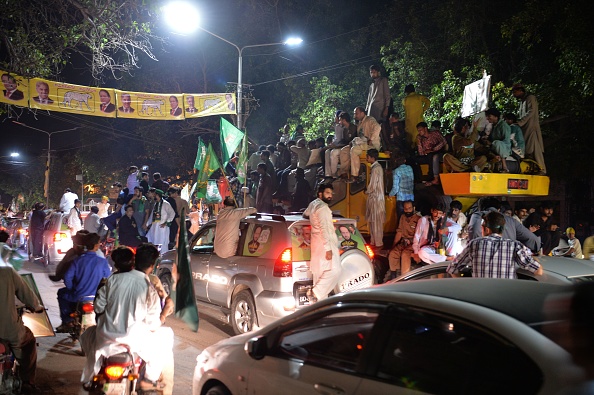 Supporters of former Pakistan premier Nawaz Sharif drive towards the airport ahead of the arrival of Nawaz from London, in a rally led by Shahbaz Sharif, Nawaz's younger brother and the head of Pakistan Muslim League-Nawaz (PML-L) party, in Lahore on July 13, 2018. (Photo credit should read AAMIR QURESHI/AFP/Getty Images)
World

These efforts include putting former Prime Minister Pervez Musharraf, himself the benefit of the last coup in 1999, on trial for conspiring to kill another politician, Benazir Bhutto. The most recent prime minister, Nawaz Sharif, was removed from office last year over a misdemeanor. It’s rumored that Pakistan’s military intelligence agencies delivered that tidbit to activist judges as part of a probe into the prime minister’s financial affairs.

This month, Sharif was found guilty of corruption and will be arrested if he reenters the country. The leftover politicians in his government are seriously weakened by the army. For example, the army essentially vetoed a government decision to fire an official by simply tweeting their disapproval of it.

It is important to remember that Pakistan is beset with so much corruption that the court securing victories against former prime ministers over minor infractions could be seen as a much-needed improvement. And our country is incredibly familiar with the strange way that Twitter can be used by leaders to influence and create policy, and that doesn’t mean we are in danger of a coup. Yet given those mitigating factors, the army’s intimidation and muzzling of various news stations that favor Sharif combined with the above factors still suggest a cause for concern.

Pakistan is often seen as a basket case that should have aid cut off by many Americans. It is true that they are often at war with themselves. But they are also an armed nuclear power that shares a tense border with India. In the past several months, they’ve exchanged artillery and small arms fire over their disputed border in Kashmir. They are a key ally in the U.S. war on terror in Afghanistan but have their own history of supporting extremist groups, including the LeT (Lashkar-e-Taiba) attack on Indian cities. In short, because of their key contributions and location, they should be our basket case.

Pakistan has a history of destabilizing coups, with the most notorious being that of General Muhammed Zia. He gained power in 1978 and ruled until 1988. He militarized the country, became a key ally against the Soviets in Afghanistan, and took the country in a much more radical religious direction, including stronger blasphemy laws used to persecute minorities. While there haven’t been any tanks rolling down the street this year, the army and its leadership continue to show a strong influence on the country’s democratic institutions, and this should be concerning to Americans, even if they are sick of hearing about the country’s dysfunction.

This article was first published in OpsLens.