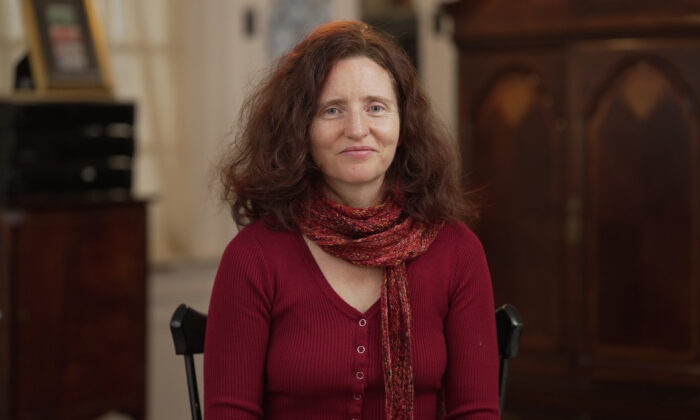 Gigi Foster, a professor at the University of New South Wales School of Economics and author. (Bao Qiu/The Epoch Times)
US Features

The Costs of COVID Overreach

“How many people would you be willing to kill in order to save one from COVID?” asks Gigi Foster. “That is essentially the trade-off. That’s the kind of question we should have been asking.”

In a recent episode of “American Thought Leaders,” host Jan Jekielek and Gigi Foster discuss pandemic policies that now appear to have been more deadly and harmful than the virus itself. Foster is a professor at the University of New South Wales’ School of Economics and co-author of “The Great Covid Panic: What Happened, Why, and What to Do Next.”

Jan Jekielek: Lockdown policies and various measures are being considered for World Health Organization policy and international health regulations. Do you have any thoughts on this?

Gigi Foster: This would override decades of epidemiological knowledge and public health wisdom, and would presumably affect countries all over the world. It isn’t scientific, and we don’t have proof that lockdowns worked, because there’s no evidence that keeping people away from each other slowed the spread of viral transmission. That simply isn’t true, epidemiologically speaking.

What is required is for good epidemiologists and caring doctors and other knowledgeable people to send petitions—and that’s happening all over the world now—to the World Health Assembly saying, “This is nonsense.” Essentially, it’s a political move put into the clothing of public health.

Mr. Jekielek: In large parts of the United States, and in places such as Canada and Australia, there’s still some level of lockdown, and the population thinks this is a good idea.

Ms. Foster: Yes. In Australia, we had some extreme political measures that were supported by the majority of the people. They wanted a solution to what they feared and were basically being played. A lot of Australians, as well as a lot of people from other countries, were sold a lie by politicians under the cloak of public health protection and science. The politicians recognized the opportunity to depict themselves as the savior of the people from this perceived threat: COVID-19.

The fear grew to the point where people forgot about other things that matter. They pressured the politicians to save them, and then we’ve just had savior story after savior story being sold in the name of public health. And if you don’t follow along, watch out because you’ll be labeled “antisocial.”

And in Australia, with the border closings and lockdowns, we had a huge amount of fiscal outlay to support people kicked out of their jobs. These actions have costs. Nowhere was that factored into policymaking. And how many people have we killed with our policy response?

That is the question: How many people would you be willing to kill in order to save one from COVID? That is essentially the trade-off. That’s the kind of question we should have been asking.

You have people who should have gone to hospital to get care for their strokes or their heart attacks, or who missed cancer screenings. That means you’re killing some people supposedly to save others. And do they not count, because they aren’t COVID deaths?

We should have taken an optimal policy response where we protected the people who were actually vulnerable to this virus: the older people, people with comorbidities. That was clearly the right thing to do.

But it’s disproportionate to focus solely on how many people we saved from COVID, without acknowledgment of the human costs of lockdowns, which are gargantuan relative to any benefit.

Mr. Jekielek: You’ve been in the business of calculating these costs. How does this come out?

Ms. Foster: For Australia, I’ve done a cost-benefit analysis of the lockdowns with the help of Sanjeev Sabhlok, who [is a former] Treasury economist for the state [government] of Victoria. He left his position, because they wouldn’t let him speak freely about this.

We have completed the analysis, and we have a 145-page summary on the web. After tabulating, calculating, and quantifying all the various dimensions of the lockdown policy costs, we found lockdowns [to be] 30 to 35 times more costly than what they delivered in benefits.

Ms. Foster: In terms of human life. At the moment, the number is actually 36 in the paper. But I say over 30, because, of course, estimates change. We do the best we can, as economists do in bureaucracies around the world, to evaluate a policy.

Cost-benefit analysis is the standard way policies implemented by governments get evaluated and then defended, but we’ve never seen it done for lockdowns. I still haven’t seen it, not in the U.S. and not in Australia. The reason is because anyone with an ounce of economics training who starts a cost-benefit analysis of lockdowns realizes very quickly, as I did in August 2020, that there’s no way lockdowns can pass the cost-benefit test. They were just too costly.

If you want to protect yourself from COVID, it’s better to consider taking care of your health. What are you eating? Are you going out in the sun? Exercising? Sleeping well? Drinking a lot of water? Are you feeling positive about your friends and family and invested in your relationships? These things promote our immunity. That’s what we should do instead of roping ourselves off.

Every day, I have a moment where I either want to punch the wall or break down in tears, because I recognize the pain we’ve created, and we’re going to be dealing with this for years. These kids who had their schooling disrupted, for example, are going to be behind forever. The babies and toddlers whose caretakers wore masks missed out on language acquisition opportunities.

There’s mass social complicity here, as well as personal complicity. Fear was driving us. And that fear also led into this sort of herd mentality.

Ms. Foster: “Men go mad in crowds and then they wake up slowly, one by one,” said one sociologist. That’s what we’ve seen. You can’t see it when you’re inside the group, but once you’re outside, you say, “Oh my gosh, those people literally can’t think.” They’ve outsourced their notion of what is true and moral to the group.

They aren’t thinking independently. That’s the scary part. Because in this period, it hasn’t been IQ or education that determined whether people were sucked into the crowd. It’s whether you were thinking and able to separate yourself from this mass movement. This is a common theme amongst those I have spoken to in the resistance. They have a personal sense of what’s true, and they’re accustomed to using their minds, to actually think.

I am putting the alternative viewpoint out there in public so that we can discuss the most draconian, liberty-destroying policies that have been implemented in our generation. A healthy society invites and encourages discussion on all the big issues.

Mr. Jekielek: I can’t help but think that a lot of the policy was based on models, on things completely separate from reality. It turns out that a lot of the variables introduced into the models were orders of magnitude wrong.

Ms. Foster: Part of the draw of the model, the seduction of the model, is that it seems a way to simplify what’s an incredibly complex reality, particularly now when we have this constant bombardment of information through the internet and social media.

If someone says, “OK, here I have reduced all of this complexity into this simple model,” it’s very seductive. This is one reason why politicians and even scientists get sucked into the idea that these narrow, stylized versions of reality, heavily laden with assumptions, are just as good as actually coming to terms with all of reality.

There’s so much we don’t know that it’s a fool’s errand to expect a simulated model to give you something superior to what’s happening in the world, particularly after you’ve had a few months to look at what’s happening and update your data.

But by that point, in the spring of 2020, politicians already had this line, “We’ve got to go to the lockdowns to control transmission.” Undoing that would have been very politically difficult for them. Once again, it’s politics, not public health.

Mr. Jekielek: I believe we’re going to get through this, but someday all sorts of people will have to come to terms with the fact that they participated in something terrible, that really hurt society and their children. How do we help people go through that?