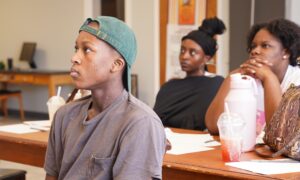 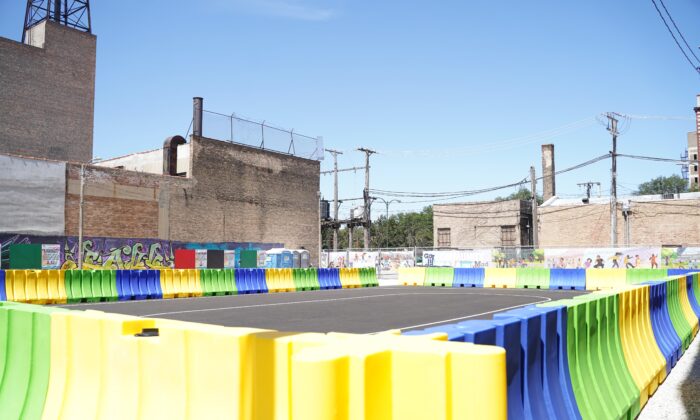 The roller rink on Madison Street in the West Garfield Park neighborhood in Chicago on the morning of Aug. 14, 2021. (Cara Ding/The Epoch Times)
Illinois

The Cost of a Safe Haven in an Open Drug Market

CHICAGO—Some locals call it the pill capital of Chicago. In broad daylight, drug peddlers associated with gangs hold up bags of drugs and solicit business from addicts from all parts of the city and beyond.

Several gangs divide up the area, which is on the West Side of Chicago, anchored by a major commercial corridor on Madison Street in the West Garfield Park neighborhood. Gang fights and shootings are common scenes. Few seniors or children walk by, for fear of getting caught in a crossfire.

It’s in the heart of all the drugs, gangs, and shootings that a brand new, million-dollar outdoor roller rink was built by the city with cannabis tax revenue, just ahead of summer—traditionally the most violent season in Chicago.

Mayor Lori Lightfoot said the rink gives the neighborhood kids a precious haven amid the drugs and violence.

“What we must be about, folks, is claiming the territory under our feet for peace! For our kids!” Lightfoot said on ribbon-cutting day, as sirens could be heard from ambulances driving by.

But many people who have lived or worked for decades near where the rink was built told The Epoch Times that no peaceful territory can exist outdoors among gang territories. To make the area safe for kids to come out and enjoy life, they say, crimes must go down first.

Shunte Campbell, who was born and raised on the block just north of the roller rink, said she would never take her kids to the rink.

“This is in the heart of guys selling and doing drugs. What if there’s a drive-by shooting? Bullets have no eyes.” Campbell told The Epoch Times.

Four years ago, she came home to find a man dying from gunshot wounds in front of her house. Her kids were all hiding in the bathtub, trembling, she said. Shortly after that, she moved her family to a suburb west of Chicago.

The West Garfield Park neighborhood has the highest number of shootings per capita, is one of the top five in narcotics sales, and has the fourth-lowest per capita income among 72 Chicago neighborhoods.

Lightfoot handpicked the neighborhood to be the first to receive an investment—in this case, a roller rink free to the public—under her signature violence reduction program called Neighborhood Activation Initiative. Quite a few community organizations rallied behind her strategy, such as Garfield Park Rite to Wellness Collaborative, and Institute for Nonviolence Chicago.

Covered tall fences obscure the roller rink. A security desk sits at the narrow entrance, and any visitor must pass a metal detector before entering. At any given time, four to six security guards watch over the venue, which is the size of a typical storefront. One told The Epoch Times that he gets paid $15 an hour.

On Aug. 14, the rink guards received training about active shooters, given by a security manager from Chicago Park District. Since they’re unarmed, they learned how to fight active shooters with folding chairs, pens, and hot coffee.

Around 4 p.m. that day, when traffic would be the highest according to rink manager Tyleel Robinson, three boys skated on the rink—including two not from the neighborhood. Robinson said about 25 people would skate on a typical afternoon; he wasn’t sure why on that day only three came.

Alicia Young, a neighborhood resident who took her 6-year-old son to skate, told The Epoch Times that she felt safe and relaxed.

“I like it. I don’t feel I’m in West Garfield Park, I feel like I’m in Oak Park [a suburb west of Chicago].”

Just across the street from the rink, drug peddlers associated with the Black Souls gang conduct daily business. To the east, it’s the Vice Lords and Four Corner Hustlers gangs; to the west, it is the Gangster Disciples. Mike Remert, the longtime manager of MP Mall just southeast of the rink, drew a map of nearby gang territories for The Epoch Times. Every day, drug addicts gather in his hallways and get high with newly purchased street products.

Remert has been vocal about his opposition to the rink, and it’s personal. His granddaughter, Ariel, was caught in a crossfire years ago on the block just north of the rink. It left Ariel paralyzed at age 18.

“The mayor could go two blocks east to put it in the big Garfield Park. Why [put] it right in the heart of an open drug market? What is she [hoping for]? For more tragedies to happen?” Remert told The Epoch Times.

Anthony Clay, a pastor who was born and raised in West Garfield Park, worries that the blatant drug dealing around the rink and the nice cars those dealers drive might lure some kids into street life, just as they lured him in the 1980s.

Clay, 50, joined a gang at age 10 after his mother died; his father was not around for him. He learned to fend for himself through drug dealing, and he became a heroin addict. Having gone to prison four times and lost more than 20 friends to drug overdoses and shootings, Clay went back on the right path at the encouragement of his current wife.

“You’re going to put the youth around nothing but negative stuff. What are they seeing that is going to help them go to where they want to go? Because they have dreams as we all do.” Clay told The Epoch Times.