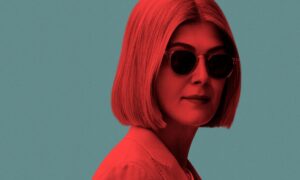 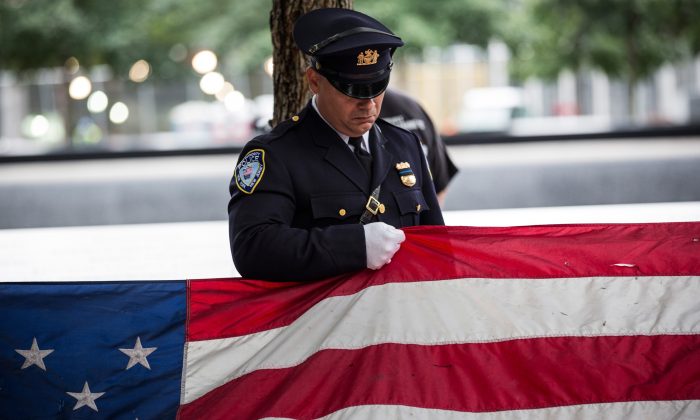 A Port Authority Police officer prepares to present an American flag that survived the terrorist attacks of Sept. 11, 2001, during an anniversary ceremony in New York City on Sept. 11, 2015. (Andrew Burton/Getty Images)
Opinion

Recently, I shared remarks to an assembly of 150 police chiefs, community leaders, private security directors, and law enforcement officials including the FBI, on American policing issues.

These remarks were delivered at the Bergen County Police Chiefs Association (BCPCA) event in Alpine, New Jersey, on April 21.

The BCPCA is comprised of over 70 police agencies within the county; numerous city, state, and federal law enforcement agencies, private security professionals, and community leaders.

This unity of action from the public and private sectors is reflected in their mission statement:

“To secure a closer official and personal relationship among police officials in the County of Bergen; to secure unity of action in police matters; to elevate the standards of police institutions; to strive for advancement among all lines that pertain to the prevention and to the detection of crime and the promotion of police efficiency in general.”

Police-Community Crisis: Rise to the Occasion

The mission statement is complemented by charitable community initiatives for the needy, veterans, students, families, hospitalized, and schools.

BCPCA: A History of Community Policing

My remarks for the BCPCA crystallized an upcoming initiative that I will develop for the police and people of Bergen County.

The initiative will be titled “The Cop: America’s Ethical Guardian.” It will address critical policing issues covered in many of my Epoch Times articles over the last two years. These articles encourage police to serve as ethical guardians, and to have a full force dedication to enhancing police-community relations.

As a member of the BCPCA for the last 15 years, I have been honored to serve on numerous policing initiatives which has included six years as a primary community policing instructor and presentations at five conferences.

Each conference was filled to capacity with over 250 attendees and addressed community policing, terrorism prevention, school violence prevention, crisis management, and ethics.

This unity of effort represents the heart of addressing police-community issues not only in New Jersey, but throughout the county.

According to the National Law Enforcement Officers Memorial Fund (NLEOMF), there are over 900,000 sworn law enforcement officers serving in the United States, the highest ever figure.

These tragic statistics remind us of the dangers faced by our police, and the importance of not only appreciating their efforts, but working collaboratively in our communities.

A Clarion Call for Police-Community Collaboration

As detailed in my Epoch Times, Sept. 4, 2015 article column titled “Policing Dangers Demand Community Collaboration,” whenever a law enforcement official is contemptuously murdered, the heart of America is wounded.

The article sounds a clarion call to enhance police-community collaboration by emphasizing vigilance among the police and community members.

Collaboration, as well as ethical principles, is further emphasized in my “Principles of American Policing.”

The first principle is as follows:

“Being pro-police and pro-community are inseparable, indefatigable, and pre-eminent. Police must at all times remain fully committed to protecting and serving the public through character, ethics, and leadership that is total and wholehearted. Police must be guided by a moral compass that honors the community, Constitution, and Bill of Rights.”

As memorialized by incidents throughout America, many of which were videoed, it would be naive, disingenuous, and irresponsible to minimize various police controversies, protests, and concerns.

These issues must be honestly addressed by law enforcement and law-abiding community members.

Commissioner William J. Bratton during an Oct. 2, 2014 retreat of over 800 top department executives, served as a model to American policing through his candid remarks.

In his customary transparent honesty, Bratton addressed the small percentage of NYPD officers who are “poisoning the well” and needed to be weeded out.

This is a defining moment for transforming American policing. We will be on the path of reawakening the nation by encouraging police in their critical role as ethical guardians, giving them the assistance they deserve, and intensifying our resolve for enhancing police-community cohesiveness.