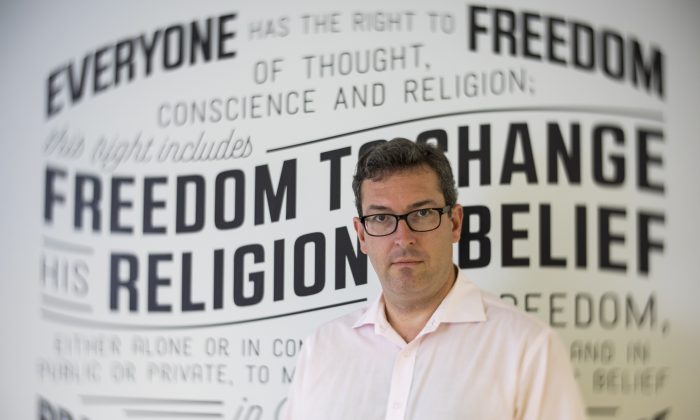 No two days are the same for Benedict Rogers, who has been a human rights activist for 23 years. (Si Gross/Epoch Times)
UK

Benedict Rogers has missed a bomb by five minutes in Islamabad, had friends who have been assassinated for defending human rights, and been deported from Burma – twice.

His job is unusual, not just because it’s so unpredictable, but because one of his main aims is for it to no longer have to exist.

“Sadly,” he said, “I think I will be in employment for many years.”

Rogers has been a human rights activist for 23 years, firstly in his spare time as a student and journalist, and then full time with Christian Solidarity Worldwide.

There is a phrase imprinted on the wall behind him that echoes the tone of our interview: “Speak up for those who cannot speak for themselves.”

“I think as human beings we have a responsibility, particularly those of us who have freedom, to use that freedom to speak up for others who can’t,” he said.

The case of a 15-year-old Burmese boy has always stayed with Rogers. They met in the jungle at a camp for people who were internally displaced.

The boy had seen his parents killed by the Burmese army. Then he was forced to be the army’s porter, carrying heavy ammunition and supplies. He was severely beaten, particularly when he was very tired and lagging behind. The boy had eventually escaped to the camp.

As a human rights activist, those words touched Rogers deeply.

“It sums up what I try to do, which is to try and make sure the world doesn’t forget people like him, whether it’s Burma or in China, or any of the other countries that I work on,” he said.

For those who want to become involved in human rights work, Rogers suggests getting to know people who have survived abuses or who are here as refugees and asylum seekers, and hearing their stories firsthand.

“I think my motivation has grown every time I meet people face-to-face who’ve suffered or are suffering. I’m inspired often by their courage, by their faith and their persistence despite the suffering that they’ve had,” he said.

He’s never thought of stopping. “There are of course times when it can be frustrating or depressing or one might ask oneself ‘is what I’m doing making any difference?’ I’ve had those moments. But I’ve never had a thought that I want to give up.”

A writer as well as a human rights activist, Rogers has written several books including Burma: A Nation at the Crossroads and Than Shwe: Unmasking Burma’s Tyrant.

A crime that’s hard to digest

Last year, Rogers helped pen a report on forced organ harvesting in China for the Conservative Party Human Rights Commission, an organisation that he co-founded in his spare time.

The commission was presented with a jigsaw of complex evidence, suggesting that forced organ harvesting in China is happening on a large scale.

“It’s one of the hardest human rights issues to be involved with,” Rogers admits.

It is feared that the organ harvesting is carried out live, where the victim dies in the process. The victims are thought to be prisoners of conscience – Uyghur Muslims, Tibetan Buddhists, house Christians, and – mainly – Falun Gong practitioners.

Falun Gong is a traditional Chinese spiritual practice that has been brutally suppressed in China. Indeed, 20 July marks 18 years since the persecution against the practice began.

Investigative journalist Ethan Gutmann has said in the past: “Clearly the [Chinese] transplant system has grown in harmony with the incarceration of Falun Gong.”

“It’s hard to understand why it’s happening,” said Rogers. “I think there’s a commercial interest; they [the Chinese Communist Party] benefit financially from the extraction of organs, and then sell them for transplant.

“The Communist Party of China has no respect at all for human rights and human dignity. Particularly the human rights of anyone that it regards as in some way a threat, and so there appears to be no limit to their inhumanity,” he said.

Apart from the harrowing nature of the crime, Rogers says it’s a difficult topic to advocate on because the victim is dead, and there are usually no witnesses except the medical staff who have been involved. Any signs of the operation are quickly cleaned up afterwards.

“When I go to Burma I can interview refugees who can tell me directly what they’ve been through. That’s not the case with organ harvesting,” he said. “In organ harvesting there aren’t really survivors or witnesses.”

Yet there is “very strong circumstantial evidence,” he says. Much of it is found in the comprehensive report Bloody Harvest/The Slaughter: An Update, by human rights lawyer David Matas, former Canadian secretary of state David Kilgour, and investigative journalist Ethan Gutmann.

For example, there have been Falun Gong refugees who have reported having medical checks in prison, that were clearly designed to assess the health of their organs for organ harvesting.

“What I’ve been pushing policymakers to do is to hold an international inquiry to test the evidence that is available and to hold China accountable,” said Rogers.