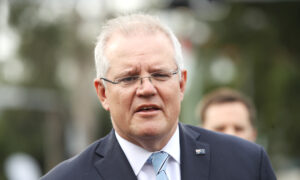 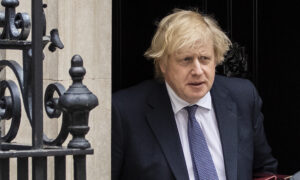 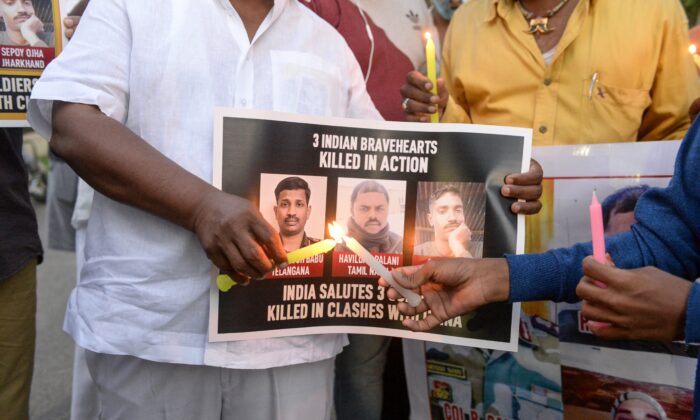 Members of City Youth organizations hold posters and light candles to pay tribute to the soldiers who lost their lives following a recent clash between India and China, in Hyderabad on June 17, 2020. (Noah Seelam/AFP via Getty Images)
Viewpoints

The Connection Between China’s Unmourned Soldiers, Its Theft of Intellectual Property

China hasn’t disclosed how many of its citizens died in the border clash with India on June 15. India staged a memorial service for those of its people who perished in the conflict, while Chinese lamentations were limited to Weibo, the Chinese version of Twitter.

Beijing’s effort to keep secret the identities of their fallen soldiers is part of a totalitarian impulse to control all information—to deny freedom. That denial helps account for the Chinese regime’s need to steal rather than invent technology.

Recently, a Chinese professor who cooperated in smuggling U.S. technology to the People’s Republic of China was arrested.

The Epoch Times reports: “A federal judge in San Jose, California found Zhang Hao, 41, guilty after a four-day trial. … According to the Justice Department, Zhang met his co-conspirator, Pang Wei, while studying for a doctorate in electrical engineering at the University of Southern California, where they both conducted research on radio-filtering technology with funding from the Defense Department. After graduating in 2006, Zhang went to work for Skyworks Solutions Inc., based in Massachusetts, and Pang was employed by Avago in Colorado.”

They formed an effective partnership. Shortly after their graduation, the pair created a company in China that vied with the U.S. firms.

“Prosecutors said that in October 2006, Zhang and his co-conspirators started a business in China to compete with Avago and Skyworks—while Zhang and Pang worked at those companies,” The Epoch Times reports. “They stole formulas, source code, technical specifications, design kits, and other documents marked as classified or proprietary from their American employers, the Justice Department said.”

Zhang will face sentencing on Aug. 31.

The essence of the scheme derived from the totalitarians’ recognition that they weren’t the equal of the Americans when it came to the creation of new technology. Hence, the Soviets mounted a substantial program of subversion against U.S. technology; China has followed in those footsteps.

Although there are three times as many Chinese as Americans, and a great deal more young people educated in high-tech, a very high percentage of Chinese advanced technology is stolen from the United States.

Creativity depends on freedom, and the Chinese don’t have it, as we see from the way they deal with Hong Kong. The Chinese central government is clamping down on free speech in Hong Kong, making sure that decision-making is centralized in Beijing. In other words, the end of free speech.

It may well be that the central question of this moment is whether or not the democracies have the will to protect their intellectual property. I don’t know the answer. Time will tell.

It will be a tough battle.

If we do have the will to engage in this crucial battle, the key to our survival lies in our intelligence communities—their ability to identify our active enemies—and the willingness of our judicial systems to prosecute the thousands of thieves who are working to infiltrate our networks of researchers and laboratories.

At the moment, our network of research and development laboratories prides itself on its global outreach, which favors enemy espionage. This applies to laboratories run by corporations or universities, whether inside the United States or abroad.

On the other hand, we have defeated a well-disciplined enemy network in the recent past, discovering in the process that the Soviet people actually cherished freedom. Once they had a chance to be truly free, they unhesitatingly took it, and their talents were spread around the world. Are the Chinese cut from the same cloth?

Michael Ledeen is freedom scholar at Foundation for Defense of Democracies. He has served as a consultant to the National Security Council and the departments of State and Defense, and as a special adviser to the Secretary of State. He is the author of 35 books, most recently “Field of Fight: How to Win the War Against Radical Islam and Its Allies,” co-authored with retired Lt. Gen. Michael T. Flynn.