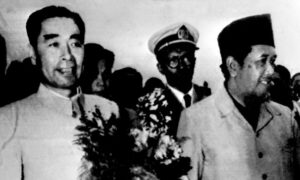 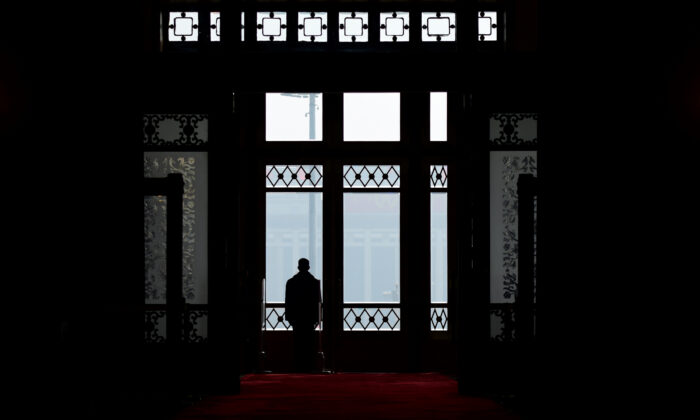 A security guard stands at the entrance of the Great Hall of the People during the fourth plenary session of the first session of the 13th National People's Congress in Beijing on March 13, 2018. (Wang Zhao/AFP via Getty Images)
Chinese Regime

Surveillance, intimidation, and manipulation act as the grease for the gears that drive all communist systems. Whether it was the regimes of the past, or the leading communist country of our modern day, the systems all share these characteristics.

For communist leaders to control those below them, they are fully dependent on whoever controls information. In China, that’s the job of the state secret police, according to an article published through the Chinese Epoch Times on July 21 by Chinese internal affairs analyst Cheng Xiaonong.

On July 15, Chinese leader Xi Jinping assigned a military chief of staff to be the new director of China’s internal spy bureau, according to state-run media reports. The new director, Zhou Hongxu, is now in charge of the Central Security Bureau (CSB).

The CSB has similar strongarm intimidation tactics as other communist secret police from the past, such as the KGB or Stasi. The CSB is colloquially referred to as the “bodyguard” for the Chinese Communist Party’s (CCP) headquarters, as it nominally functions to protect political officials.

Cheng wrote that the promotion is highly unorthodox, usurping the usual promotion order. Further, Hong’s experience is in the military, not in surveillance activities. But according to Cheng, even though the choice may further jeopardize Xi’s lifelong reign over the CCP, the Chinese leader has other priorities.

While scant public details are available on Zhou or his allegiance to Xi, Cheng points out that the hiring process was unprecedented.

Before Zhou was appointed, the previous director had stepped down in 2019. The CSB leadership position remained vacant for a year and a half. Cheng said that since the bureau was established in Mao’s time, it has never been without a director.

Additionally, Cheng said that whoever is in charge of China’s intelligence community is the de facto leader of the CCP. He said that is because whoever can control the largest number of senior officials will have the most power in the party. Monitoring officials, which is what the CSB is responsible for, is crucial to this control.

Cheng said that under this particularly Maoist system, rebellion among senior officials becomes a precious act. Officials can’t meet in private because security secretaries will always report their actions. They further contact through phones, since private use is prohibited, and the phones are also under surveillance.

In this way, the CSB acts not only as the protector of officials, but also as a 24-hour surveillance system.

Monitoring and controlling politicians is the source of the CCP leader’s power. Cheng said that it is likely Xi did not trust the next candidates in line for promotion in the bureau hierarchy. Cheng added that power struggles have very likely once again started at the top tiers of the CCP.

According to state-run outlet DW, appointing someone outside of the CSB was to avoid hiring someone who had long been involved in power struggles at the top of the CCP. Media reporting was otherwise limited on Zhou assuming the position.

Cheng said that Xi’s move is a double-edged sword. Cheng said that outside hiring is a method for Xi to tackle these high-level power struggles. However, it also throws the self-interest of high-ranking CSB officials into question, as future promotions are no longer guaranteed to them.

Cheng warned this could further sow doubt in Xi’s leadership.

Daniel Holl is a Sacramento, California-based reporter, specializing in China-related topics. He moved to China alone and stayed there for almost seven years, learning the language and culture. He is fluent in Mandarin Chinese.