The Communist Push to Eliminate Moderates and Incite Conflict 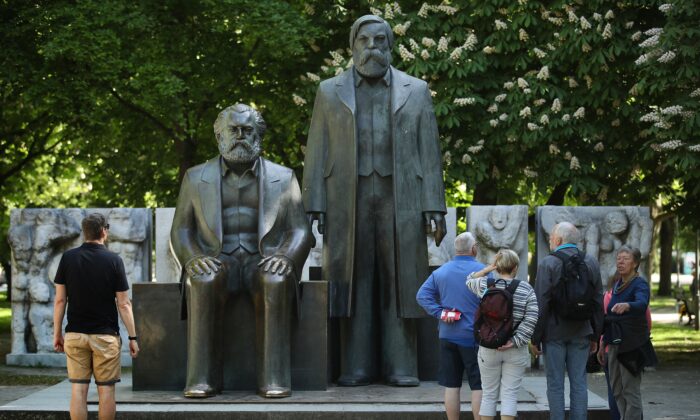 Visitors look at statues of Karl Marx (L) and Friedrich Engels in a park in Berlin, Germany, on May 4, 2018. The illusions that many in the West hold about socialism today mirror the experiences of countless impressionable young people who embraced communism in the last century in the Soviet Union, China, and elsewhere. (Sean Gallup/Getty Images)

At its roots, communism is an ideology that strives on the capitalization of extremists. Under communist rule, moderates are not allowed to exist. You either support the communist revolution or risk being labeled as an enemy of the people.

This idea of dividing and conquering can be seen in successful communist revolutions throughout history. Whether it’s Russia, China, or Cuba, communists followed the same steps to turn a population against one another.

They first identify an issue to be used as a vehicle to gain supporters and call for a violent revolution. They then polarize that issue, forcing people to choose sides. By eliminating the middle, only the extremists of either faction remain. Conflict will inevitably erupt between these factions, weakening the established systems and allowing communist dictators to seize power.

When Lenin incited the Russian Revolution in 1917, he categorized people into two categories. There were those who supported his revolution and those who did not. There was no middle ground. If you were moderate, you conflicted with the revolutionary ideals and were marked for destruction. A brutal 6-year struggle ensued, resulting in an estimated 7 to 12 million deaths. But when the dust settled, Russia was ruled by a communist dictatorship for the next half-century.

This trend of using violence and destruction as a tool has been seen in other communist revolutions as well.

During Mao Zedong’s Cultural Revolution in China, extensive campaigns wiped out intellectuals and scholars who were seen as a threat to communist teachings. Red Guards, a name given to the paramilitary social movement mobilized and guided by Chairman Mao Zedong, began to organize “struggle sessions” and purges across China. These were designed to root out and eliminate any threats to Mao Zedong’s unquestioned rule.

During this time, moderates and opponents of the party were sent to “re-education” camps. Mao’s Red Guards faced off against “rebel groups” across China. And traditional Chinese culture, one of the longest in history, was almost completely wiped out in a few short decades. But as with every communist revolution, after millions of deaths and years of suffering, the people do not become free but are instead trapped under communist tyranny.

Communism claims to build a “heaven on Earth,” but what it delivers is little more than a glorified prison. From the years of violence and destruction, people become conditioned to obey the party without question. And that is the ultimate goal of communism, not to create a utopia but to subject people to its tyranny.

But what led to this destructive belief? How did its violent revolutions begin? And how is it that communism continues to find popularity? In this special series exclusively on Epoch TV, award-winning investigative reporter Joshua Philipp uncovers the dark origins of the communist ideals that we see today.

Ryan Yang
Based in New York City, Ryan Yang writes thorough opinion pieces that tackle tough issues in today's world. With his background in history, Ryan specializes in exploring lessons from the past while providing compelling commentary on current events.