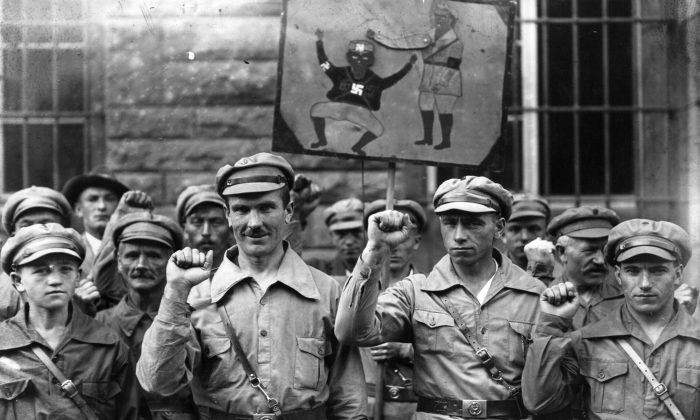 Members of the far-left Antifa extremist organization give a clenched fist salute on Sept. 1, 1928. The group's original intent was to bring out a communist dictatorship in Germany. (Fox Photos/Getty Images)
The Dead End of Communism

The extremist anarchist-communist group Antifa has been in the headlines because of past violent clashes in Charlottesville, Virginia. Yet while the organization has been applauded by some left-leaning news outlets for including white nationalists and neo-Nazis in its list of targets, the organization wasn’t always about targeting “fascism,” as it claims.

The organization was initially part of the Soviet Union’s front operations to bring about communist dictatorship in Germany, and it worked to label all rival parties as “fascist.”

The organization can be traced to the “united front” of the Soviet Union’s Communist International (Comintern) during the Third World Congress in Moscow in June and July 1921, according to the German booklet “80 Years of Anti-Fascist Action” by Bernd Langer, published by the Association for the Promotion of Anti-Fascist Culture. Langer is a former member of the Autonome Antifa, formerly one of Germany’s largest Antifa organizations, which disbanded in 2004.

The Soviet Union was among the world’s most violent dictatorships, killing an estimated 20 million people, according to “The Black Book of communism,” published by Harvard University Press. The Soviet regime is second only to the Chinese Communist Party under Mao Zedong, which killed an estimated 65 million people.

Anti-fascism is a strategy rather than an ideology.
— Bernd Langer, former member, Autonome Antifa

The idea of the united front strategy was to bring together left-wing organizations in order to incite communist revolution. The Soviets believed that following Russia’s revolution in 1917, communism would next spread to Germany, since Germany had the second-largest communist party, the KPD (Communist Party of Germany).

It was at the Fourth World Congress of the Comintern in 1922 that the plan took shape. Moscow formed the slogan “To the Masses” for its united front strategy and sought to join together the various communist and workers’ parties of Germany under a single ideological banner that it controlled.

“The ‘unified front’ thus did not mean an equal cooperation between different organizations, but the dominance of the workers’ movement by the communists,” Langer writes.

Benito Mussolini, a Marxist and socialist who had been expelled from Italy’s Socialist Party in 1914 for his support for World War I, later founded the fascist movement as his own political party. He took power through his “March on Rome” in October 1922.

In Germany, Adolf Hitler became head of the National Socialist German Workers’ Party (Nazi Party) in 1921 and mounted a coup attempt in 1923.

The KPD decided to use the banner of anti-fascism to form a movement. Langer notes, though, that to the KPD, the ideas of “fascism” and “anti-fascism” were “undifferentiated,” and the term “fascism” served merely as rhetoric meant to support their aggressive opposition.

Both the communist and fascist systems were based in collectivism and state-planned economies. Both also proposed systems wherein the individual was heavily controlled by a powerful state, and both were responsible for large-scale atrocities and genocide.

The 2016 annual report by Germany’s domestic intelligence service, the Federal Office for the Protection of the Constitution (BfV), notes the same point: From the viewpoint of the “left-wing extremist,” the label of “fascism” as pushed by Antifa often does not refer to actual fascism, but is merely a label assigned to “capitalism.”

While leftist extremists claim to be fighting “fascism” while launching their attacks on other groups, the report states the term “fascism” has a double meaning under the extreme-left ideology, indicating the “fight against the capitalist system.”

This held true from the beginning, according to Langer. For the communists in Germany, “anti-fascism” merely meant “anti-capitalism.” He notes the labels merely served as “battle concepts” under a “political vocabulary.”

A description of Antifa on the BfV website notes that the organization still holds this same basic definition of capitalism as being “fascism.”

“They argue that the capitalist state produces fascism, or at least tolerates it. Therefore, anti-fascism is directed not only against actual or supposed right-wing extremists, but also always against the state and its representatives, in particular members of the security authorities,” it states.

Langer notes that historically, by labeling the anti-capitalist interests of the communist movement as “anti-fascism,” the KPD was able to use this rhetoric to label all other political parties as fascist. Langer states, “According to this, the other parties opposed to the KPD were fascist, especially the SPD [Social Democratic Party of Germany].”

Thus, in what would today be considered ironic, the group that the communist “anti-fascists” most heavily targeted under their new label of “fascism” was the social democrats.

On Aug. 23, 1923, the Politburo of the Communist Party of Russia held a secret meeting, and according to Langer, “all the important officials spoke out for an armed insurrection in Germany.”

The KPD was at the front of this call, launching a movement under the banner of United Front Action and branding its armed “anti-fascist” wing under the name Antifaschistische Aktion (“Antifascist Action”), which Antifa still carries in Germany, and from which the Antifa organizations in other countries are rooted.

At this time, Hitler and his Nazi Party had begun to emerge on the world stage, and the Nazi Party employed a similar group to Antifaschistische Aktion for political violence and intimidation, called the “brownshirts.”

Antifaschistische Aktion, meanwhile, began to attract some members who opposed the arrival of actual fascism in Germany and who did not subscribe to—or were potentially unaware of—the organization’s ties to the Soviet Union.

However, the violence instigated by Antifaschistische Aktion largely had an opposite effect. The ongoing tactics of violence and intimidation of all rival systems under the Antifa movement, along with its violent ideology, drove many people toward fascism.

“The Communists’ violent revolutionary rhetoric, promising the destruction of capitalism and the creation of a Soviet Germany, terrified the country’s middle class, who knew only too well what had happened to their counterparts in Russia after 1918,” writes Richard J. Evans in “The Third Reich in Power.”

Anti-fascism is directed not only against actual or supposed right-wing extremists, but also always against the state and its representatives, in particular members of the security authorities.
— Germany's Federal Office for the Protection of the Constitution

“Appalled at the failure of the government to solve the crisis, and frightened into desperation by the rise of the Communists,” he states, “they began to leave the squabbling little factions of the conventional political right and gravitate towards the Nazis instead.”

Langer notes that from the beginning, the KPD was a member of the Comintern, and “within a few years, it became a Stalinist party,” both ideologically and logistically. He states that it even became “financially dependent on the Moscow headquarters.”

Leaders of the KPD, with Antifa as their on-the-ground movement for violence and intimidation of rival political parties, fell under the command of the Soviet apparatus. Many KPD leaders would later become leaders in the communist German Democratic Republic, including of its infamous Ministry for State Security, the Stasi.

As Langer states, “anti-fascism is a strategy rather than an ideology.”

“It was brought into play in Germany in the 1920s by the KPD”, not as a legitimate movement against the fascism that would later arise in Germany, but instead “as an anti-capitalist concept of struggle,” he writes.

Christian Watjen contributed to this report.