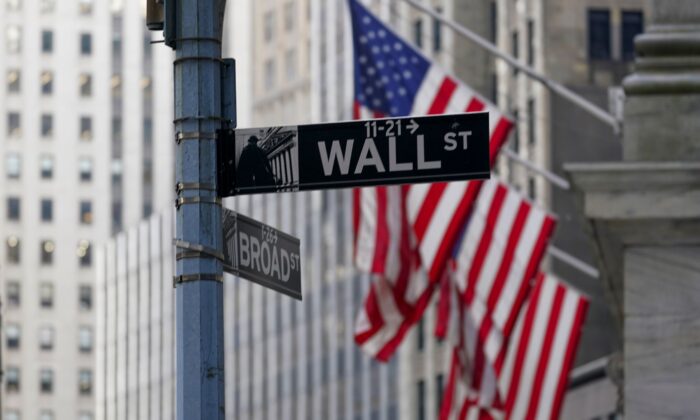 The Wall St. street sign is framed by the American flags flying outside the New York Stock exchange in the Financial District on Jan. 14, 2022. (Mary Altaffer/AP Photo)
Analysis

The Commotion About Carried Interest Tax

It’s a capital gains tax applied to an arcane concept—irrelevant to 99 percent of taxpayers—that has been debated in the halls of Congress for more than a decade. Taxing carried interest at the lower capital gains rate has few backers in Washington, yet it has proven hard to kill. Both President Obama and President Trump promised to increase carried interest tax, but neither presidents were able to execute on that goal.

What is carried interest? It is the profits private equity, venture capital, and hedge fund investment managers earn from their investments, after certain performance thresholds have been reached (e.g., a preferred return). Most carried interest is structured as 20 percent after a certain hurdle has been reached by investors (usually 8–10 percent return). In other words, carried interest is the share of profits the investment manager partakes in for good performance. The term came from Renaissance Venice ship captains, who were paid an “interest” in a portion of the ship’s valuable cargo for safe passage—e.g., carrying the cargo.

That’s a bit of arcane financial knowledge that most people could care less about. But what makes carried interest a national political talking point is the tax rate applied to such gains. Fund managers pay a reduced (usually 20 percent) capital gains tax on such profits, not the usual (and much higher) ordinary income tax rates.

The tax law changes made by the Trump administration in 2017 made it slightly more difficult for private fund managers to enjoy the lower capital gains rate by mandating that funds must hold their investment from one year to three years to enjoy the lower tax rate. But this has had little practical impact because most private equity funds hold their investments longer than three years.

Mainstream media calls it a carried interest “loophole,” as though it were a tax-dodging scheme akin to illegal tax shelters. But there is no loophole: the capital rates rate is actually written in the tax code. Others say it is akin to a “subsidy” to rich Wall Street tycoons. But it’s not a “subsidy,” as any tax—even at 1 percent—is still a tax; the government isn’t giving money to private equity managers to encourage investments, in which case “subsidy” would be the right term.

The Government Aims at Wall Street

The reason we care about this is because the U.S. government is in need of cash. Any spending bill, such as the one President Biden is looking to pass, needs to be funded. And politicians believe that the tax rate applied to carried interest income is too low. Increasing the rate applied on this income stream—which only hurts already-wealthy Wall Street investment managers—is a “low-hanging fruit” type of solution to raise this much-needed cash.

After all, everyone hates Wall Streeters, right?

While that may be a bit too “on the nose,” it is the most straightforward explanation as to why carried interest tax is a national talking point. Nonetheless, let’s attempt to debate the merits of carried interest and examine how it should be taxed.

Capital gains on carried interest derived from innocuous origins. It was to reward entrepreneurs and financiers who risked their own money to build businesses that might not pan out. So, when there are profits at the end, the tax code rewards these usually long-term profits by applying a lower tax rate. After all, building businesses and creating wealth is hard.

The American Investment Council, a lobbying group for private equity, attempts to make this argument. It says that increasing taxes on carried interest could negatively impact private equity investments into small- to medium-sized businesses, which are the biggest drivers of jobs growth in America.

But should this concept truly apply to private equity, venture capital, and hedge funds? For the most part, no.

Contrary to what the private equity industry says, its firms actually put up very little of their own capital. If investments turn sour, the third-party investors usually suffer. At worst, investment managers may earn no carried interest and lose the small co-investment they put in (usually 1–5 percent of the fund’s total capital). In addition, managers are still paid ongoing management fees and other fees, which are usually not directly affected by performance of the underlying investments.

I’m not arguing that this is a great set of circumstances, but private equity fund managers are certainly not putting a substantial amount of their own capital at risk. By this argument, carried interest should be taxed at the ordinary income tax rate.

The one niche area where one could argue keeping the lower tax rate on carried interest is perhaps in real estate development. In some cases, the general partner (the developer) personally guarantees all project-level debt and guarantees timely completion. These long-term projects often create new tangible assets, such as a housing project, an office building, or a mall, that a community can enjoy.

In essence, carried interest is similar to an at-the-money call option. The payoff can be enormous. There is a cost to failure, but it’s relatively small. And to tax the gains at the capital gains rate is too generous.