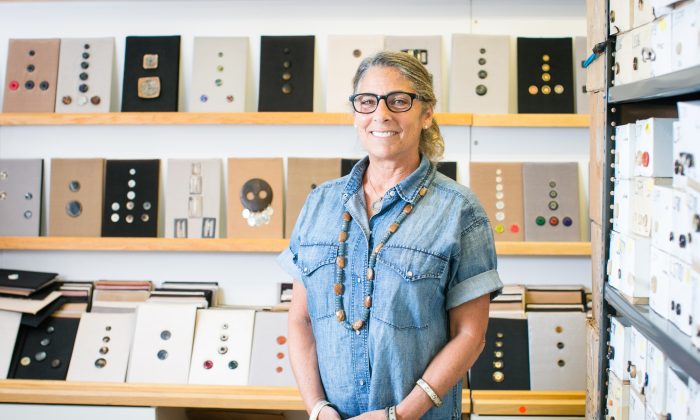 Joan Goodman, owner of Pono jewelry, at her showroom in the Garment District of New York on July 6, 2016. (Benjamin Chasteen/Epoch Times)
Fashion

The Colors and Textures of PONO by Joan Goodman

Whether it be actress Hillary Swank, sportswoman Venessa Williams, or actress Christine Baranski from the TV series “The Good Wife,” the women who wear PONO show the jewelry’s appeal is wide, and not for the demure. The source of the arresting jewelry is New York-based designer Joan Goodman.

Goodman seems to see more colors than the average person, she said in a recent interview in her Midtown studio, adding that this can be frustrating for those around her when she tries to get her ideas across. But if there is frustration, it is still a kind of endearing exchange, given that Goodman is a gentle soul in the fullest sense of the expression.

Her sense of color, experimentation, and search for new textures is evident in her wondrous creations.

Goodman uses plexi glass, real metal plating on resin, colored metal mesh, and various types of acrylics to achieve a variety of unusual effects. The sea is never far from her mind, and the time she spent in Hawaii before starting the brand is still remembered with longing. Near the sea is where she finds happiness and tranquility, and many of her pieces evoke the subtle luster of mother-of-pearl.

Transparency is also something Goodman loves to explore and re-work in every collection. She points to a resin necklace with a mirror backing that imparts an unusual luminosity and translucence without direct reference to anything in particular, yet is reminiscent of many things found in nature.

This reference to natural elements is also why many pieces are so wearable and likable, and probably why the colors and textures she keeps developing have such great affinity with the hues of our skin. At the same time, there is a boldness that is modern, sculptural, and edgy.

“A lot of the pieces and materials give light,” she said. Goodman explained how sometimes when customers pick out one of her pieces, it’s when they put it on and see it against their skin that there’s an aha! moment. It’s the moment when that special synergy happens—what she enjoys most.

There’s a vintage feel to almost everything. But Goodman says inspiration can come to her from anywhere, be it from somebody’s boots seen on the street, or her visits to The Met museum.

“I’m not sure where the big-ness [of the pieces] comes from—it’s not from me. This is what I wear,” she said pointing to the small pearl studs she has worn since junior high. “But I really like doing it.”

From Buttons to Jewelry

Since the inception of the PONO brand, Goodman has worked with a factory in northern Italy where artisanal manufacturing techniques meet an understanding of high-fashion quality.

That working relationship began when she and her sister Barbara Barnett took over the family business started by her stepfather 40 years ago. The business, called Bobbi Trim Ltd., sold mostly mother-of-pearl buttons.

One day, a man from the Netherlands knocked on the door. He was a representative for a group of European button factories who showed her some samples. The meeting led Goodman to start producing buttons for the fashion industry. It was an exciting time; she recalls meeting with many fashion designers who sought out her buttons.

The progression from buttons to jewelry arose out of dire circumstances, though PONO fans and collectors would argue that it was all for the best.

Goodman explained that today, there is no longer a demand for all the varieties of buttons that fill the PONO warehouse. Among the buttons of every size, shape, and color were also exquisite samples of sinuous hand-sculpted buckles and Art Deco pieces.

The current situation facing suppliers for the fashion industry is bleak and reflect greater shifts in fashion manufacturing. It is not because buttons are not being used by fashion designers, but because “everything’s gone to China,” she said.

“We used to work with Gap and Ann Taylor, and bigger companies that used a lot of European buttons. They really cared about the quality and the aesthetic,” she said.

After a while, companies started haggling over one cent differences. If fashion brands had the choice of sourcing buttons made in China or India for three cents apiece and buttons that were made in the United States or Italy for four cents, they would go for the cheaper option.

“And I thought, this is not my life, I’m not fighting over a penny with anybody, ever,” said Goodman. “Nobody cared anymore about about how it was made, and where it was made. So I decided to do something else.”

After the financial crisis hit, she and her sister opted to work without pay for two years in order to avoid letting go of long-time employees, thinking that the situation would get better. It never got better.

A New Yorker through and through—even her grandparents were born in New York—Goodman feels lucky to have been brought up by “ethical, lovely people.” She has a gentle voice and a smile that rarely disappears from her face, no matter how sad the facts are that she recounts.

Surrounded by a small but dedicated team of people, she has weathered the ups and downs of owning a business by looking within. She lives by the Tao Te Ching, Ayurvedic medicine, and yoga meditation. “I work on constantly letting go,” said Goodman, alluding to her spiritual ethos.

Fortunately, none of the problems of running a business are an impediment to her imagination, which seems to be overflowing with new ideas.

We caught up with her amidst preparations for her trip to Italy, where she goes four times a year to develop future collections. It is an intense time. During the space of one week, she will have worked out the spring/summer 2017 collection, and have started thinking about next year’s fall collection as well.

A couple of shelves near her desk hold samples from seasons past. It is nearly impossible to refrain from touching them and holding them up to the light to admire the unusual and captivating play of colors that she enjoys creating.

For Goodman, it is a matter of finding the right combination of materials, technology, and color to contain and convey her unique artistic vision.