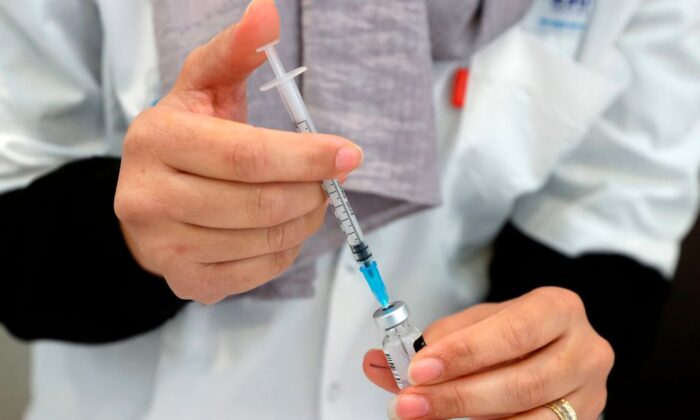 A healthcare worker prepares a dose of COVID-19 vaccine at Maccabi Health Services in the Israeli coastal city of Herzliya, north of Tel Aviv, on Dec. 21, 2020. (Jack Guez/AFP via Getty Images)
Viewpoints

Vaccine myocarditis—deemed a vastly exaggerated risk used to promote anti-vaccine hysteria—has been demonstrated in a multitude of studies to be an alarming population-level risk in men under the age of 40. The rates of vaccine myocardial injury in young men are consistent in peer-reviewed studies across the world (Canada, Hong Kong, Norway, etc.).

A new study published in the Nature journal Scientific Reports adds to the body of vaccine myocarditis research, this time showing a possible association between mass vaccination and increased emergency cardiovascular events.

The study specifically uses cardiac arrests because undetected myocarditis is a leading cause, including in cases of cardiac arrest-induced sudden death. Acute coronary syndrome is also measured because it’s often erroneously diagnosed in those who have myocarditis.

Here’s what the study finds:

As first doses of the vaccine were administered, cardiac arrest EMS calls rose precipitously. When second doses of the vaccine peaked around March 7, cardiac arrest calls were also at their highest. As the researchers state, they have identified a robust correlation between emergency calls and the rates of administered first and second vaccine doses in the 16 to 39-year-old population.

For both cardiac arrest and acute coronary syndrome EMS calls, the study finds a more than 25 percent rise during the interval January–May 2021 (when vaccines were rolled out), compared with the years 2019–2020.

Interestingly, while both vaccine administration and cardiac arrest calls congruently fell in March, EMS calls begin to surge again in mid-April (with no corresponding association with vaccination).

“[I]t is essential to raise awareness among patients and clinicians with respect to related symptoms (e.g., chest discomfort and shortness of breath) following vaccination or COVID-19 infection to ensure that potential harm is minimized,” the authors wrote.

“Against his will, he got his first dose of the Pfizer vaccine (which has significantly lower rates of myocarditis) on Oct. 29. That night he experienced intense heart palpitations, but they entirely subsided by the next day. He didn’t think of linking it to the vaccine.

“Thirty days later Desh got his second dose with no immediate side effects.

“Then on the night of Dec. 11, he came within an hour or so of dying from heart failure.”

The public health authorities have done an abysmal job of warning the public of cardiac side effects—perhaps because doing so would discourage many young people from getting vaccinated. The government has been massively influenced by Big Pharma and self-selected “top epidemiologists” who strangely hold the same views surrounding COVID-19 policy.

Except, both of the examples they use of social media users making this claim didn’t make that claim. Their prime example, Rep. Thomas Massie, correctly quotes the study from an article on justthenews.com:

“COVID-19 vaccination was significantly associated with a 25% jump in emergency medical services for heart problems in 16-39 year-olds in Israel, whose vaccination rate is among the world’s highest, according to a peer-reviewed study by MIT researchers.”

Needless to say, the study in itself doesn’t “prove” mRNA vaccines cause a surge in emergency cardiovascular events. The authors don’t claim otherwise. However, given the volume of existing data surrounding vaccine myocarditis in light of this new study, it’s possible there’s a causal relationship between mass vaccination and cardiac arrests.

After first falsely asserting social media users are claiming causation, Reuters outrageously claimed the study doesn’t even show correlation: “The study itself does not prove a correlation with COVID-19 vaccines, though social media posts suggest that it does.”

Here’s a direct quote from the study which apparently Reuters didn’t have time to read:

“Using Negative Binomial regression models, the weekly emergency call counts were significantly associated with the rates of 1st and 2nd vaccine doses administered to this age group but were not with COVID-19 infection rates.” [emphasis added]

“The overall risks of COVID-19 infection far outweigh the risks associated with developing myocarditis after a COVID-19 vaccination, even for young men, experts say.”

What’s worst, big tech and social media platforms are doing Big Pharma and the government’s dirty work in marginalizing and censoring content that may discourage some people from getting vaccinated.

Dr. Tracy Beth Hoeg—an esteemed epidemiologist who has testified in Congress on COVID-19 policy—has been repeatedly maligned and attacked for raising awareness on the dangers of vaccinating the young, specifically young men, on a population level. In June of last year, Twitter labeled her tweet “misleading” for the crime of correctly stating that post-vaccine myocarditis rates were above baseline.

Last month, Twitter cracked down on Hoeg in an even more egregious manner. This time, not for tweeting misinformation herself, but for critiquing Twitter for censoring a trained bioethicist’s tweet of the Israeli EMS call study. Her tweet was also labeled “misleading.”

The original tweet Hoeg was commenting on from Euzebiusz Jamrozik, a bioethics Ph.D. and postdoctoral fellow at the University of Oxford, didn’t opine about the miscalculated vaccine distribution in young males or broader dangers of mass vaccination. It simply stated the results of the Israeli study showing “mRNA vaccines in young people (age 16-39) are associated with cardiac arrests” with a link and screenshot.

Given all the controversy surrounding the study, on May 5 the journal’s editor made a note:

“Readers are alerted that the conclusions of this article are subject to criticisms that are being considered by the Editors. A further editorial response will follow once all parties have been given an opportunity to respond in full.”

The first population-level national study showing a correlation between mRNA vaccination and emergency cardiovascular events proved to be highly damaging not just to the reputations of the researchers, but to those who posted it on social media and critiqued Twitter for its egregious censorship.

Big Pharma, the academy, social media, and mainstream media in collusion are sending signals loud and clear: you must not critique or discourage vaccination in any way, even by quoting a peer-reviewed scientific study. Undoubtedly, such incentives prevent future research surrounding the risks of mRNA vaccination and force critical-thinking scientists from speaking out.