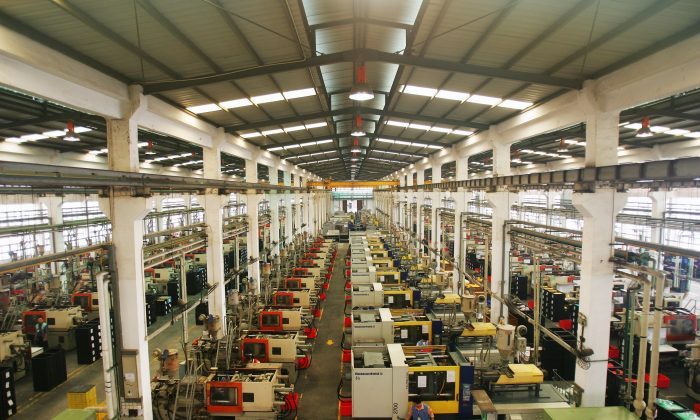 Dongguan, located on the eastern shore of the Pearl River in Guangdong Province, has proudly been referred to in China as one of the “Four Guangdong Tigers.” Often known as “the world’s factory,” this manufacturing city boasted a per capita GDP that once reached the level of a moderately developed country. But recently it is being described as “fading,” “declining,” and “in crisis.”

Local to Dongguan are 17 companies listed on China’s share market, ranging from machinery, electronics, metal, rubber, and plastics to textile and garment manufacturing.

Now, a sense of doom pervades the once prosperous industrial area.

Once, when I was looking at one of the signs, a security guard kindly pointed out to me that the information was already one year old. “The factory does not hire people now. Although they are still operating, business is a lot worse this year. This is the case for all factories in this area,” the guard told me.

Similar to the situation experienced in the industrial zone, the performance of all five electronics companies also declined in H1 of 2015.

Market and environmental factors are common reasons for the decline of these five companies.

According to Yuan Mingren, a consultant with the Dongguan Taiwanese Association, stricter manufacturing and environmental regulations have resulted in cost increases. Hence it is difficult for businesses to battle through challenges brought about by the weak economic situation.

Gong Jiayong, Deputy Director of Guangdong Strategic Emerging Industry Research Center at China Electronic Information Industry Development Institute, told reporters that it is high time for the manufacturing industry in Dongguan to “upgrade.” But time is running out to develop a new industry model.

Gong said the current economic situation exposes companies’ problems that had stayed hidden during the past rapid development. Factories in Dongguan were run like small workshops, relying on cheap labor, bonuses, and lax environmental regulation. The changing economic conditions, however, have brought about a wave of closures.

The 2008 shutdown of Smart Union Toy Factory, the largest toy factory in Dongguan, created an economic crisis in the area that lasted several years. In addition, according to a survey, in 2011 about 1,800 of Dongguan’s more than 3,500 toy factories have closed down. Businesses representing toy factories, that relied on foreign orders, also closed down on a large scale. This was the first wave of closures in Dongguan. Right now, only hundreds of toy factories are still operating.

In H1 of 2015, Taiwan enterprises Masstop and High Power OPTO closed their factories in Dongguan. So did Nokia. Dongguan Puguang, Samsung’s subcontractor who employed tens of thousands of workers, discontinued manufacturing. Chairman of the board of Dongguan Shengxin Food Co. became unreachable. The boss of Dongguan Merde Plastic Co. Ltd. absconded.

In July 2015, a civil court seal and case decision was posted on the gate of Dongguan Soyea Toy Co. Ltd., confirming that executives of this South Korean business had disappeared.

How long will this go on? The general manager of a local plush toys company founded in 2003 admitted that the toy business was not as good as in the past and that it was common for small-scale factories to close down. Low-end pirate toy factories in Dongguan have almost all disappeared.

In 2014, it was said that over 4,000 enterprises in Dongguan had closed. This figure was not officially confirmed. According to Yuan Baocheng, the mayor of Dongguan, only 428 businesses closed down in Dongguan during 2014. More businesses may have closed but may not have registered their closure with the Department of Industry and Business.

Gong Jiayong, with Guangdong Strategic Emerging Industry Research Center, said this round of shutdowns resulted more from industrial factors. Namely, the industrial basis for traditional subcontractor factories is no longer present. “Enterprises with little improvement in their management practices and without their own brand and core technology are quitting the market. Their era is gone,” Gong said.

Yuan Mingren, the consultant with Dongguan Taiwanese Association, emphasized another point. Dongguan is not alone, he said. The manufacturing sector across China is facing almost the same situation. Ningbo, Changzhou, Wuxi, Kunshan, Suzhou, and Tianjin are areas that have factories with foreign and domestic customers, and their production has declined 40 percent or more.

Chen Zhilong, a principal researcher at China Regional Research Center of Nanjing University of Finance and Economics, wrote an article earlier stating that, along with the disappearance of the demographic dividend (meaning plentiful young workers) and the overall increase in key expenses, the crisis and challenge facing the Chinese manufacturing industry cannot be eliminated. If not handled correctly, China’s manufacturing industry may “become hollow,” in other words, die.

Earlier in 2015, the Dongguan municipal government came up with their next ten year plan to enhance manufacturing in the city by the year 2025.

But this policy will take a long time to have any effect on small and medium-sized enterprises. Presently, most of those impacted by the downturn are still only concerned with short-term benefits and have not yet awakened.

This is an abridged translation of an article first published on Oct. 20, 2015 on JMedia, a publishing platform for independent writers. Lü Yin is a well-known writer and commentator.