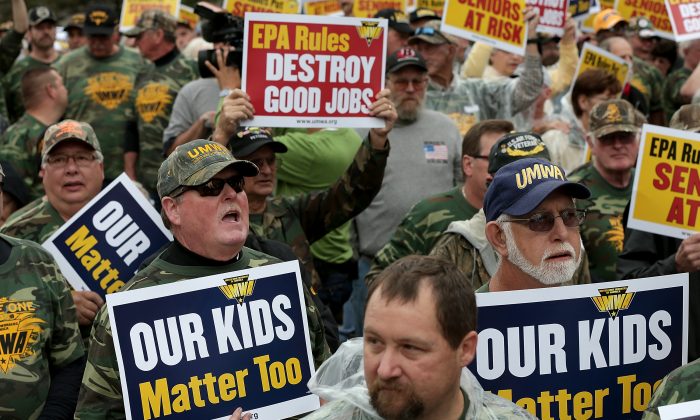 Members of the United Mine Workers of America rally outside of the headquarters of the Environmental Protection Agency in Washington, D.C., on Oct. 7, 2014. The rally was held to protest regulations proposed by the Environmental Protection Agency (EPA) that could impact the nation's coal industry and coal-related jobs. (Win McNamee/Getty Images)
Climate Change

A useful idiot is someone who supports one side of a philosophical debate while unaware of the overarching agenda driving the ideology they promote.

The term was used during the Cold War to describe communist sympathizers in the West. They were accused of viewing themselves as standing for benign socialism and allies of the Soviet Union, when they were actually scorned by the Soviets who used them as tools to help weaken democratic nations.

Climate activists undoubtedly regard many industry leaders as useful idiots on the climate front. Although seriously threatened by the global warming movement, most energy and manufacturing organizations try to appease campaigners by using biased and misleading language that unwittingly supports climate alarmism, destroys jobs, and impairs the well-being of millions.

Here are some examples.

The U.S. Chamber of Commerce, the world’s largest business federation, sensibly opposes the Obama administration’s Clean Power Plan (CPP). Yet the Chamber inadvertently promotes it on its website, asserting, “We support efforts to reduce greenhouse gas [GHG] emissions through a comprehensive legislative solution that does not harm the economy, recogniz[ing] that the problem is international in scope…”

So why would it advocate “a comprehensive legislative solution” to GHG emissions? The CPP will have no discernible impact on climate and yet, according to Chamber President and CEO Thomas J. Donohue, will “impose tens of billions in annual compliance costs, and reduce our nation’s global competitiveness.” That means any carbon dioxide (CO2) reduction plan that might have significant climatic impact would almost certainly destroy the U.S. economy. A “solution that does not harm the economy” undoubtedly does not exist.

The Chamber’s contention that the “the problem is international in scope” is true only if climate change is being driven by humanity’s GHG emissions. If it isn’t—and the Chamber should do nothing to promote the idea that it is—then climate change is obviously a regional problem, and each region should adapt to whatever is happening in their area, independent of global trends.

Similarly, the 35,000-member United Mine Workers of America (UMWA) officially opposes the CPP but unintentionally supports it in the points they suggest mine workers bring up in their own letters to newspapers and government representatives. For example, the union suggests workers write, “No one can deny that greenhouse gas emissions represent a problem that needs to be addressed.”

The reports of the Nongovernmental International Panel on Climate Change demonstrate that thousands of climate experts dispute the idea that CO2 emissions are a serious problem. UMWA executives are not qualified to judge these scientists wrong, and it clearly sabotages their members’ interests to do so.

Duke Energy, the largest electric power company in the United States, says on its website that it is “committed to finding new ways to confront one of our industry’s biggest challenges—global climate change.” While regulations to restrict CO2 emissions present serious challenges to the industry, trends in an imaginary “global” climate have no impact on the sector.

Does Bioenergy Have a Green Energy Future in the US?

Yet Lynn Good, Duke’s President and CEO, promised to work with state officials to keep moving toward “a lower carbon future” and said in her April 15 open letter to stakeholders that the company is “advocating for climate change policies that reduce emissions.”

While all corporations must follow applicable government regulations, they are under no obligation to encourage them. Considering that a significant fraction of the power Duke generates comes from natural gas and coal, both significant CO2 sources, it makes no sense for the company to urge tighter CO2 controls. While coal is the primary target of the EPA right now, gas will undoubtedly come under increasing attack as the new rules eliminate coal power.

Arch Coal, one of the world’s largest coal producers and marketers, also has clear reasons to fear the consequences of the global warming scare. Yet in its August 3 press release Senior Vice President of Strategy and Public Policy Deck Slone said, “To truly address the threat of climate change, these [developing] countries will need low-cost, low-carbon mitigation tools for fossil fuels.” Talk about shooting yourself in the foot.

While these groups have obviously decided that it is not in their interests to contest the official excuse for the CPP—the supposed threat of CO2 emissions—it is a serious strategic mistake for them to promote it. Effective leaders know that you can never satisfy those whose ultimate agenda includes eliminating you.

Industry must stop acting as useful idiots who feed the fires burning down their homes.