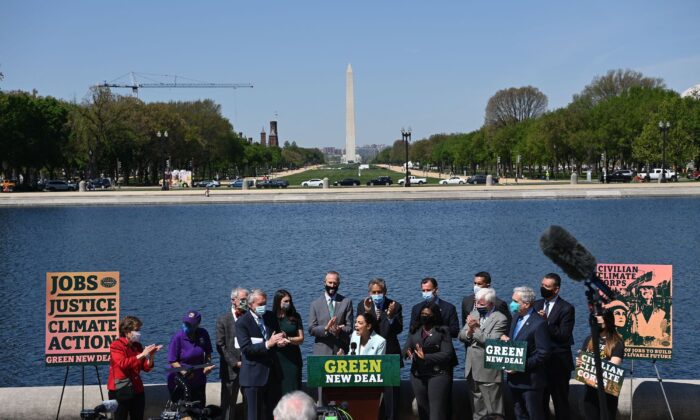 Rep. Alexandria Ocasio-Cortez (D-N.Y.), next to Sen. Ed Markey (D-Mass.), speaks during a press conference to re-introduce the Green New Deal in front of the Capitol in Washington on April 20, 2021. (Mandel Ngan/AFP via Getty Images)
Viewpoints

The Climate Army Is Coming

The climate army is coming.

Dissatisfied with the American people’s lack of concern for their issue du jour, self-righteous coastal elites are moving on from slick public relations campaigns and headline-grabbing protests to deploy a legion of climate activists across the nation—paid for by your tax dollars, whether you like it or not.

President Joe Biden’s proposed Civilian Climate Corps (CCC) would be the biggest mobilization of government labor since the New Deal, a massive and likely permanent expansion of government power cementing the radical climate agenda in our halls of government. It would also burden taxpayers with massive debt—without any impact whatsoever on the global climate.

Though the CCC is said to support such innocuous projects as solar panels and parks, it’s really a slush fund for progressive activism paid for by your tax dollars.

The CCC’s governing structure would allow unelected bureaucrats to funnel taxpayer money wherever they want to with almost no oversight. In fact, it explicitly endorses racially oriented decision-making, requiring at least half of projects to entail “environmental justice”—the murky idea that climate change is the culprit for all manner of racial disparities. This is the opposite of both equity and transparency, two goals the Biden administration claims to aspire to.

The CCC also plans (pdf) to extend taxpayer dollars to “providing education on climate change,” which is code for funding political activist groups such as Greenpeace, the Sunrise Movement, and Movement for Black Lives. These organizations aren’t about the environment so much as providing an advertising arm for the climate doomsday narrative and progressive political agenda.

The CCC’s few potentially beneficial projects are better suited for private industry and charity than a bloated federal behemoth—and its overtly partisan provisions foretell a sinister future for our nation.

While the national economy is still struggling to recover from the COVID-19 lockdowns, with businesses large and small starving for talent, the federal government is preparing to pull 1.5 million workers out of the economy. Instead of embracing the power of the free market, the Biden administration seems set on destroying it.

What’s worse is that the CCC encourages hiring illegal immigrants and will give jobs, benefits, and even tuition reimbursements to people whose first act in the United States was flouting the law to cross the border illegally. A report by the American Accountability Foundation found taxpayers could expect to pay nearly $9 billion to provide illegal immigrants with jobs and benefits through the CCC. The Biden administration’s disastrous response to the border crisis will be significantly worsened by extending another carrot—taxpayer-funded, all-but-permanent jobs—to illegal immigrants instead of prioritizing law-abiding American citizens.

Of course, the CCC will also be required to use union labor—yet another arbitrary and costly provision that will make this progressive dream even more inefficient and even less helpful to the country.

Biden’s supporters might respond that all this is necessary to stave off the climate catastrophe. Surely we have to do something! But climate science—the real data lurking behind apocalyptic headlines and shrill sound bites—doesn’t support Biden’s argument.

There has been no documented increase in climate-related disasters of any kind. In fact, wildfires and floods have actually declined in recent decades. And here’s even better news: Climate-related deaths have fallen by around 98 percent even though the global population has quadrupled in the past century. Humanity in all parts of the world is becoming more resilient to our natural environment, even while activists cry that the end is near.

Even if all this weren’t so and action really was necessary, even the most radical climate rules would make no meaningful difference. Eliminating fossil fuel consumption nationwide—despite being unimaginably expensive while dismantling our economy and putting lives in jeopardy—would reduce global temperatures at the end of the century by less than two-tenths of a degree.

The CCC, like the Green New Deal and other socialist ideas before it, isn’t really about climate change. It’s not about protecting the American future or even about the environment. It’s about pushing America one step closer to socialism and a progressive dystopia where everyone works for the government, there is no free market, and only politically correct opinions are allowed.

It’s no wonder the American people don’t trust the government to spend their money wisely on climate change. Instead, they trust each other. They know that entrepreneurs and innovators willing to do what Americans have always done—roll up their sleeves and try new ideas—have a far better chance of success than inefficient government programs.

That’s how the real issues of our time will be solved, from climate adaptability to more pressing concerns like fighting poverty and delivering modern health care to the developing world.