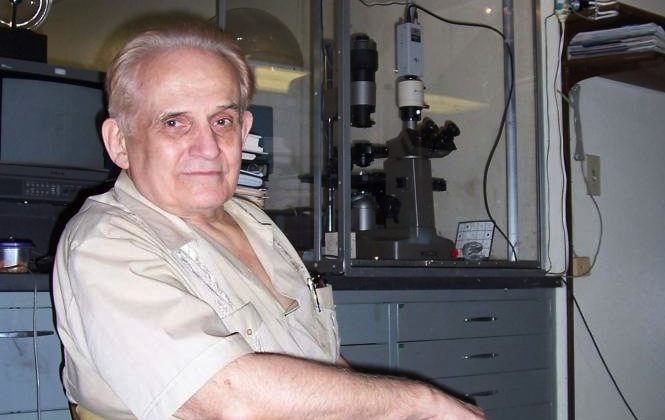 Cleve Backster in his San Diego lab in this file photo, where he investigates primary perception. (Courtesy of Cleve Backster)
Beyond Science

Primary Perception: Look Into ‘The Secret Life of Plants’ (Part 2 of 2)

Cleve Backster published a book called “Primary Perception: Biocommunication with Plants, Living Foods, and Human Cells” in 2003, the first comprehensive account of his work that he authored himself. In it he details all the different things he monitored—up the line from plants, bacteria, and eggs to animal cells such as blood from beefsteak, to human cells.

“There are so many implications here, it sort of amazes me that people don’t get fired up in the scientific community,” he says while laughing.

He has faced decades of cold responses from the academic community, despite presenting his evidence at many conferences and various scientists around the world having replicated his results. His spirits have not let up—he is a man convinced that he has found something important, and won’t let the well-known frailty of human beings’ ability to accept new ideas put him down.

“And also everything I said in the book is true,” he says with a chuckle. “I was very careful about that, that anything in that book is established on fact. I didn’t want people to find a little technicality that wasn’t accurate and then say, well, the rest of your work isn’t accurate.”

He has also followed the same approach when it comes to the reasons why this phenomenon exists. By not engaging in theorizing that might be shown to be incorrect, he has hoped to avoid scenarios where people throw out his data with his speculations.

Though Backster doesn’t publish speculation concerning an explanation for primary perception, one of the more promising leads for understanding primary perception in terms of existing theories has to do with a phenomenon in quantum physics known as nonlocality.

Nonlocality is something predicted by quantum physics that Einstein called “spooky action at a distance”—the idea that particles may somehow be connected with each other across space.

It has been shown in experiments that when a pair of photons (packets of light) is emitted from an excited atom, when experimenters change the polarity of one photon (by passing it through a sort of filter), the polarity of the other is also affected, and the change takes place in less time than it would take for light to travel from one particle to the other.

When photons show this relationship, they are said to be entangled. So one might wonder, how far does nonlocality go? Is it only for small particles, or could larger systems possibly be entangled, too? And if life forms might be entangled with each other, what would it look like?

If nonlocality does extend to the level of life and mind, then what has been called primary perception may be evidence of exactly this: Backster’s findings show a signal that appears not to be affected by distance or intervening material that would block electromagnetic waves.

Though there was great popular interest in Backster’s results in the 1970s, the scientific community has still not warmed to the idea. One ostensible reason was a failed attempt to replicate Backster’s first published experiment by another group of scientists, which was then published in the prominent journal Science in 1975.

But according to Backster in his book, the scientists (and others who have tried but failed) did not observe all the proper scientific controls.

One particularly important control that Backster discovered was necessary was that one cannot look at the output from the plant (or whatever else one might be monitoring) while it is occurring—observing it in progress blocks the responses.

With an unusual phenomenon such as primary perception, not observing all the controls that the original investigator found were required to elicit the effect amounts to sloppy science.

However, the possibility that looking at the output would affect the results does not make sense within the modern paradigms of science, so those carrying out the replications likely did not think such controls would make any difference.

It has been said that plant biologists tend to be a particularly conservative lot, and some prominent scientists at the time rejected the possibility that plants could exhibit any sort of electrical activity, much less have any perceptual capabilities.

“When you are talking with those individuals [the skeptics], the implications are profound and it really puts them to the test whether they want to be a true scientist and explore it or whether they sort of want to stay away from it,” Backster says.

“You don’t have that problem [resolute skepticism] with someone who isn’t in a position of having to defend the body of scientific knowledge,” Backster says.

Today, however, the presence of electrical activity in plants is increasingly accepted. Scientists in the field of plant neurobiology have found that plants exhibit signals that look much like neuronal activity in animals. However, these are not the same signals that Backster has investigated.

Though Backster does not have a Ph.D., his attitude and investigations have shown him to be much more in the spirit of true science than those who have rejected his work out of hand.

The findings have been replicated by others, including Russian scientist Alexander Dubrov and Marcel Vogel, who was at IBM at the time of his studies, as reported in “The Secret Life of Plants.” The author of this article also completed his undergraduate honor’s thesis on the topic, showing significant results pointing toward plant sensitivity to human interaction.

Getting Others to Investigate

All along, Backster has been open to helping people investigate on their own. And as long as the controls are observed, these signals do come through—this author has observed them firsthand, in Backster’s lab in San Diego and in his own investigations, as well as in videos of experiments done by Backster.

“For people who want to get involved or become acquainted with the possibility of this phenomenon existing—they’ve got to keep it spontaneous,” he explains.

Backster recommends recording what is happening in the room with one camera, and with another camera, capturing the output from the measuring device.

“Then afterward, play that back, and they’re going to be amazed at seeing the synchronicity of things that do occur—as long as you keep it spontaneous.”

After he described primary perception, Backster hoped that people’s curiosity would lead them to honestly investigate it.

“This should be a good strong clue that something is there; it’s up to them then to structure some kind of a repeatable experiment,” he says.

“There’s a big conflict again between spontaneity and repeatability,” he explains.

Most of science confirms the existence of a new phenomenon by trying to repeatedly elicit it under the same conditions many times. But things relating to consciousness and mental phenomena may not fit that approach. For example, just because someone doesn’t laugh at a joke the fourth time they’ve heard it doesn’t mean the joke isn’t funny. It is just that the phenomenon does not lend itself to that particular kind of repeatability.

“So somehow or another they need to get around that, but not use that as an excuse as something that can’t be proven,” he says.

Right now, Backster is looking for someone else to carry the torch of primary perception research, or at least to help him in further investigations.

“My point now is I’ve supported a research facility here for about 27 years,” he says, “but it’s at a point of not being able to do everything myself.”

“I’ve got to try to get enough funding to have at least one staff member that can help out, because to have to try to think of these things and figure out ways to finance them,” he laughs, “and conduct the research and through all the aftermath afterward, just gets too much for one person.”

After 40 years without much concrete support for his research efforts, Backster says that “sometimes you get the feeling that a lot of the more established scientific groups just hope that you’ll run out of steam, just wear yourself down, and run out of money or something and go away. But I’m not prone to do that,” he says, laughing.

“I don’t want to go away. I’m just offended at the idea that something so obvious and so easily observed as this is, could be, if it is, deliberately overlooked by people who claim to be scientists—that just doesn’t fit the definition of what a scientist is.”

Backster started the Backster Research Foundation Inc. in 1965 as a nonprofit research foundation to help fund his work. It is in good standing, and donations are tax-deductible. But funding has not been overly forthcoming over the decades.

“It’s a very competitive thing, as far as money is concerned,” he explains. “I’ve lectured before a lot of scientific groups; [the importance of this] should be so apparent that people would at least ask you if you need some help!” he says.

“I guess I’m starting to think that that’s pretty naïve, because if you don’t ask for money yourself, you’re not going to get it,” he says. Backster and his publisher have looked into getting grants, but it can be difficult without connections to an academic institution.

Backster has also hoped that he could help make available an inexpensive, hand-held device that could magnify these signals so that more people can do their own investigations. He especially hopes that students and young people might be able to get their hands on one.

“I think a lot of things would be uncovered that they would find amazing,” he says.

“All living things are putting out these very subtle signals, they’re microvolt signals. And by amplifying these, then comparing them, the tracing, let’s say, or recording on your computer these signals and what is going on in the environment, I think that people should find it very, very interesting.

“It’s very surprising there’d be an endless number of things of cause and effect to the situation; where you see huge reactions and when you can see what really caused it, you’ll be amazed.”

The Backster Research Foundation can be reached at www.primaryperception.com

Cleve Backster passed away on July 1, 2013. These articles are being republished as a way of remembering his life and work.