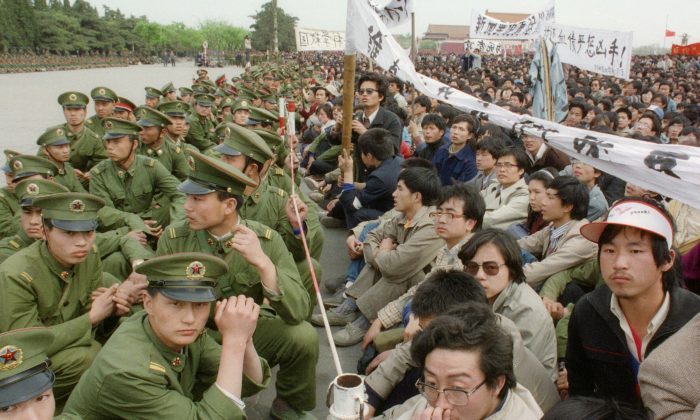 Several hundred of 200,000 pro-democracy student protesters face to face with policemen outside the Great Hall of the People in Tiananmen Square in Beijing on April 22, 1989. (Catherine Henriette/AFP/Getty Images)
The Dead End of Communism

The Clash of ‘Party Character’ and Human Nature at Tiananmen

Twenty-eight years ago, China—along with the Soviet bloc—seemed to be on the cusp of political change.

Beginning with college students and university staff around the country, millions of people joined the nationwide demonstrations—for human rights, an end to corruption, and democratic reform—that had been sparked off by the death of Hu Yaobang, the liberal former leader of the Chinese Communist Party, in April 1989.

Despite widespread sympathy for the movement among citizens, and nearly a decade of economic change and social openness, the Party declared martial law in Beijing. On June 4, 1989, soldiers and tanks of the People’s Liberation Army entered the capital and killed hundreds, maybe thousands, of unarmed protesters in Tiananmen Square—the “gate of heavenly peace.”

In the final days before the imposition of martial law, Zhao Ziyang, Hu’s successor to the Party leadership, spoke to the students in Beijing: “We came too late. We are sorry. You talk about us, criticize us. It is all necessary.”

Twenty days after the Tiananmen Massacre, Zhao was forced out of office and placed under house arrest. According to “The Tiananmen Papers,” a scholarly reconstruction of the events that took place during the demonstrations and massacre, while Zhao was never formally accused of any crime, he was blamed by Party hardliners for supposedly engineering the pro-democratic demonstrations.

In Zhao’s place, the remaining Party leaders installed Jiang Zemin, a man whose deleterious influence in Chinese politics and brutal legacy in the suppression of human rights lingers to this day.

The Paradox of Reform

Following the death of Party chairman Mao Zedong in 1976, China had begun its “reform and opening up” era, unleashing the entrepreneurial potential of hundreds of millions of Chinese. The crazed fanaticism, state terror, and starvation of the chairman’s rule appeared to be things of the past.

Marx, Lenin, and Mao seemed to take a backseat in the tide of market prosperity and budding political reform. The general secretary of the Chinese Communist Party, Hu Yaobang, took the opening and went so far as to say that none of Mao’s ideas were relevant to modern China’s economic modernizations.

And in 1987, the mantle of leadership passed to Zhao Ziyang, a disciple of Hu’s liberalizations. Though a high-ranking bureaucrat and a dedicated Party member, Zhao, in the words of scholar Julian B. Gewirtz, “prioritized substance over style” and envisioned a China both rich and democratic. In one of Zhao’s more radical proposals, he called for the independence of the government from the Communist Party.

Had Zhao’s leadership been allowed to continue, “it’s not at all hard to imagine that Chinese society would be much more pluralistic, democratic, law-abiding, fair, and open to the outside world,” said Gewirtz, in a statement published on the commentary website ChinaFile.

But the Party had its own logic, one that could be seen even before the death of Hu and the tragedy at Tiananmen.

Hardliners in the CCP, including Deng Xiaoping, the real source of power and political patronage in the China of the day, had previously acted—as in the example of the campaign to rid China of Western “spiritual pollution”—to curb political liberalization. Hu was a controversial figure, and the latter half of the 1980s saw his downfall.

The concept of “Party character”—”dang xing” in Mandarin—was a constant throughout CCP rule, and has proved a formidable tool for ensuring cohesion of the communist regime and for enlisting cooperation from its individual members.

Class struggle and materialist dialectics, the philosophical core of the Marxist-Leninism enshrined in CCP doctrine, informed the mass murders and unprecedented famine under Mao, and remained unchanged in the years following. Economic development, legal modernization, and loosening of social norms could make Chinese richer and more materially satisfied, but the Communist Party retained its basic ideological character.

At a time when political reforms in the Soviet Union led to the wholesale collapse of Eastern European communist regimes, the strength of Party character doomed Hu and Zhao even in their capacity as general secretary—the highest rank in the CCP.

Zhao Ziyang was not the first Party leader to be disgraced. In the chaos of the Cultural Revolution, brought on by Mao in the 1960s, General Secretary Liu Shaoqi was hounded by Red Guards as a “capitalist-roader” and brought down as his attempts to defend himself with the Chinese constitution were simply ignored. He was tortured and held in inhuman conditions until his death two years later.

Chen Duxiu, founder of the CCP, was opposed to the use of violence and favored cooperation with the republican Chinese government in power at the time. He was squeezed out of his position and eventually expelled from the Party as a “right-wing opportunist” in 1929.

Today, little remains of the social movement that swept through Beijing, Harbin, Shenyang, Guangzhou, Hefei, Chengdu, and other Chinese metropolises in the spring of 1989. Zhao Ziyang lived under house arrest until his death in 2005.

With Zhao’s successor Jiang Zemin, China continued its march into capitalism without democracy. The aims of reform—transparent government, rule of law, greater democratization and growth of civil society—reversed course as money and patronage became the caustic lubricants of an affluent China’s political economy.

While clad in Western suits and enjoying the fruits of crony capitalism, the Party organization under Jiang retained the machinery of communism from Tiananmen—and the ideological culture for its use. This time, the offense was not a matter of politics, but a clash of faith.

In 1999, Jiang Zemin ordered a comprehensive campaign to destroy Falun Gong, a Chinese spiritual practice taken up by over 70 million people from its first public teaching in 1992.

The Party, under Jiang Zemin, retained the machinery of communist repression seen at Tiananmen—and the ideological culture for its use.

And like the massacre in 1989, the persecution of Falun Gong was foreshadowed by signs of mounting CCP pressure—the slanderous articles by communist pundits like He Zuoxiu, the banning of Falun Gong books in 1996—culminating in the arrests in April 1999 of over 40 Falun Gong practitioners in Tianjin, northern China.

Falun Gong adherents protested, gathering before the CCP leadership compound at Zhongnanhai in Beijing. Premier Zhu Rongji received several representatives inside the building, but his actions, as those of Zhao Ziyang 10 years earlier, meant little.

Jiang Zemin, who had risen to power in the wake of the bloody resolution of events on June 4, saw a similar situation in the rise of Falun Gong in the 1990s. He called Falun Gong “the most serious political incident since June 4” in a Politburo meeting, according to scholars.

The 2000s and beyond would see the development of the most brutal persecution campaign in contemporary China—complete with dehumanizing propaganda, labor camp sentences, and the surgical murder of hundreds of thousands for their organs.