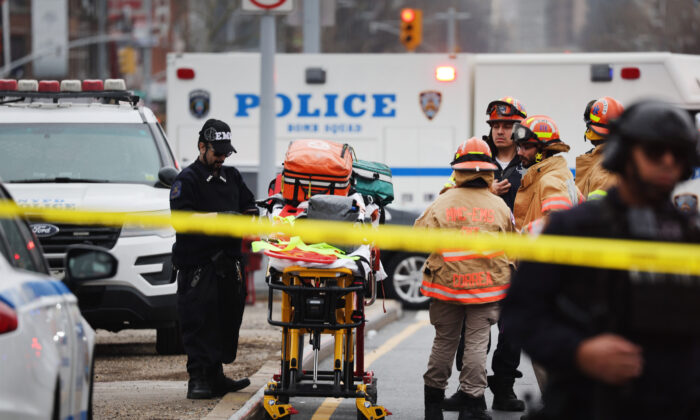 Police and emergency responders gather at the site of a reported shooting of multiple people outside of the 36 St subway station in the Brooklyn borough of New York on April 12, 2022. (Spencer Platt/Getty Images)
Viewpoints

The long and disturbing rap sheet of Frank James, the accused black nationalist New York subway shooter arrested on April 13 and charged by federal prosecutors with one count of committing a terrorist act against a mass transportation system, ought to serve as a national wake-up call.

The 24-hour-plus nerve-racking manhunt ended in anticlimactic fashion, with James apparently calling the New York Police Department to report his own location. But the Brooklyn shooting, which left 10 people with gunshot wounds and 19 others injured in the resulting fracas, stands as the bloodiest act of carnage in the history of the New York subway system.

It also should never have happened.

James’s rap sheet includes nine previous arrests in New York alone. Those Empire State arrests include such wide-ranging offenses as a criminal sex act, possession of burglary tools, and theft of service. His rap sheet also includes three additional arrests in neighboring New Jersey for the equally wide-ranging offenses of trespass, larceny, and disorderly conduct. Most damning, one of the Garden State arrests entailed a resultant charge for a terroristic threat. James, an avowed anti-white racist, had also frequently talked about violence and committing mass shootings on his personal YouTube page—even doing so as recently as April 11, the day before the shooting.

There is no world in which James should have been out on the street, living a normal life. That he appears to be heading for a jail cell for the rest of his miserable life is just, but long overdue: It comes at least 10 gunshot victims and 29 total victims too late. That he wasn’t already incarcerated is yet another data point evincing the woeful present state of the American criminal justice system. But our criminal justice system is not failing for the reasons “criminal justice reform” proponents from the left and the libertarian faux-Right claim it is failing.

America, in the year 2022, does not suffer from an over-incarceration problem. On the contrary, we suffer from an under-incarceration problem. The sooner we awake from this collective slumber and seize the moral high ground back from the Soros/Koch-funded forces of “anti-prosecution” local district attorneys, “bail reform,” the jailbreak of slashed sentences, and the broader civilizational suicide of the “criminal justice reform” movement, the safer and more secure we will be.

According to a 2018 special Department of Justice report that tracked updates on prisoner recidivism from 2005 to 2014, a shockingly high 83 percent of state prisoners released in 2005 across a sample size of 30 states were rearrested at least once over the course of the next nine years. In fact, 44 percent were rearrested in their first year post-release. Overall, the 401,288 state prisoners who were released from state prison and subsequently tracked by the Department of Justice study were rearrested an estimated 2 million times during their nine years post-release.

Perhaps even worse, the risk of recidivism is not merely high as a broad statistical proposition; the nature of the crimes committed by released prisoners also tends to be deeply troubling. Consider the much-ballyhooed “problem” of so-called low-level drug offenders who allegedly predominate (in actuality, drug offenders only constituted 14 percent of the total state prison population in 2018) the state prison system: 77 percent of released drug offenders were arrested for a non-drug crime within nine years, and 34 percent were arrested for a violent crime.

Our prisons may thus not be very effective at rehabilitating offenders, but they are extremely effective at preventing criminals from reoffending. It shouldn’t take a doctoral degree in criminology to figure that out.

It is true that the total population of incarcerated Americans is higher than any other similar incarcerated population across the world, but this oft-heard statement is facile. America also has much higher percentages of serious or violent crime than most other Western-style democracies, and that discrepancy has only widened since 2020’s “1619 riot” urban conflagrations and the subsequent spike in national violent crime rates.

Yet despite Americans’ overall more violent nature, the majority of serious crimes go unprosecuted. As Sen. Tom Cotton (R-Ark.), the preeminent pro-law-and-order elected official, put it in 2016: “Law enforcement is able to arrest or identify a likely perpetrator for only 19 percent of property crimes and 47 percent of violent crimes. If anything, we have an under-incarceration problem.”

Sadly, men like James are hardly an exception; they more often represent the overarching rule. Consider another high-profile recent data point: The two men, likely planted Iranian regime assets, who were recently arrested in Washington for pretending to be federal agents and buying off Secret Service officers, were unconscionably granted bail. It is a sordid episode that should nonetheless be a familiar one for New Yorkers who recently lived through the horrific experiment in New York’s “bail reform” law, which saw countless robbers and gangbangers capriciously let go—only to promptly reoffend.

For at least a decade, opportunistic “criminal justice reform” ideologues on both the progressive left and the libertarian “right” have pushed an inordinate amount of pro-jailbreak policies, affecting everything from “bail reform” to back-end sentencing reductions to hamstringing police tactics to reining in qualified immunity doctrine. The all-too-predictable result of this Soros/Koch-funded anarchic push has been more bloodshed and more violent crime. God-willing, the Frank James episode will serve as an impetus to reclaim our safety and security from the forces of civilizational suicide before those forces can do even more damage to tear our nation asunder.