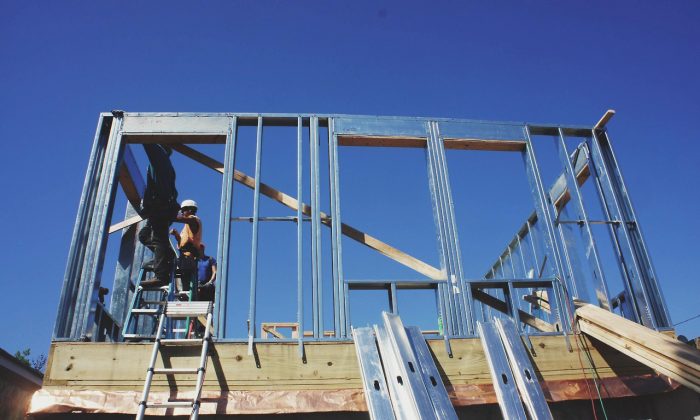 De Blasio announced that the city has approved the start of construction for 535 homes and sent 543 reimbursement checks out through the Build it Back program, exceeding the mayor’s goals that were set as part of his Sandy recovery plans made earlier this year.

De Blasio’s office has often invoked the former administration of Mayor Michael Bloomberg when asked to explain why it is taking so long for people to get back into their homes.

“Homeowners had been stalled in the intake process when the de Blasio administration came into office, with not a single one having started design or construction or received reimbursement,” read a press release from de Blasio’s office on Tuesday.

Registration for the program closed at the end of October, only two months before the new mayor took office. It wasn’t until February 24 that de Blasio held a major press conference on Build it Back, where he promised certain benchmarks would be reached.

“All levels of government have to do better,” he said at the time.

Roofers from Fountain Roofing, a North Atlanta-based company, repair a damaged roof on a home in the storm-damaged Belle Harbor section of the Queens borough of New York, on Dec. 5, 2012. Although City officials are poised to proclaim success in reaching their Build it Back program’s first milestone of 500 projects started and 500 reimbursement checks sent by Labor Day, an estimated 15,000 homes are still waiting for repairs or reimbursement checks. (AP Photo/Kathy Willens)

It wasn’t until March 29 that he appointed a team of leaders to a newly created Office of Recovery and Resiliency. Bill Goldstein, Amy Peterson, and Daniel Zarrilli were put in charge of shepherding $3.2 billion in federal resources to help city residents rebuild and repair their homes and make the city more resilient.

Peterson, who was put at the helm of the Mayor’s Office of Housing Recovery, has had her feet on the ground ever since, often getting personally involved in home rebuilds.

The announcement about the new team was made the day after a weeklong compliance inspection by the federal government. The inspection found the city was not complying with a number of factors, and was operating with a filing system so disorganized that the Housing and Urban Development inspectors could not locate key information.

The results of the compliance visit served to further delay Build it Back progress, including delaying damage assessments and reimbursement checks. The city says they are now back on track, but Congressman Michael Grimm, who represents Staten Island and part of Brooklyn, has been a harsh critic of what he says are little more than stalling tactics.

“Whatever the mayor does at this point is almost irrelevant,” said Grimm in Staten Island last week.

Repairs continue on a home damaged that was damaged in Superstorm Sandy, in the Staten Island borough of New York, on Aug. 26, 2014. New York City officials are confident that they will meet the Build it Back program’s initial goal of starting 500 construction projects and sending 500 reimbursement checks by Labor Day. (AP Photo/New York City Mayor’s Office of Housing Recovery Operations)

At the national level, Build it Back’s creator Brad Gair said in a rare interview with WNYC in July that every federal disaster program he’s overseen has had unhappy customers.

Gair, who left Build it Back in mid-2013 to be vice president of emergency management and enterprise resilience at NYU Langone Medical Center, has a long history of federal disaster recovery work. He has been involved in hurricane recovery programs in New Jersey, Louisiana, and Mississippi.

The results have often been dubious. In Louisiana, about 2,100 homeowners hit by Hurricanes Katrina and Rita recently found out that a contractor made $94 million in overpayments to them. The contractor, ICF International, wants the money back, according to The Times-Picayune.

For Gair, broken systems and broken promises are just part of the equation.

“Everybody’s mad,” said Gair in his WNYC interview. “Everybody’s dissatisfied, just like they are in every one of these disasters.”