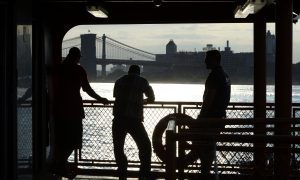 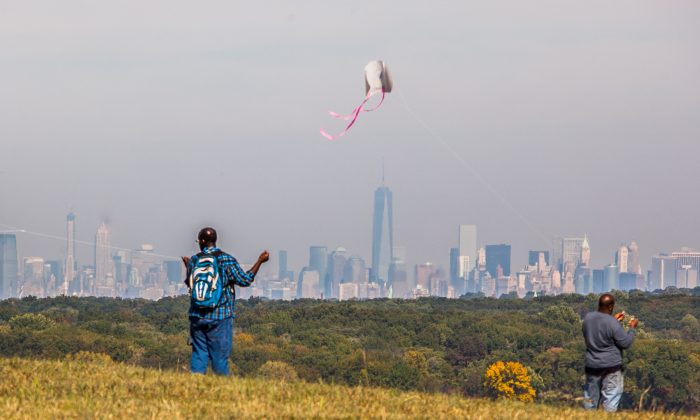 The City’s Other 9/11 Burial Ground Welcomed as Park

NEW YORK—There was a time when a big chunk of Staten Islanders’ quality of life was determined by the direction of the wind.

Anna Wishko would walk outside her house near the Staten Island Mall and a sudden breeze would bring an unusual scent. “What is that?”

“Lemon?” she would think to herself.

Yes. There was a time when the government would perfume Staten Island’s air with lemon fragrance in a hopeless battle against the offensive odor of one of the largest garbage dumps our world has seen—the Fresh Kills Landfill.

“Robert Moses opened this site as a temporary landfill for three or four years,” said Marty Bellew, retired director of the Sanitation Department’s Bureau of Waste Disposal, stopping to talk as he climbed to the former landfill’s northern summit on a recent warm Sunday afternoon.

But perhaps not even the revered mid-20th century urban master builder Robert Moses could have foreseen that 3 years would become 13 years, and then 30. By the 1980s, the 2,200 acres of formerly estuarial marshes had trash piled in mounds over a hundred feet high, and the heaps were growing by 26,000 tons each day. Most of the city’s residential and commercial trash ended up at Fresh Kills.

Around that time, Bronx native Marty Bellew couldn’t find a job with his freshly obtained chemical engineering degree. And so he took a position loading trucks for the Sanitation Department instead. The temporary job quickly turned into a career. In just a few years, by 1987, Bellew was already a supervisor.

Yet, according to Bellew, saving space at Fresh Kills was just an excuse Sexton used. “That’s the spin he put on it,” Bellew said. “It was to generate money for the city, but the guy didn’t realize he raised it so much [customers] were going elsewhere.”

With the recycled waste going through other vendors, Fresh Kills intake further dropped to some 12,000 tons a day. But even that was enough to make it at one time the largest landfill in the country.

Not Fit for Dwelling

In the early 1990s Kathy O’Leary Garbarino worked as a real estate broker in the area. “We couldn’t give away the homes,” she said.

Aside from being an eyesore, the dump exuded a horrendous smell, especially on hot humid days, Anna Wishko, who moved in during the 1980s, said. She would pack up every summer and escape to the countryside upstate to get some fresh air.

Also, as much as garbage repulses humans, it is very attractive to vermin. “You have all your garbage, you have your seagulls,” Wishko said.

Packs of feral dogs threatened Fresh Kills’s 600 employees, rats bred to magnitudes unmanageable by the use of poison. Hawks, falcons, and owls were brought in and successfully suppressed the vermin. But even the predators weren’t enough to drive off the seagulls.

Finally, in 1996, a state law was passed ordering the site closed by the end of 2001. Gradually, all the city waste was to be exported to neighboring states.

In March 2001 Fresh Kills Landfill was officially closed. The city started a design competition for turning the site into a huge park, one that when finished would be almost three times the size of the Central Park.

The landfill was already partially “capped,” that is sealed off with plastic or clay membranes and layers of soil. The rest was to be sealed off in the coming years.

But then Sept. 11 came. In a matter of hours a series of unprecedented terrorist attacks turned the financial center of the world into hundreds of thousands of tons of potentially hazardous rubble.

Bellew was at the downtown Manhattan office of Peter Montalbano, Sanitation Department deputy commissioner, when the attacks occurred. At 8:46 a.m. he heard a loud explosion. Out the window Bellew could see flames blazing out of the North Tower.

“Somebody else came in and told us that a plane just crashed into one of the trade centers and we kind of didn’t believe him,” he told the DSNY Oral History Project. “We were looking out the window and we saw the other plane go into the other trade center.”

A decision was made in real time. “We knew we’d be charged with removing the debris or at least helping or assisting,” Bellew said. “We worked toward opening the landfill right away.”

Fresh Kills was reopened for the sole purpose of depositing the 1.6 million tons of ground zero debris.

For the next year up to 1,000 workers painstakingly sifted through the rubble down to the size of a quarter of an inch, salvaging thousands of artifacts—and, painfully, thousands of human remains. The work was done by June 2002.

A year later the emotionally charged issue prompted Diane Horning, whose son died in the attacks, to found a nonprofit to fight for a resifting of the debris. Horning argued part of the rubble was not properly screened, and demanded that finer particles be removed from the landfill and moved to a more appropriate location as they likely contained cremated remains of the victims.

The city refused the request.

In 2005 Horning’s organization filed a lawsuit against the city. It submitted a letter from Chief Medical Examiner Charles S. Hirsch, which stated it was “virtually certain that at least some human tissue is mixed with the dirt at the Staten Island landfill,” The New York Times reported.

The lawsuit was dismissed in 2008. Judge Alvin K. Hellerstein stated, “The grave harm suffered by the plaintiffs in this case is undeniable” but “not every wrong can be addressed through the judicial process.”

From a legal perspective, “plaintiffs have no property right in an undifferentiated, unidentifiable mass of dirt that may or may not contain the remains of plaintiffs’ loved ones,” the judge stated.

An appeal to the Supreme Court failed two years later.

“It was a Catch 22,” Horning said. She couldn’t prove the remains of her son were at Fresh Kills. At the same time she was denied access to search for them.

In 2010 the work on the park was well underway. The city had already conducted years of public meetings, and work had begun on a playground on the site’s northern edge, as well as a sports center on the southern edge.

In October 2010, the landfill opened its gates to the public for the first time for a now annual one day Sneak ‘Peak.’ This year’s event involved kayaking, biking, birding, public art, kite flying, and walking tours.

It wasn’t a landfill anymore. No droves of rats. No packs of dogs. No flocks of seagulls. Even the smell was mostly gone. Now it was the Freshkills Park.

Still, there is a long way to go before its completed. A 3-mile greenway will open in half a year on the park’s eastern edge. It will cost some $9 million. A 25-acre north section will open in about a year and a half at the cost of $22 million, according to Eloise Hirsh, administrator of Freshkills Park and president of the Freshkills Park Alliance.

The whole park should be finished in about 25 years, the final price tag to be determined, according to Hirsh.

Moreover, the park needs to overcome the skepticism of local old-timers who still remember the area’s soiled past.

“Just because they say that it’s safe, I don’t necessarily believe that it’s safe,” Wishko said. She wasn’t sure about strolling the paths with her 4-year-old, knowing what’s beneath their feet. Several other locals expressed similar reservations.

Despite some lingering concerns, the park has largely been welcomed.

“It helped everything,” Kathy O’Leary Garbarino said. “It helped quality of life, it helped people’s peace of mind, it helped health reasons.” Homes in the neighborhood are selling again, she said.

With grass sowed and trees planted, hawks, bees, and deer have found their way back to Freshkills.

“It’s wonderful,” Wishko said. She came for the most recent Sneak ‘Peak,’ on Sept. 28, with her whole family to “spend the day on a garbage dump,” as she put it with a laugh. “Hopefully they’ll open up quicker than it’s supposed to.”

As for the debris from ground zero, it’s concentrated in a marked area of about 50-acres, and there are discussions about a possible monument to the victims.

That is of little consolation to Horning. “They can gift-wrap it all they want,” she said. “They still put them on top of garbage.”

“I strongly suspect that there are unidentifiable remains. Just absolute dust—you could not separate it from the concrete,” said Charles G. Wolf, whose wife, lost in the tragedy of 9/11, was never found. “It’s one of the things that nobody wants to talk about.”

Still, he thinks that now it’s too late and life has to go on.

“We do carry on. Someone was killed in a traffic accident. Do they close that section of the road forever?” he asked. “No one knows for sure if there are remains in there. … But we have to realize that the person,” he paused, “the person is not there.”

“Would I want to see it when it opens? I think I would, yes,” Wolf said.