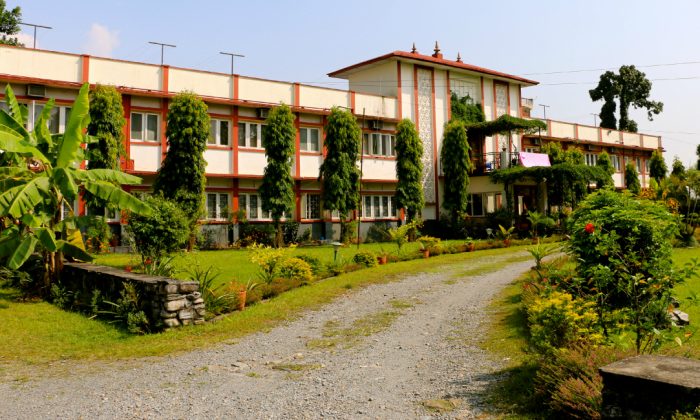 POKHARA, Nepal—It’s been 43 years since the CIA cut off support to the Tibetan guerillas that the agency trained and armed to fight a covert war against China. Yet, a monument to the CIA’s secret war in Tibet is still standing in Pokhara, Nepal.

The former Hotel Mount Annapurna building sits on a quiet side street off the Pokhara airport. Established in 1972 with CIA funds, the hotel was meant to give former Tibetan resistance fighters based in Nepal’s nearby Mustang region a livelihood and a future as they laid down their arms and transitioned to life as refugees.

Tibetan guerillas and their families ran the hotel until it closed in 2010. Today, the Hotel Mount Annapurna building is a nursing school. The aging concrete structure with 1960s lines looks tired and nondescript. Paint is peeling off the exterior walls. The once lush and well manicured landscaping is overgrown and wilted. This relic of the CIA’s secret Cold War guerilla campaign in Tibet is now locked behind a rusting metal gate and easily overlooked. It is in a part of town into which tourists rarely venture.

The area around the Pokhara airport was prime real estate in the 1970s. But business slowly dried up as Pokhara’s tourism center of gravity shifted to the Phewa Lake shoreline to accommodate waves of hippies and trekkers. The Lodrik Welfare Fund—an NGO that former Tibetan resistance fighters created in 1983 to provide welfare for veterans and their families—currently owns the property and rents it out to the Gandaki Medical College.

“This used to be the best spot, but we shut down because there was no business,” said Tsultrim Gyatso, chairman of the Lodrik Welfare Fund and former manager of the Hotel Mount Annapurna. His father was a Mustang resistance fighter.

Gyatso was born in Pokhara in 1972. He worked at the Hotel Mount Annapurna from 1989 to 2010 and was the hotel’s manager at the time it shut down.

Gyatso currently works next door to the former hotel property out of the same offices that were a command center for the Mustang resistance in the 1960s and 1970s—the office he works in was opened in 1962 for the resistance movement. “My father worked in this very office when he was an intelligence officer for the resistance,” Gyatso said.

Today there are few visible clues to the former hotel’s guerilla heritage. In the lobby there is a framed poster of Mt. Kailas (the most holy mountain in Tibet), which is hanging next to a painting of the hotel in its glory days. There is also a painted mural on the wall of the main stairwell, the imagery of which pays homage to the fighting spirit of Tibet’s resistance fighters.

The security guard at the gate offered a confused look when asked about the building’s Cold War history. Younger shop owners on the adjacent street shrugged their shoulders politely and said they knew nothing about Tibetan resistance fighters. A few older shop owners, however, acknowledged the hotel used to be run by “Khampas”—a reference to Tibet’s Kham region, which is known for its warriors and bandits and was the birthplace of Tibet’s guerilla campaign after the 1950 Chinese invasion.

Those who knew about the hotel’s past, however, were reluctant to talk about it. Questions about the CIA and Tibetan resistance movement spurred worried looks and anxious body language. One older shop owner, a Sherpa from the Solukhumbu region near Mt. Everest, offered an explanatory hint when he claimed pressure from Maoist rebels during Nepal’s civil war (1996–2006) forced the hotel to shut down. As proof, he pointed to Maoist graffiti on a wall across from the hotel’s entrance.

“They’re bullies,” the old Sherpa said, speaking about Maoist rebels. “And they didn’t get along with the Khampas.”

Gyatso disputes the claim, however, and insists that a struggling bottom line forced the hotel’s closure. “We have a friendly relationship with the Maoists,” Gyatso said. “Some of them stayed in the hotel. I know many old Tibetans think communists are the enemy, but we never had a problem with them.”

Gyatso did acknowledge, however, that Communist labor unions contributed to the hotel’s demise. The hotel initially employed only Tibetans, but pressure from unions spurred the hotel to ultimately employ a mix of Tibetans and Nepalese. At its height, the hotel had about 40 employees. But as business tapered in the 1990s and early 2000s, Gyatso said the unions tied his hands when he tried to streamline staff and cut down on expenses.

“The Unified Marxist-Leninist Party workers union gave us a lot of trouble,” he said. “They demanded a lot and basically put us out of business.”

The Lodrik Welfare Fund is an evolution of the Mustang resistance bureaucracy, which is now dedicated to welfare, not armed insurgency. While the hotel was operational, it generated revenue for the Lodrik Welfare Fund to finance schools and public works for Tibetan refugees around Pokhara and to provide benefits for Tibetan resistance veterans. Now only a thin slice of revenue from the building’s rent goes toward the NGO’s welfare projects. The majority of funding comes from foreign sponsors—many of whom are anonymous Americans.

The CIA did not immediately respond to a request for comment on whether it was still providing any support for the veterans of the Mustang resistance living around Pokhara. But Gyatso said there was no ongoing U.S. government support for the guerilla fighter veterans or their descendants.

“There’s no official U.S. support,” Gyatso said. “But of course the U.S. should help us. They used us to fight China for them and then they dropped us on the spot. They should do something for us.”

The CIA began training and arming Tibetan guerillas in 1957. Initially, the Tibetan resistance fighters, called the Chushi-Gangdruk, were based inside Tibet. But in the 1960s groups of fighters also set up bases in Nepal’s Mustang region, from which they conducted raids across the border into China.

The Mustang resistance, as the Nepal-based fighters came to be known, were supported by CIA funds until 1972, when President Richard Nixon normalized relations with China and the CIA’s Tibetan operation ended. The Mustang resistance continued without U.S. support until 1974, when Nepal, bowing to pressure from China, sent soldiers into the arid Himalayan region to root out the Tibetan guerillas.

The Hotel Mount Annapurna was the CIA’s olive branch to the Mustang fighters, attempting to give the former guerrillas (many of whom had no education or professional skills beyond soldiering) a chance to make a livelihood as they transitioned to life as refugees.

“After surrender, it took at least 15 years before the soldiers could finally reintegrate into normal life,” Gyatso said. “The CIA was good in the beginning, but they abandoned us.”

Today, resistance fighter veterans and their descendants still do not have Nepalese citizenship, and most do not have paperwork identifying them as refugees—making it impossible to travel abroad, get a driver’s license, open a bank account, or start a business. They live in refugee camps around Pokhara and are largely dependent on welfare for their survival.

“Babies don’t even have birth certificates,” Gyatso said. “We just need a paper to identify ourselves so we can work.”

The Mustang resistance raids ultimately did little to seriously damage China’s occupation of Tibet, but the intelligence Tibetan fighters gathered was sometimes of great value to the United States. A raid on a Chinese convoy in 1961, for example, killed a Chinese regimental commander and provided the CIA with what it later referred to as the “bible” on Chinese military intelligence.

A faction of Mustang resistance fighters under the command of Baba Yeshi collaborated with Nepal in 1974 by giving up their compatriots’ positions, clearing the way for an operation that killed many Tibetan guerillas, including their CIA-trained commander, General Gyato Wangdu. Yeshi’s Tibetan collaborators went on to create prosperous carpet-making enterprises in Kathmandu. And unlike the descendants of the Mustang resistance fighters around Pokhara, the descendants of the Tibetan collaborators enjoy Nepalese citizenship, according to Gyatso.

Yet, Gyatso added, there is no more bad blood between the descendants of the Mustang resistance and those who betrayed them.

“There are no more divides between factions of the Mustang resistance,” Gyatso said. “We are all Tibetan. The history is there, yes. But we are all against the Chinese. Bad things happened, and His Holiness (the Dalai Lama) has forgiven them.”