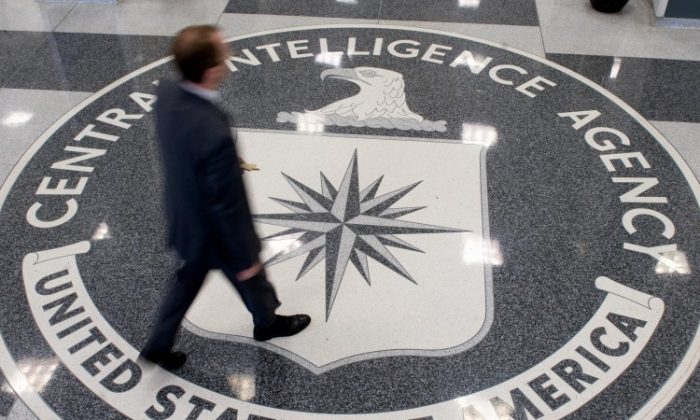 A man walks across the Central Intelligence Agency (CIA) logo in the lobby of CIA Headquarters in Langley, Virginia, in this file photo from 2008. (Saul Loeb/AFP/Getty Images)
News

The CIA Bets All in the Cloud, an ‘Intelligent’ Move

The value change that cloud computing is delivering to its clients—low cost and rapid deployment—has moved to the top tier agency of the U.S. federal government in the Central Intelligence Agency (CIA).  A massive paradigm shift is taking place.  And the CIA just announced that it has gone all in with a $600 million bet with Amazon’s AWS cloud computing platform.

At the GigaOm Structure Data conference held at the Chelsea Piers in lower Manhattan on the first couple of days of spring, Ira “Gus” Hunt, the CTO of the CIA, took to the stage before lunch.  For the next half hour he mesmerized the audience of professionals with his keen insight, understanding, and knowledge of the implications that the new digital era will bring to the world across all cultural and socio-economic strata.  In his commanding view, he sees the big trio of Social, Mobile, and Cloud Computing, fed and supported by Big Data, as the game changer.

Combined, those technologies are akin to what the crossbow did for the medieval peasant in making once impenetrable armor of the knights discarded to the scrap heap of history or what oil and the automobile did in making 19th-century horse-drawn carriages obsolete.

The old model of one to many—with Mr. Hunt rattling off the New York Times, Wall Street Journal, Washington Post, and TV news broadcasts as those archetypes—has been replaced by the new “many to many” model, as people and their mobile devices become walking data points and sensors.

To that end, he held up his CIA smartphone, and said cryptically, “Even if you turn off your cell phone you can be tracked,” to which a few people looked out to the Hudson River and thought about ditching their mobile devices.

‘Secure Mobile’ Priority One for the CIA

With a plain vanilla slide deck—white background with black font and no graphics other than the CIA’s CTO logo—Gus Hunt drove home how dramatic the change is and will be.  He noted the sizes of some data stores, from Facebook today cloud-hosting an amazing “35% of all digital photographs in the world” to Google’s even larger data collection in YouTube, search engine webpages, and Gmail—not to mention Google Plus or Android mobile apps.

After highlighting the three business units inside the CIA—including covert operations—Gus Hunt explained the six areas of the CIA’s Big Data mission focuses on in the rapidly changing world of technology.

“Priority 0 is ‘Secure Mobile,'” he said, showing the six points in the CIA-odd numbering system of 0-5.  “After mobile there’s ‘Advance Mission Analytics,'” and the third being the IT framework of widgets and sensors—or how to track, monitor, and follow the streams of data and make sense of them.  “We look at ‘Security-as-a-Service’ (the 4th IT priority) as critical,” and then finished with ‘Data Harbor’ or Data-as-a-Service (DaaS) and ‘Cloud Infrastructure-as-a-Service’ (IaaS) as the components of the CIA’s new digital ecosystem.

With the Norwegian telecom giant, Telenor, being hacked earlier this week by a Chinese Trojan horse—malware delivered by email with a social engineered phishing expedition—which emptied the “contents of the top executives computers” in a massive industrial espionage, the CIA is aware of the importance of securing data.  This will be especially true in the mobile era, which is starting to see hackers targeting those devices and their flimsy security protocols that neither Apple nor Google’s Android, to name the two leaders, have fully addressed.

“We are in the High Noon of the Information Age,” Hunt said, with his stylistic brio of delivering yet another metaphor to remind the GigaOm crowd of how vulnerable we all really are.  With Big Data growing faster than both government and law can keep up with regarding the individual, he lofted the question: “Who owns your information?  And what rights do you have to that information?”

Unanswerable today, as the era of Big Data is just starting to expand at hyper-speed like the ‘Big Bang’ of the universe, Gus Hunt pointed out the new three ‘Energy Forces’ in yet another simple, but brilliant slide comprised of ‘Nano, Bio, and Sensors.’

What does all of that mean?  The CIA as it collects vast oceans of data from all over the world, will not get rid of it, and that automation via mobile sensor platforms will change the way we work, socialize, communicate, and understand the nuances of socio-economic and international trends.

“We care about seven constructs for data analytics,” the CIA CTO said.  Three of them include nouns, as in people, places and things, with the other four being organizations, time, events, and concepts.

Meeting up with CTO Gus Hunt

After the presentation, I visited CEO Damian Black of SQL Stream to discuss writing an article, when Gus Hunt showed up to the booth.  The three of us took up a conversation.

Mr. Hunt said, “The CIA, like other federal agencies, are constricted by the sequestration today in Washington.  So we have been looking to move away from the long-term, heavy up front costs of software licenses, such as Oracle.  We don’t want to write the million dollar checks anymore in the first year or be locked in.  We are looking at the service model.”

“So the CIA is moving to a SaaS subscription model of monthly payments?” I inquired.

“Yes, Software-as-a-Service.  That way it gives us more flexibility on the products and tools we use,” he replied, which keeps the monthly costs predictable and flat.

“How does the CIA today work in reviewing and purchasing new technology products and services?” Damian Black asked.

“The CIA has iLab, which is an unclassified technology review unit that, if interested, will test new products with real end users.  From there the CIA gives feedback reports.  So if nothing else comes of the relationship, the vendor gets real feedback on the utility of their products or services,” Mr. Hunt answered.

“If we like what we see, then the next step is to bring the company and their technology over the fence into the classified area, where we begin negotiations,” he added.

Unlike many other bureaucratic agencies in our federal government and those abroad, the CIA’s process seems streamlined, which goes back to Mr. Hunt’s point that technology is changing faster and faster.  The CIA’s Big Data mission has to keep up.

On the CIA-Amazon cloud, I asked, “The deal announced with Amazon earlier this week is to build an on-premise cloud?”

“That’s correct.  The cloud with be onsite over (the classified) fence,” he said, where they will store all of their collected data to help them “connect the dots” in the future.

When I asked about his career of moving up the CIA hierarchy from an intelligence analyst to now the CTO of one of the top government agencies in the world, he said he wouldn’t answer that on the record. But he did say, “The CIA looks for an array of people with various backgrounds.  Diversified people.”

Talent management is one of the key tenants of our main intelligence agency.

Understanding the two massive outputs that Big Data will deliver to the person, consumer, enterprise, and government agency in the future, Hunt said, “Information has time and value,” meaning it has to be actionable in real time and has to have “context.”

Mr. Hunt concluded his presentation by looking at his watch, than to a GigaOm production manager, and said, “Do I have time to discuss what the CIA is doing on cyberterrorism?… No?  Okay, next time.”

The big dramatic cliffhanger left the audience buzzing well through lunch.  Any presenter before or after Mr. Hunt has a steep hill to climb to be half as informational, entertaining and provocative as the CTO of the CIA.