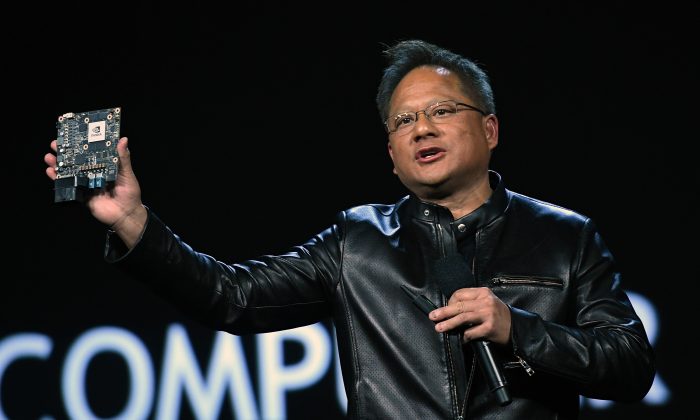 Semiconductor stocks have been on a hot streak in 2017, with demand booming from all sectors of the economy
By Fan Yu

The stock performance of companies in the semiconductor sector has been spectacular this year.

The Philadelphia Semiconductor Index is up more than 39 percent year-to-date, as of Oct. 27. That’s a massive outperformance of the broader Nasdaq Composite Index, which is up 24 percent since Jan. 1.

It has been a banner year for companies involved in the design, manufacture, and distribution of chips, such as Applied Materials Inc., Nvidia Corp., Intel Corp., and Advanced Micro Devices Inc. (AMD). A few companies’ performance stands out even more, with shares of Applied Materials up nearly 76 percent and Nvidia up 89 percent since the beginning of 2017.

What’s driving the growth of these companies? The answer is that everything is becoming digital and needs computing power behind it, from automobiles, to the internet of things, to research on artificial intelligence and machine learning, as well as the processing of cryptocurrency transactions like bitcoin.

Once upon a time, the highest-value electronic system in cars was the radio, and the mechanical steering column was directly attached to the front axle.

Today, computers control the vital functions of cars, from human interfaces, such as Bluetooth modules and backup sensors, to key vehicle operations, such as when to apply all-wheel-drive or engage the stability system. PwC predicts that “vehicle electronics could account for up to 20 percent of a car’s value in the next two years, up from only about 13 percent in 2015.”

Artificial intelligence and machine learning will impact virtually all applications of the internet of things.

As chip demand from computers and mobile phones plateaus with market saturation, experts believe the coming automotive revolution will be a growth driver for semiconductor products.

Each one of these innovations will require computing power and software to manage, driving demand for computer chips produced by semiconductor firms.

That announcement came a month after Intel acquired Mobileye for $15 billion, providing the chipmaker with Mobileye technologies such as 3-D vision, mapping, and proximity sensor. Intel plans to have 100 self-driving vehicles on the road by the end of the year.

Semiconductor firms are also at the forefront of artificial intelligence (AI) and machine learning.

Nvidia, one of the best-performing stocks of the year, is best-known for its graphics processing units. But in recent years, it’s also become a leader in artificial intelligence research.

The company’s DGX supercomputer was launched earlier this year, with integrated hardware and software to train AI models. Global Equities Research analyst Trip Chowdhry told clients in August that retailer Walmart is building a network of data farms using Nvidia’s AI chips. The AI systems will be trained to analyze customer data for future applications, according to Barron’s.

AI and machine learning will impact virtually all applications of the internet of things (IoT), a loose term used to describe smart or internet-connected devices.

Using autonomous driving as an example, a Level 5 self-driving vehicle must be intelligent enough to quickly address unexpected situations such as road debris, construction road closures, emergency vehicles, and impaired drivers on the road.

But self-driving vehicles occupy just one corner of the IoT market.

Data research firm IHS Markit estimates that the number of IoT devices worldwide will jump 12 percent annually, reaching 125 billion by 2030. Such devices aren’t limited to consumer-oriented electronics such as cars and “smart” home appliances, but their bigger potential lies in applications for the industrial sector, such as shipping and transportation, manufacturing processes and robotics, and even medical devices.

An unexpected boost for semiconductor firms Nvidia and AMD has been the profitability of digital currency mining, or the process of confirming transactions on crypto networks.

Miners of the two biggest digital currencies by market capitalization—bitcoin and ethereum—have led to huge demand for and a shortage of the graphics processing units produced by AMD and Nvidia, which power such mining computers.

The demand for mining power is driven by the dizzying growth of bitcoin and ethereum in 2017. Bitcoin, on a U.S. dollar basis, has gained around 500 percent from Jan. 1 to Oct. 28. The year-to-date increase for ethereum has been even more extreme—it is up almost 3,500 percent.

AMD and Nvidia have introduced graphics cards without video output, specifically catering to the mining community. But AMD isn’t as bullish on the longevity of this trend. CEO Lisa Su told analysts on its quarterly earnings call that “in terms of headwinds … we’re also predicting that there will be some leveling-off of some of the cryptocurrency demand.”