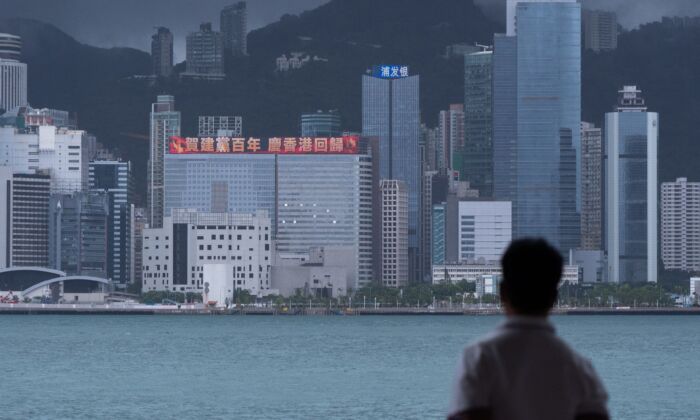 A man looks at a building with an LED billboard displaying a slogan celebrating the 100th anniversary of the Chinese Communist Party and the 24th anniversary of Hong Kong's return to China in Hong Kong, on June 29, 2021. (Bertha Wang/AFP via Getty Images)
HK Current Affairs

The political system of Hong Kong is now almost no different from a city in mainland China, after the ruling Communist Party’s overhaul threatened the free business climate guaranteed by its separate judicial system, a report by the Taiwan Mainland Affairs Council (MAC) says.

The Chinese Communist Party (CCP)-imposed national security law (NSL) has chipped away at the city’s core values of democracy, freedom, and human rights. Now, the one country, two systems policy has a “mere nominal existence,” according to the report (pdf) released in July.

The NSL was passed by China’s rubber-stamp legislature on June 30, 2020. The law criminalizes four broadly defined categories of offenses including: secession, subversion, and collusion with a foreign country. Persons found guilty of violating this law can face up to life in prison. In addition, cases can be adjudicated in mainland China and the law applies to anyone, anywhere in the world.

“The chilling effect overwhelmed the city. Over 60 percent of Hong Kongers are gloomy about the future environment and personal freedom,” said the MAC report, observing the city’s overall development from July 2020 to July 2021.

The promise of “a high degree of autonomy” and “Hong Kong governed by Hong Kongers” is now eroded, said the report, issued 24 years after sovereignty was handed over to China.

On July 1, 1997, Hong Kong was returned to Chinese control after a century and a half of British colonial rule. The handover was meant to establish a “one country, two systems” relationship between China and Hong Kong that would last until 2047, with Hong Kong existing as a special administrative region.

However, the sweeping national security law has transferred Hong Kong from a “patriots governing” semi-autonomous city to a “CCP completely controlled” city, through changing election rules and punishing pro-democracy politicians, said the report.

In 1997, Beijing agreed that Hong Kong would control internal affairs through its own political structure. The MAC has since published an assessment on Hong Kong and its relationship with China every year.

In November 2020, four Hong Kong legislators were disqualified immediately after the Chinese regime announced the resolution allowing authorities to expel those who “support independence, seek foreign interference, or other activities that endanger national security.”

Civil servants in the government were asked to sign a written oath of allegiance to the CCP triggering a wave of resignations.

Later in March of this year, due to election reform measures, candidates for the city’s parliament were vetted by a separate committee first, allowing the CCP to easily bar critics.

Hong Kong police data cited by the MAC showed that among 117 arrested in the first year of the enactment of the law, 55 were from the pro-democracy camp and had run in the primaries of the previous year’s Legislative Council election.

The report stated that Taiwan would pay attention to the CCP’s involvement in next year’s election because the polls show that over 70 percent of Hong Kong citizens lost confidence in the current chief, Carrie Lam.

Hong Kong’s mini-constitution—the Basic Law—which protects the independent judiciary, democratic rights, and election of parliament, was supposed to stay in effect until 2047.

Nonetheless, as the Legislative Council became more submissive, the Chinese regime intensified political pressure on the judicial system, using the national security law to undermine the independence of the executive, legislative, and judiciary branches. The law was also applied retroactively and without a jury.

For example, Media Tycoon Jimmy Lai was charged under the NSL for involvement in pro-democracy protests in 2019. He was denied bail under pressure from the CCP’s mouthpiece media. Tong Ying-kit, the first defendant charged under the national security law, was tried without a jury.

Beijing’s tightened control and dominance increases the risk of doing business in the city even though it remains a separate customs territory to the mainland and operates as a free port status, with no tariffs charged on the goods for import and export.

In addition, Hong Kong has been booted off this year’s index of economic freedom published by a conservative think tank in March, which it had dominated for over two decades. The Heritage Foundation explained that the economic policies in the city “are ultimately controlled from Beijing,” even though its citizens enjoy more financial freedom than the average citizen in China.

The MAC said that Taiwan continues its support of Hong Kong’s democracy and freedom through practical help. But it emphasized that it is reviewing the Laws and Regulations Regarding Hong Kong and Macao Affairs to stop the regime’s infiltration through capital and people.

In July, the Taiwan government called back all but one staff member from its Hong Kong office as the authorities refused to renew their visas. The Hong Kong government required staff to sign the “one-China commitment,” which would mean they admit Taiwan is a province of communist China.

Meanwhile, Hong Kong had already closed its office in Taiwan’s city of Taipei in late May, claiming that assistance to the city’s pro-democracy activists “grossly interfered” with its affairs and “created irretrievable damage to Hong Kong-Taiwan relations.”

Taiwan launched the Taiwan–Hong Kong Office for Exchanges and Services under the Hong Kong Aid Project on July 1, 2020, offering support to people fleeing after the NSL was imposed. The Taiwan immigration department’s data shows that residential permits issued to people from Hong Kong almost doubled in 2020.