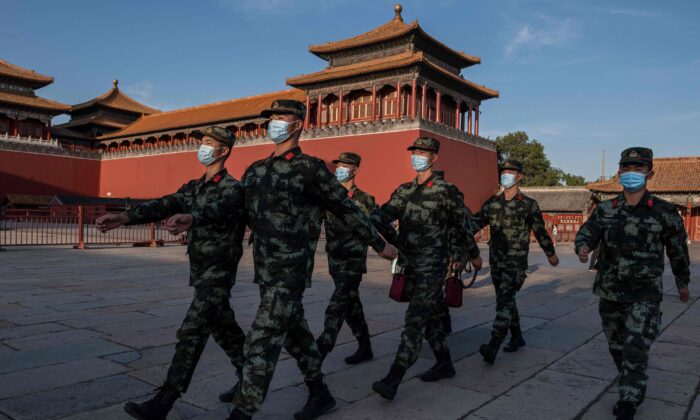 Paramilitary police officers wearing masks march next to the entrance of the Forbidden City in Beijing on Sept. 20, 2020. (Nicolas Asfouri/AFP via Getty Images)
Thinking About China

When much of the Western world was celebrating the Christmas holiday, Beijing’s long-arm policing of Chinese nationals abroad kicked into overdrive.

The Chinese regime’s Operation Sky Net—the international arm of a so-called anti-corruption campaign—reached a new chilling landmark when it returned its 10,000th victim.

It’s but one of many stark revelations about China’s long-arm policing of Chinese nationals around the world, because of a new report from Safeguard Defenders; it isn’t necessarily the most chilling one.

In 2014, shortly after the start of his signature anti-corruption campaign, Chinese leader Xi Jinping initiated what would become Sky Net, and perhaps its more famous sub-operation, Fox Hunt. At the time, Beijing claimed that some 18,000 officials had fled the country and needed to be brought back. Like the anti-corruption campaign, the operations were more about taking down Xi’s political rivals than meting out justice.

Since then, the number of Chinese asylum-seekers has set new records each year. By 2020, during the pandemic, the number had risen 700 percent from 2012, when Xi first came to power, according to UNHRC.

On top of that, with a mass exodus of Uyghurs from Xinjiang, the regime certainly has more reason to expand its policing abroad, either to intimidate and silence its targets, or, as the new report reveals, force them to return to China.

Both Sky Net and Fox Hunt engage in a wide variety of tactics to force victims, including non-Chinese citizens, to return to China. In fact, it has been discovered that since 2018, an official legal interpretation has been instructing police on how to retrieve these individuals. Formal legal proceedings, such as seeking extraditions, constitute very few of the cases. Most of the operations revolve around either threatening or detaining victims’ family member(s) who are still in China; sending agents from the police or National Supervision Commission (NSC) on illegal overseas missions to intimidate and harass victims into returning “voluntarily”; and simply kidnapping victims who are in Asia.

The legal interpretation actually discusses, in plain terms, the use of entrapment, kidnapping, as well as carrying out illegal overseas operations and forcing people to travel to third countries wherein China can have them returned easily (with or without assistance from the foreign government).

I repeat that all the above is written down in an official document guiding the Sky Net operation.

Even though the pandemic put a slight damper on the ability of Sky Net to secure a victim’s return through illegal means, it still managed to keep up. And thousands have been returned in 2020 and 2021, despite the significant travel restrictions in place, having reached 10,000 toward the end of 2021.

The increased Chinese diaspora around the world, and the brazen operations of Sky Net abroad—which Chinese authorities sometimes even gloat about in local media on how they illegally forced a certain individual to return from, for example, France—speaks ill of the future. With pandemic restrictions lifting, these operations will be carried out even more.

Foreign governments have a rocky road ahead in deciding how to best counter these operations, which not only violate the national sovereignty of target countries but completely sidelines any normal judicial processes for such cooperation.

So far, the NSC claims these 10,000 victims have been returned from more than 120 countries around the world. The true number might never be known, and according to the Safeguard Defenders report, the operations were only able to retrieve about half of the identified targets. Just how often China attempts these operations is simply unknown. The government data, unreliable to start with, only focused on individuals accused of economic crimes, and it is well known that many dissidents, particularly the Uyghurs from Xinjiang, also are being targeted. The 10,000 figure is just the tip of the iceberg.

Western foreign ministries have, on the whole, kept silent on the Chinese regime’s long-arm policing outside of its borders. And the few times governments have been asked about it, they seem either unaware or make no effort in tracking such operations. The U.S. government has moved to prosecute a group of such agents and operatives, but most of them go unnoticed or unpunished for diplomatic reasons. Even worse, perhaps, is that there is no system for protecting Chinese citizens who have sought a safe haven abroad. Thus, this is one of the reasons why very few victims who have lived through such an experience speak about it publicly.

The Safeguard Defenders report has laid bare a clear and present danger to national sovereignty around the world. It’s high time for foreign ministries to take action—to investigate, expose, and counter such behavior, as well as to adopt schemes for protecting those targeted individuals.