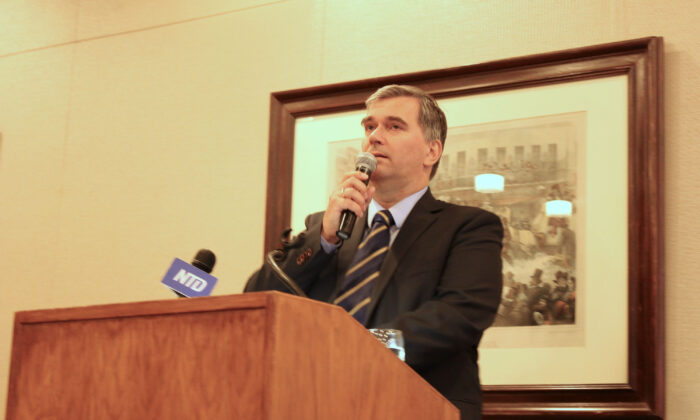 Dr. Torsten Trey, director of Doctors Against Forced Organ Harvesting, speaks an event on organ harvesting at the Harvard Club on the sidelines of the U.N. General Assembly in New York City on Sept. 25, 2019. (Cathy He/The Epoch Times)
EpochTV Reviews

Since coming to power in 1949, the Chinese Communist Party has only ever focused on one goal: profit.

During the early years of the party, then-leader Mao Zedong set forth ambitious “5-year plans” that solely emphasized economic growth. These “5-year plans” featured wildly unreasonable production targets, which caused government officials to utilize unethical methods to meet them. In many cases, local officials resorted to collecting excessive amounts of agricultural produce from rural farmers to meet production quotas. While this method did help fulfill the party’s export objectives, it resulted in The Great Chinese Famine that killed between 15 and 55 million people, making it the largest famine in human history.

Now, more than 50 years later, we see this same pattern repeating itself in China today. In their attempt to dominate the organ transplant industry, the Chinese Communist Party has turned to a system of forced organ harvesting. Ignoring any ethical considerations, the party utilizes its extensive number of detention camps spread across the country to fuel its massive forced organ harvesting program. These detention camps hold prisoners of conscience who have been imprisoned solely for refusing to submit to the will of the Chinese Communist Party.

Recent evidence suggests that the country’s organ trade industry is worth over $1 billion every year. But this method of using prisoners of conscience also serves another purpose in addition to profit. The Chinese regime uses this opportunity to suppress specific groups in the country, namely, members of the Muslim Uyghur community, religious Christians, and practitioners of Falun Gong. These are not even criminals, but everyday citizens who are imprisoned for holding political or religious views contrary to those of the Chinese Communist Party.

The Chinese Communist Party has tried to cover up the widespread nature of their forced organ harvesting program, whether through bribes or intimidation. But this hasn’t prevented international pressure from numerous governments calling on China to end the horrific practice. In addition to international human rights circles such as the U.N., the United States, Canada, and the United Kingdom have all publically called on the Chinese regime to end the practice.

Yet, the practice of forced organ harvesting in China is still ongoing today. Prisoners of conscience are still being held in detention camps as a living pool of human organs to be used in the regime’s billion-dollar organ harvesting program.