The Chinese Regime Is Ready to Attack Taiwan 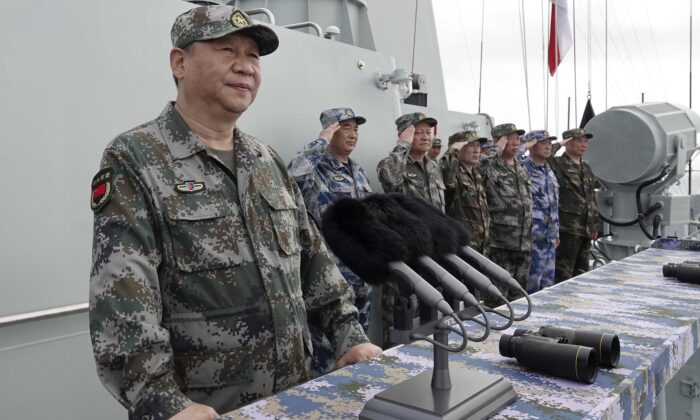 The Chinese regime’s recent activities in the vicinity of the Taiwan Strait have greatly increased, and its internal activities signal that it’s prepared for an attack on Taiwan.

On March 23, U.S. Adm. John Aquilino said during a hearing over his nomination to become commander of the U.S. Indo-Pacific Command that an attack against Taiwan might occur much earlier than most people expect.

The Chinese Communist Party (CCP) has been making final preparations against Taiwan over the past two years. Still, the timing and the intensity of the attack probably depend on whether they believe the United States will fully support Taiwan.

In the event of war, the CCP would probably use the air force as its main force to control the Bashi Strait in southwestern Taiwan and block U.S. forces from the Indian Ocean and Singapore, while likely using its Liaoning carrier battle group to control Okinawa and defend the mainland from Japan and the U.S. Army.

On Feb. 10, Chinese leader Xi Jinping inspected the military base in Fujian, a province on the southeastern coast of China that’s less than 200 miles (321 kilometers) from Taiwan, or about 30 minutes by air.

Xi visited the Second Mobile Corps of the CCP’s Armed Police Force in Fujian to deliver a speech that stressed the importance of the military base’s combat readiness, according to the CCP’s official media outlet, Xinhua.

The mission of the Armed Police Mobile Corps differs from that of the general provincial Armed Police Corps, and its units are generally equipped with more powerful weapons and equipment, including armored vehicles, infantry vehicles, rapid-fire guns, grenade guns, and unmanned aerial vehicles. An official noted that the mobile corps’ task is to “undertake the handling of rebellions and riots, counter-terrorism and stability maintenance, cross-regional support operations, handling group fighting, and urban special operations.”

The armed police mobile corps is also equipped with helicopters; the Second Armed Police Corps has more than 50.

The target of the Second Mobile Corps of the Armed Police Force is most likely Taiwan.

The PLA Rocket Force, which is China’s special service responsible for nuclear and conventional missiles, would take the lead in the event of an attack on Taiwan. The Rocket Force would be followed by the Air Force, then followed by the Navy and the Assault Force.

Once offensive troops can establish a beachhead position in Taiwan, or use airborne to gain control of a certain area, the next wave will be the Second Mobile Corps of the Armed Police. They’re responsible for repairing or expanding the airport terminal and providing conditions for subsequent troops to enter.

The mission of the Fourth Marine Brigade is to raid the southern part of Taiwan or to seize Dongsha Island, so the unit is known as the assault force to seize the island.

Why is Taiwan so important to Xi and the CCP?

Xi is very interested in Taiwan and has a deep understanding of the self-ruled island, which lies about 100 miles (161 kilometers) off the coast of southeastern China, across the Taiwan Strait.

Xi was once an active soldier in China’s People’s Liberation Army (PLA). After he left Tsinghua University in 1979, he first served as secretary in the Office of the Central Military Commission of the CCP. In 1983, Xi left the army to serve as secretary of the Party Committee in Zhengding county, Hebei Province. Two years later, he was transferred to Xiamen, Fujian Province, beginning his 17-year political career in Fujian as the deputy mayor.

Of course, real victory in war is never won in combat alone. Logistics, transportation, and internal control also are extremely important factors that lead to success in war operations. The Chinese regime has also been busy making preparations in those areas.

Last year, the CCP began to purchase a large amount of grain, oil, and various minerals from overseas, actions that raise serious concerns. The CCP officially claimed that China’s domestic grain output hit a record last year, and yet the government’s purchase of grain from overseas has increased by about two times.

Recently, news came out from Shanghai that all nonresidents entering the city must register within 24 hours or face a fine of 5,000 yuan. As China’s largest city, Shanghai is the nation’s largest commercial trading center. Commercial transactions mean a large number of migrants, so the new policy is troubling.

However, it makes sense amid the perspective of war or a pre-war preparation period. If the CCP attacks Taiwan, a missile raid is likely from across the strait, which would trigger countermeasures by Taipei. Once war escalates, Shanghai is likely to become a target, as might other cities in East China and South China, especially those with important traffic routes.

Judging from all these superficial signs, the CCP appears to be making preparations for a large-scale attack on Taiwan.

In the past two years, the United States’ cooperation with the Taiwanese military has been an excuse for the CCP’s war preparations, which have been proceeding at an accelerated pace. At present, a U.S. Asia–Pacific NATO-style alliance hasn’t yet taken shape, and a large number of advanced weapons sold to Taiwan haven’t arrived for deployment.

It may take about five to six years for the United States to deliver the weapons to Taiwan, which is why senior U.S. generals worry that the CCP will attack Taiwan within six years.

For the CCP, these six years are a precious window. China may lose the opportunity to control Taiwan if the following events occur: mainland China’s economic growth slows; its military technology development begins to lag; or China is contained by the United States and its allies such as Japan, South Korea, India, and Australia.

If the CCP is inclined to take risks, it may take Taiwan by force in the next year or two, while the window of opportunity hasn’t yet closed. Otherwise, the opportunity may be lost forever for this third generation of CCP officials.