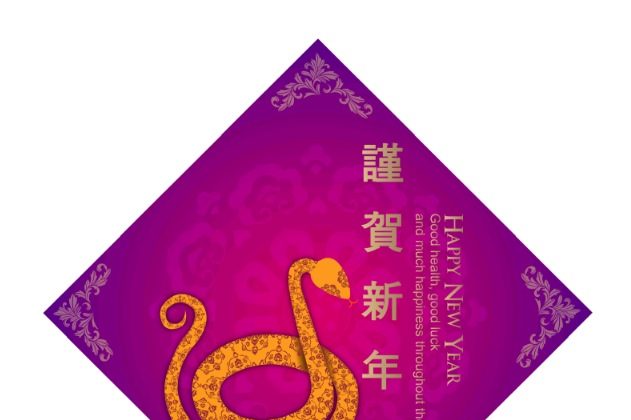 The Chinese New Year: More About the Year of the Snake

The Chinese New Year is determined each year by the lunar calendar, a calendar used in many countries that have been influenced by Han Chinese culture, including Japan, Korea, and Vietnam. By the Gregorian calendar, Chinese New Year falls each year sometime between January and February. It marks the end of winter and the beginning of spring, also called 立春 (lì chūn) in Chinese.

Though the Chinese New Year is considered “Chinese,” it is actually an important celebration in many countries with significant Chinese populations. These countries include Singapore, Thailand, Malaysia, and the Philippines. In the United States, the Chinese New Year can be experienced in Chinese communities and Chinatowns all around the country.

Before the New Year, it is traditional for families to thoroughly clean their houses, much like the spring cleaning of the West. However, this cleaning is also symbolic in nature. Sweeping the dust out the door is seen as a symbol of sweeping away ill-fortune and welcoming in good luck.

Many families will also decorate by posting couplets of poems outside of their doors and putting up cut-outs of characters and pictures of the Zodiac animal of that year and of fish in windows and doors. In the case of characters, these are most commonly “good fortune” (福,fú) and “happiness” (喜,xǐ).

For fú (福) cut-outs, the character is often pasted upside down because the Chinese word for “upside down” has the same phonetic pronunciation as “is here;” so pasting “good fortune” upside down is like saying “Good fortune is here!”

Fish are often used as a good luck symbols since the character 馀 (yú) in the phrase 年年有馀 (nián nián yǒu yú), or “Wishing you great prosperity each and every year,” has the same phonetic sound as 鱼 (yú), or fish.

One of the most famous parts of Chinese New Year is the 12-year cycle of animals that it follows. The order is Rat, Ox, Tiger, Rabbit, Dragon, Snake, Horse, Sheep, Monkey, Cock, Dog, and Pig.

The Year of the Snake

In addition to the 12-year cycle of Zodiac animals, there is a 10-year cycle of elements: metal, wood, water, fire, and earth. These elements are also associated each year with a yin and a yang element, so a water year may be either a yang water year or a yin water year. Altogether, it takes 60 years to cycle back to the exact same Zodiac animal, element, and yin and yang combination.

People born in the Year of the Snake are said to be charming, cunning, proud, passionate, and wise. They are also said to be elegant and attractive with a passion for the better side of life. They have excellent business sense and people skills.

Water Snakes are said to be influential and insightful people with good organization and management skills. They are motivated, intelligent, and highly driven. They are affectionate and passionate to family, but reserved toward others.

A Time to Feast!

On eve of the Chinese New Year, called 除夕夜 (chú xī yè), families will gather with elders and relatives to have a feast. This is often a great time for the younger generation to enjoy grandmother’s amazing cooking.

Traditional food varies with location, but will often include a wide variety of meats including pork, duck, chicken, and beef, and a selection of delicious deserts.

This feast is a very important element of the New Year and allows the younger generation to pay respects to the elders since the dinner is traditionally held at the home of the oldest member of the elder generation.

During the Chinese New Year, families will visit each other and exchange gifts and money. Children are expected to respectfully greet their parents and elders on New Year’s day and receive as presents, red paper envelopes with money inside, called 紅包 (hóng bāo).

This is a tradition even the youngest children look forward to and siblings will often engage in light rivalry to see who receives the most money from their married relatives.

The first day of the New Year begins at midnight and is celebrated with fireworks, firecrackers, and lion dances in the streets. Since it is considered bad luck to use sharp knives or fire or to clean on New Year’s Day, the most traditional families will prepare all the food before New Year’s Day. It is the day for welcoming the Gods and paying respect to the elders.

The second day of the New Year, known as 開年 (kāi nián), or the Opening of the Year is when people travel to visit relatives who were unable to come to the New Year’s feast. Oftentimes, this is a chance for married women to visit their parents since, after marriage, women lived with their husband’s family and would spend New Year’s with their in-laws.

The third day, called 赤口 (chì kǒu), Red Mouth, or 赤狗日 (chì gǒu rì), Red Dog Day, celebrates the 熛怒之神 (biāo nù zhī shén), the God of Blazing Wrath. The day is for rest and it is unlucky to visit friends on this day, though some will visit temples and burn paper offerings to the God.

However, some stores do not open until the sixth day, with firecracker celebrations on the fifth day in preparation for the opening. Very traditional companies may not start work until the eighth day.

The seventh day of the New Year is known as 人日 (rén rì), or the people’s birthday. This is the day when everyone grows older. In the past, people did not celebrate individual birthdays. Instead, your age was determined by the year you were born and everyone born in that year grew a year older on 人日.

One of the most exciting days of the New Year is the last day, the 15th day, also known as

元宵節 (yuán xiāo jié), the Lantern Festival. 湯圓 (tāng yuán), a glutinous rice ball often filled with sweet, black sesame, is made in a soup and eaten on this day.

At night, children would come out with their families and walk the streets with lanterns. Though now most lanterns are store-bought and made of plastic with a light bulb inside, traditionally, they were colorful, paper constructions, with a candle burning inside, that people hung on a stick.

The 15th day marks the official end of the Chinese New Year, and festivities can last long into the night.