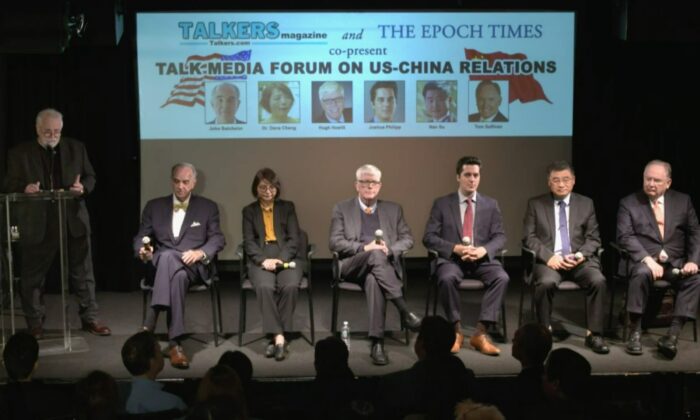 NEW YORK—In a wide-ranging conversation, top radio talk show hosts and senior Epoch Times staff provided context to an audience of media professionals about some of the most important headlines regarding China.

At an event held in midtown Manhattan on Oct. 1 by The Epoch Times and Talkers magazine, a trade publication on the talk radio industry, panelists discussed the ongoing U.S.–China trade dispute, challenges for the Beijing leadership, and the nature of the Chinese Communist Party’s rule.

John Batchelor, a talk show host on WABC in New York, said the trade war has highlighted how “China’s business model is broken.” As U.S. tariffs have prompted manufacturers to move production out of China, companies have realized that they can move their supply chains to other countries where labor is also cheap, without being subject to unfair trade practices.

“The Chinese miracle is over,” he said.

Tom Sullivan of Talk Media Network said he’s spoken with farmers and residents in the heartland states most affected by China’s retaliatory tariffs on U.S. agricultural products; they’ve said that while the tariffs have hurt their businesses, they support President Donald Trump tackling the Chinese regime’s trade policies.

The panelists also discussed the increasingly adversarial relationship between the United States and the Chinese regime in other areas.

In the White House National Security Strategy released in December 2017, Trump said the United States was in a “great power competition” with China and Russia, as the two seek to “shape a world antithetical to U.S. values and interests.”

That marked a new phase in the U.S.–China relationship. About a year later, Vice President Mike Pence highlighted the Chinese regime’s “whole-of-government” approach to undermining U.S. interests politically, economically, and militarily in a speech at the Hudson Institute think tank.

Epoch Times senior investigative reporter Joshua Philipp explained the different nonmilitary means by which the Chinese regime has waged war on the United States, including by the manufacture of fentanyl, which has fueled the U.S. opioid crisis, launching cyberattacks to steal intellectual property, and persuading Chinese–American community organizations to support the Communist Party’s agenda.

He also warned that the Chinese regime was seeking to export its authoritarian model of high-tech surveillance via investments in massive infrastructure projects throughout Latin America, Africa, and Europe.

Hugh Hewitt, a talk show host and president of the Richard Nixon Foundation, said that while U.S. foreign policy has to come to terms with Beijing’s increasing economic competition with the United States, it should also be focused on how to “prevent collision” between the two global superpowers.

As the day coincided with the Chinese regime’s 70th founding anniversary, the media professionals remarked about the Party’s current instability—as exemplified by ongoing protests in Hong Kong against Beijing’s encroachment on the city’s autonomy.

Dana Cheng, The Epoch Times’ senior editor of China news, explained the history of the former British colony as a place of refuge for mainland Chinese escaping persecution from the Chinese regime’s political campaigns.

The territory returned to Chinese rule in 1997 under an agreement in which the Chinese regime promised to preserve the city’s autonomy and freedoms not afforded in the mainland.

She said it was a key reason why many Hongkongers feel the controversial extradition bill that sparked the current protest movement represented “the last firewall” between China and Hong Kong.

Epoch Times reporter Nathan Su added that Hongkongers are fighting for what they believe are their “inalienable rights” to freedom. In this way, he said, their cause is synonymous with those of America’s Founding Fathers.