A Day in the Life of a Chinese Emperor
0 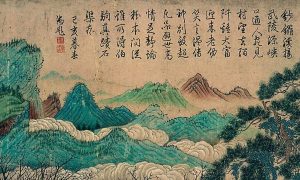 A depiction of Tang Dynasty empress Zhangsun and her husband, Taizong.
China

Throughout China’s long history, many dynasties were established by men of strength and ambition. Yet the wise and virtuous women who stood alongside them were no less instrumental in shaping the character and heritage of Chinese civilization.

Classical Chinese culture values women who apply their intellect and wisdom to assist fathers, husbands, and sons in their judgement and conduct.

In the “Thousand Character Classic,” an educational text, there is the line, “Outside, accept the teachings of your master; at home, honor your mother’s principles.”

Wisdom, represented by the Chinese character “zhi,” is the fourth of five cardinal virtues taught in Confucianism, the others being benevolence, righteousness, propriety, and faith. In the following three stories the Chinese empresses are known for their contributions to the Han and Tang dynasties.

Besides his proper wife Yin Liuha, Emperor Guangwu of the Eastern Han Dynasty also had a wealthy imperial consort, Guo Shengtong, who had bore him a son. This led to an awkward situation in which the emperor favored Yin Lihua, but was under pressure to choose Guo Shengtong out of pragmatism.

Yin Lihua was a woman from eastern China descended from the famed minister Guan Zhong. Praising her as a “mother role model of beauty,” Guangwu offered Yin the position of empress.

Guangwu could not shake his feelings for his first wife. When the emperor tried confer noble titles on Yin’s brothers, she refused, saying that it would be improper nepotism. When he tried to reward her with expensive jewelry, Yin pointed out that such extravagance was hardly appropriate given that the empire had hardly stabilized after years of warfare.

Knowing that Guangwu was still in love with Yin, Guo Shengtong was jealous and slandered her repeatedly. After 17 years of marriage, the emperor tired of Guo and stripped her of imperial status.

Though Yin Lihua became the new empress, she did not harbor grudges against Guo or her family. She commanded her sons and grandchildren to treat the deposed empress as their own mother and grandmother. A notable instance of this was when Emperor Ming, Yin’s son and the successor to Guangwu, attended the funeral of Liu Jiang, who was Guangwu’s firstborn son by Guo. As a result of Yin’s virtue, the rest of Han Dynasty history was not disgraced by violence among the royalty.

Another Han Dynasty empress, Mingde, was the daughter-in-law of the aforementioned Empress Yin and the wife of Emperor Ming. She is known for responsibly using her imperial authority to ensure smooth succession between emperors, earning her the appraisal as a model for all women and empresses at home and in court.

Emperor Ming valued Mingde’s opinions and frequently asked her thoughts on political matters. Despite the great leverage she held over her husband, Mingde restricted herself to the role of adviser and never used her charm to benefit her own household.

Finally, Emperor Ming passed away and was replaced by Emperor Zhang. Because Zhang was still a child, Empress Mingde filled in for him.

In Chinese history, it was not uncommon for the empress-dowager to seize power for herself and rule from behind the scenes with the help of male royalty. Empress Mingde knew the chaotic results that would come of this, and strictly forbade any other royalty to touch power or influence the young emperor.

As an example, there was much pressure on Emperor Zhang to grant his uncles royal titles. Empress-Dowager Mingde resolutely stood her ground against these requests until she was ready to pass full imperial authority to Zhang. His reign was thus stable and successful.

The emperor Taizong is considered one of the greatest rulers in Chinese history. Born Li Shimin, he founded the 300-year-long Tang Dynasty (618–907), known as one of the pinnacles of Chinese culture, civilization, and imperial strength.

But it was Taizong’s wife, Empress Zhangsun, whose timely advice and interventions streamlined this great man’s achievements.

Zhangsun, the daughter of a Sui Dynasty general who grew up in an official’s family, was uncommon in that she had received a formal classical education normally reserved for boys.

Although Zhangsun grew up in a rich family, she set a good example of the nobility by living frugally. Her tolerant and compassionate nature fostered a good atmosphere at court, which enabled Emperor Taizong to focus on his imperial policy.

The empress was of the belief that men and women occupy complementary roles and it was not her place to dominate his political responsibilities. But when it came to giving her husband course corrections, Zhangsun knew when and how to act.

One early Tang Dynasty official, Wei Zheng, was well-known for his honest but blunt criticism. Because of his brave integrity, he did not hold back even in front of Taizong himself.

While the emperor acknowledged Wei as “a loyal official with good advice,” sometimes his temper would get the better of him.

Taizong once planned a hunt in springtime and gathered many people before his palace to prepare for the occasion. Upon learning this, Wei Zheng hurried to the scene in protest—spring was a time of growth and replenishment, and hunting at this time would damage the ecosystem.

His hunt ruined, a vexed Taizong returned to his chambers, where he encountered the empress. Venting his anger, he declared that he would kill Wei Zheng for his insolence.

Instead of commenting immediately, Zhangsun retreated to her dressing room. Taizong’s rage turned to surprise when his wife reappeared in her imperial regalia. Bowing, she said: “I have heard that only a most capable emperor will have subordinates with integrity. Minister Wei shows so much integrity because you are an emperor who has ability. I congratulate you.”

Taizong immediately recognized the folly of his attitude and silently forgave Wei’s actions.

Zhangsun’s attitude was one of healthy consideration and caution. “Even when in peace, think of danger; choose honest and capable officials and heed their opinions. That’s all I know as your wife and nothing else.”