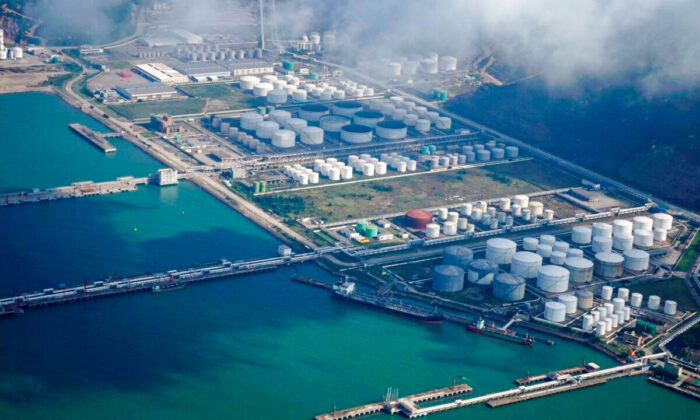 Oil and gas tanks are seen at an oil warehouse at a port in Zhuhai, China, on Oct. 22, 2018. (Aly Song/Reuters)
China Business & Economy

Oil prices depend on China, Iran, and Ukraine
By Antonio Graceffo

The global oil price outlook depends on the Chinese economy, the Iran nuclear deal, and the war in Ukraine.

On Aug. 15, world oil prices dropped due to speculation that declining industrial output in China would reduce global demand. China’s economy has been trending downward most of this year, which is pressuring world oil prices to drop, even as the Russian war in Ukraine is pushing prices up.

China—already suffering from a debt crisis, real estate crisis, and reduced industrial activity caused by ongoing COVID-19 lockdowns—is also facing water shortages and an energy crisis as the summer heat has caused a drought. Water levels in rivers have dropped to near record levels, reducing hydroelectric output that has resulted in factory slowdowns and closures. At the same time, increases in the price of oil and natural gas have left Chinese gas companies struggling to earn a profit. Consequently, China’s green agenda may be put on hold, with gas project construction halted due to a lack of profitability.

In June, gasoline prices in China reached record highs while global oil prices peaked. Global oil prices came down in July, when it appeared that Iran might be readmitted to global markets and that U.S. rate hikes might suppress demand for oil. Iran’s ability to export oil depends on reaching a nuclear deal with U.S. and European officials. So far, no deal has been reached, but speculation kept oil futures and stock prices low. Prices remained low until Aug. 26, when Saudi Arabia announced that OPEC might reduce output again.

The International Energy Agency (IEA) attributes the recent decrease in oil prices to rising oil supplies and escalating concerns over an economic slowdown. The respite is expected to be temporary; however, as the prices of natural gas and electricity have been rising steadily, both China and Europe have gone back to oil as a means of energy production. Consequently, IEA projections are for increased global demand for oil irrespective of fluctuations in the Chinese economy. For 2022, IEA expects oil prices to remain at $105 per barrel and decrease to $95 in 2023.

Any projections about the future of oil and gas prices should be taken with caution, however. The entire global market situation could change in response to a surge or a decline in demand in China; the attainment of an Iran nuclear deal, which would increase world supply; or if the Russians decide to shut off pipelines to Europe and India.

If a troubled economy would dampen oil demand in China, then that piece of the puzzle is likely to remain. In late August, Beijing released its 19-point plan to rescue the economy. About $146 billion in funding for infrastructure improvements, increased rice production, mitigation of power shortages, and drought relief was budgeted for this plan. However, foreign analysts are skeptical as the latest 19-point plan comes after Beijing’s 33-measure plan failed to increase investment and consumption back in May.

The Chinese Communist Party (CCP) has also increased the amount of bonds that local governments are allowed to issue, bringing the total for this year to $511 billion. This money is meant to be invested in roads, railways, airports, affordable housing, and energy projects. The loan allowance for state development banks has been increased to more than $200 billion for infrastructure projects, and the central bank will allocate $1.5 billion from reserves to fund drought relief.

The International Monetary Fund has downgraded projections for China’s gross domestic product (GDP) growth to 3.3 percent, while international investment banks are even more pessimistic. Goldman Sachs and Nomura have cut China’s GDP growth forecasts for 2022 to 3 percent or less. They remain unmoved by the CCP’s latest announcement of a plan to save the economy. The 33-measures and 19-points are seen as simply too small to buoy such a massive economy, particularly when COVID-19 measures remain in place.

The drop in cement and steel production in July is a leading indicator of China’s economic downturn. According to S&P Global Ratings, about 40 percent of China’s property developers are in financial trouble. Dan Wang, chief economist at Hang Seng Bank, estimated that power shortages could cost China 0.6 percentage points of its economy, driving GDP growth to less than 3 percent.

The economic outlook for China seems grim, while projections for world oil prices remain ambiguous. China’s demand may remain low, but the directions of the Iran nuclear deal and the war in Ukraine are uncertain for now.