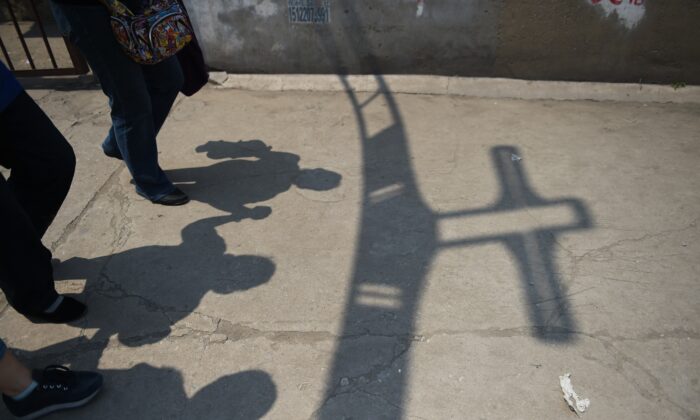 Worshippers walk past the shadow of a cross at the entrance to the "underground" Zhongxin Bridge Catholic Church, after a service celebrating the Feast of the Ascension in Tianjin, on May 24, 2015. (Greg Baker/AFP via Getty Images)
Viewpoints 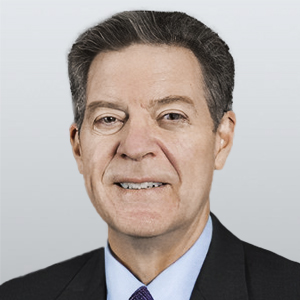 Boston Celtics center Enes Kanter’s recent criticism of the Chinese Communist Party’s genocide against Uyghurs and persecution of the Tibetan people shone a critical spotlight on communist China’s human rights and religious freedom abuses. Considering the backlash that was faced by Houston Rockets General Manager Daryl Morey after voicing support for the Hong Kong protesters defending their freedom, Kanter’s defiance of the Chinese Communist Party was a bold and brave move.

But as more horrific truths about the Chinese Communist Party’s persecution of religious and ethnic minorities are exposed and criticism of communist China’s oppression gains momentum, we must not overlook the brutality that is being inflicted on China’s largest religious minority: Christians.

Christianity has significantly grown in China since the Communists seized power in 1949. What began as a population of less than half of a million Chinese Christians has since expanded to as many as 130 million followers of Jesus Christ in China.

As former Vice President Pence said in remarks to the 2nd Annual Religious Freedom Ministerial on July 18, 2019, “In one of the greatest ironies in the history of Christianity, in today’s Communist China, we actually see the fastest growth in the Christian faith that we have ever seen anywhere on Earth in the last 2,000 years.”

But the marginal toleration of Christianity that existed in China for decades has since been destroyed by General Secretary Xi Jinping as the Party’s abuse against Christians reaches its highest level since the Cultural Revolution.

Catholicism and Protestantism are two of China’s five officially recognized religions. However, both state-sanctioned Christian churches and underground churches, have been targeted by the Chinese Communist Party’s increasing crackdown.

The influence of Christianity in China is deeply feared by the atheist CCP. According to state media, Christianity is seen as a “foreign religion” that has “long been controlled and utilized by colonialists and imperialists.”

The free practice of Christianity, from the perspective of Party leaders, undermines the absolute authority of the Chinese Communist Party. The dictatorship has witnessed the role that faith played in the fall of communism during the Cold War, namely through the resilient leadership of Saint John Paul II.

General Secretary Xi Jinping is determined to ensure that Christian worshipers do not undermine the Party’s power. The CCP has thus waged an oppressive campaign to “sinicize” religion and eliminate religious freedom.

Thousands of churches, both state-sanctioned and underground places of worship, have been shuttered since 2018. In Shangrao, located in Jiangxi Province, approximately 400 Protestant churches were destroyed, shut down, or repurposed last year alone. In state-sanctioned churches, crosses and images of religious figures have been removed and, in some cases, been replaced with pictures of General Secretary Xi. In other instances, depictions of the Ten Commandments have been removed and replaced with sayings from Xi.

New regulations for religious personnel that mandate allegiance to the Party have been put into effect as well. For example, the 52 administrative rules that went into force on May 1, 2021 require that those serving in a religious function, “love the motherland, support the leadership of the Chinese Communist Party, support the socialist system, [and] respect the Constitution, laws, regulations and rules.”

Defying the Party’s demands and worshipping outside of China’s controlled institutions puts Christians at risk of retribution. As many as 10,000 Christian churchgoers have been arrested as well as pastors, bishops, priests, seminarians, and nuns. A group of 12 U.N. human-rights experts concluded that some Christian detainees have been victims of organ harvesting. Moreover, according to an April 2021 report by Radio Free Asia, Christians have been imprisoned in “transformation” facilities aimed at forcing a renunciation of their faith. A former inmate of these secret prisons, which are overseen by the CCP’s United Front Work Department, was a member of an underground Christian church. He said that during his nearly 10-month detention he was captive in a windowless room, was beaten, verbally abused, and “mentally tortured.”

Online Bible sales are banned in China and are only permitted to be sold in state-approved church bookstores. Christians have also been put on trial for selling audio versions of the Bible. Paradoxically, even though China is the largest printer of Bibles in the world, and is a dominate source of U.S. supply, it is difficult to get a copy as a Christian in China. Additionally, the Chinese Communist Party has expressed its intent to retranslate and publish its own versions of the Bible and other holy texts that abide by the tenets of socialism with Chinese characteristics.

The widespread religious persecution and elimination of religious freedom at the hands General Secretary Xi Jinping and the CCP are of serious concern. It is clear that the Party’s targeting of Christians needs to be emphasized in the mainstream conversation about communist China’s escalating crackdown on religious minorities.

Advancing and defending religious freedom is at the heart of American foreign policy. The United States must hold the Chinese Communist Party accountable for robbing the Chinese people of this fundamental freedom.

Sam Brownback
Follow
Sam Brownback was the U.S. ambassador-at-large for International Religious Freedom from 2018 to 2021. He previously served as governor of Kansas, a U.S. senator, and a member of the U.S. House of Representatives.