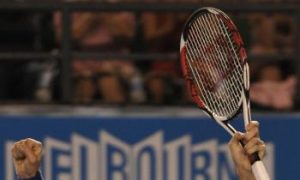 Federer Gets Ideal Prep for U.S. Open in Cincy
0

Chinese police and CCP agents have killed thousands of Falun Gong practitioners through beatings and torture since 1999. The response has been peaceful protest. (Minghui.org)
China

The Four Worst Political Movements of The Chinese Communist Party

Following is a summary of four of the most brutal revolutions and persecutions spanning the 60 years since the Chinese Communist Party seized power.

The Great Leap Forward was a campaign by the CCP that required everyone in China to become involved in steel-making, forcing farmers to leave their crops. It was a major economic disaster that led to the Great Famine, a nationwide famine that cost more than 40 million lives, and was explained officially as a “Three-Year Natural Disaster.”

Mr. Jiang, from Xie County, Shanxi Province, said: “Many small villages were wiped out where the farmers’ whole family starved to death,” he said. “People ate anything. There were deaths in every family. Dead bodies were everywhere. Finally, people started eating humans, including living ones and relatives.”

When the peasants were so hungry as to snatch cereals from the grain depots, the Communist Party ordered shooting at the crowd to suppress the looting and labeled those killed as “counter-revolutionary elements.”

The Cultural Revolution was the most frenzied leftist period in China. Killing became a competitive way to exhibit one’s revolutionary standing, so the slaughter of “class enemies” was extremely cruel and brutal. Mao’s aim was to recapture power after the failure of the “Great Leap Forward.” It was an unprecedented nationwide exercise of eliminating human nature.

Zhang Zhixin was an intellectual who was tortured to death by the CCP during the Great Cultural Revolution for criticizing Mao’s failure in the Great Leap Forward and being outspoken in telling the truth.

Prison guards stripped off her clothes many times, handcuffed her hands to her back and threw her into male prison cells to let male prisoners gang rape her until she became insane. The prison feared she would shout slogans to protest when she was being executed, so they sliced open her throat before her execution.

The CCP fired at students in Tiananmen Square on June 4, 1989 in response to the democratic demands following the Cultural Revolution.

This was the first time that the CCP army killed civilians publicly in order to suppress the people’s protest of embezzlement, corruption and collusion between government officials and businessmen, and their demand for the freedoms of press, speech, and assembly.

During the Tiananmen massacre, in order to instigate hatred between the army and civilians, the CCP even staged scenes of people burning military vehicles and killing soldiers, stage-managing the tragedy of the People’s Army massacring its people.

The persecution of Falun Gong, a popular spiritual discipline in China, began in July of 1999 and continues to this day. Jiang Zemin gave three orders to persecute Falun Gong practitioners: “ruin their reputations, bankrupt them financially, destroy them physically.”

Practitioners have been tortured and beaten to death, put into mental hospitals, and raped. Many have been executed while their organs are seized and sold in the open market. Tens of thousands who refused to give their names are suspected to have been killed this way.

Falun Gong practitioner Gao Rongrong was taken by police and imprisoned in a labor camp. On May 7, 2004, she was tortured with electric batons for seven hours straight. The torture seared the skin off her face, head, and neck, and she sustained severe, disfiguring burns. Her once-radiant face was left scarred with blisters and her hair was matted with pus and blood. She escaped, but was captured and then tortured to death in March 2005, at the age of 37.