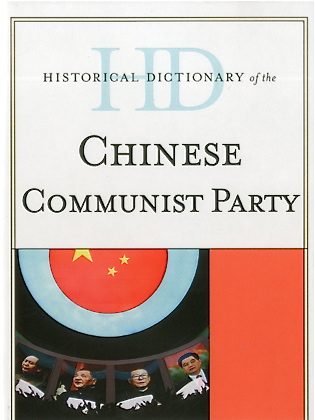 Ever wondered what the “dictatorship of the proletariat” really means? What about that “February adverse current” you’d never heard about? These abstruse definitions and many, many more now complete a historical dictionary of the world’s largest and longest lasting Leninist political organization, the Chinese Communist Party.

With more than 400 entries (cross-referenced in bold), an introduction, appendices, and bibliography, the new volume by Scarecrow Press will be useful indeed.

Pick any Party organ, apparatchik, event, or watchword. The Organization Department, for example. You learn that it controls high-level staffing positions within the CCP (well, the one in the Central Committee, which is the focus of the entry; though Organization Departments exist at every level of the Party’s administrative structure), that it was founded in the Yan’an era to manage the influx of cadres, and lies on the outskirts of Beijing in an unmarked building with no listed phone number.

It “forms the institutional core of the Leninist Party system.” You learn that the selection of appointments is often heavily influenced by bribery and patronage, and that being the head of an Organization Department is a highly sought after position. A list of holders of the chief office concludes the entry. Readers are directed to related entries on “cadres” and “rectification campaign.”

The introduction by Lawrence Sullivan provides a fair summary of CCP doctrine and shifts in its rule, bringing it up to Xi Jinping’s likely succession. But it delves little into the lies and general ruthlessness and brutality with which the CCP rules China, and suggests that the Party will probably stay in power for decades while failing to highlight any of the looming economic, social, or demographic factors that may complicate matters.

One puzzles over what guided decisions for inclusion or exclusion. The anti-spiritual pollution campaign of 1983–84 is included, for example—as it should have been—but there is no entry for the anti-Falun Gong campaign, which is ongoing and was much more thorough and destructive than the former.

There is an entry on the Central Propaganda Department, but not one on propaganda or use of the media for promoting the Party’s line generally.

There’s no entry on culture. Other broad concepts like democracy are given an entry. But there is no entry for, say, coercion, a concept that is much more tangible, and a more important instrument than democracy in the Party’s arsenal.

Some people’s birthdates are entered as question marks. How hard would it have been to Google the name of Wu Guoguang and enter his year of birth (1957), or pick up the phone and confirm it?

The omissions don’t seem to be deliberate attempts to burnish the CCP’s reputation. The entry on “thought reform” explains that “interrogations, the writing of ‘confessions,’ incarceration, and even torture were all used to remold the ‘thoughts’ of intellectuals who did not support the CCP nor accept the worldview embodied in Marxism-Leninism-Mao Zedong Thought.'”

But there is no comparable entry on the system of re-education through forced labor; or the use of psychiatric institutions to persecute dissidents; or the whole security apparatus of coercion and repression generally.

One imagines that all this, which is deeply significant for the meaning of CCP rule and the people on the ground that must contend with it, could have been put under “public security” and given a few paltry pages. There is no entry on the one-child policy. And neither is there a list, at the beginning, of all the entries that are to follow. One must thumb through every page.