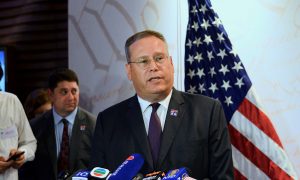 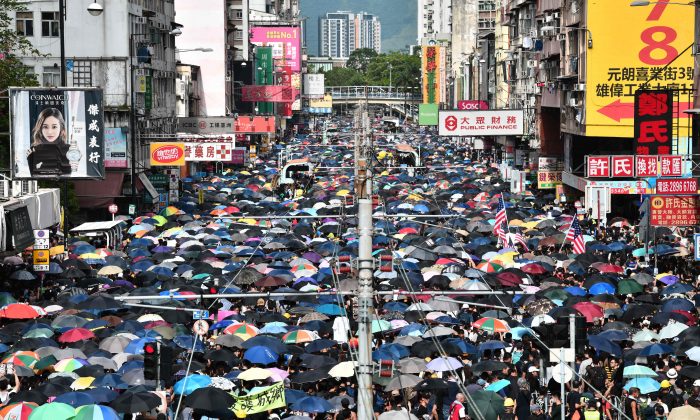 Protesters demonstrate in the district of Yuen Long in Hong Kong on July 27, 2019. Crowds of Hong Kong protesters defied a police ban and began gathering in a town close to the Chinese border to rally against suspected triad gangs who beat up pro-democracy demonstrators there. (Anthony Wallace/AFP/Getty Images)
Thinking About China

Mark Twain said, “To a man with a hammer, everything looks like a nail.” The tool a person has to solve problems determines that person’s perspective and choice of solution.

Beijing’s problem now is that it’s holding a hammer, only to find that Hong Kong is not the nail the regime thought it was.

The Chinese communist regime’s hammer is a dictatorial tool under an autocratic system. Forging such a tool requires a variety of conditions.

Second, the regime needs to subject people to long-term terrorist training in this environment. These conditions are formed at the same time as the authoritarian political tools. It requires a “forging” process that takes gradual implementation and accumulation.

Let’s borrow the concept from Daniel Kahneman’s book “Thinking, Fast and Slow.” When “system 2” in the brain completes the calculation, statistics, and logic process, “system 1” takes over and proceeds with energy-saving automatic operation.

After the Chinese Communist Party (CCP) formed its dictatorship tools, the regime then entered an automatic mechanism for its judgment and handling of issues. It normally doesn’t distinguish differences between specific problems but simplifies the classification to find the so-called “best solution.”

The hammer of dictatorship can only be used effectively under authoritarian conditions, something not fully formed in Hong Kong. If the CCP wants to use autocracy in Hong Kong, it must establish authoritarian system conditions over a long period of time, which would likely be quite bloody.

This is exactly what the CCP and its agents are imposing on Hong Kong.

Humanity’s development over thousands of years has led to the principles of freedom, openness, equality, and tolerance. When we talk about a modern social system, openness, prosperity, tolerance, and freedom are a must-have, even if we omit democracy, rule of law, and so on.

The modern civilized system has these attributes in general. With the absence of complete democracy, Hong Kong is still a social system with characteristics of a modern civilization. This drives the fact that when Beijing waves its hammer, it doesn’t achieve the same effect as in mainland China. Sometimes the opposite outcome ensues.