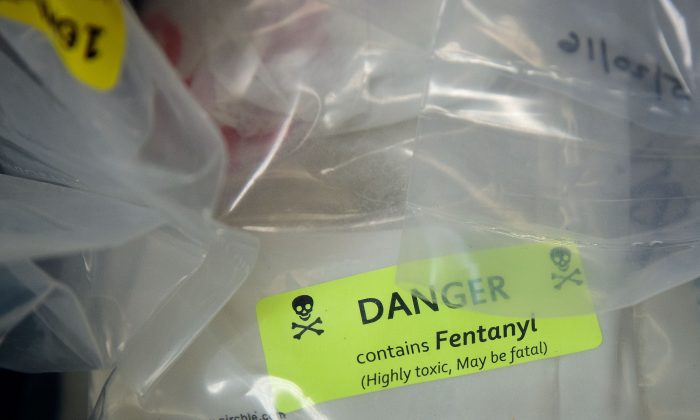 Bags of heroin, some laced with fentanyl, are displayed before a press conference regarding a major drug bust in New York City on Sept. 23, 2016. (Drew Angerer/Getty Images)
Viewpoints

During the Vietnam War, 15 percent of U.S. servicemen became addicted to heroin, which extrapolates to well over 100,000 Americans. It was truly catastrophic.

If there were ever a time for America to face up to the drug problem, in a deeply honest way, this was it.

Gen. Lewis Walt—a highly decorated four-star Marine general who had served in World War II, Korea, and Vietnam—warned in compelling congressional testimony in 1972 that Americans had a drug problem because communists wanted Americans to have a drug problem.

Walt explained that the heroin flooding Vietnam wasn’t from ordinary street criminals, because it was over 90 percent pure. And it wasn’t profit-driven, because the Chinese were selling the heroin for a loss. He concluded, quite logically, the drugs were political in nature and “bound to have a demoralizing, long-term impact on American society.”

However, Walt’s revelations were politically inconvenient. President Richard Nixon had just gone on his celebrated trip to Beijing, palled around with Chairman Mao, and informed Americans that we were to be allies with China.

But how could we build a relationship with a country that was purposefully killing Americans in one of the most despicable ways possible? A serious problem for ordinary folks, but, apparently, not for Nixon. He ignored Walt’s testimony.

In fact, the American establishment actively suppressed knowledge of what China was up to. In one example of many in this tragic history of betrayal, when the CIA drew a triangle on a map indicating that China was a prime supplier of drugs, the Nixon White House simply moved the triangle off China.

Every presidential administration since has continued Nixon’s policy of turning a blind eye to Beijing’s nefarious machinations and, all the while, binding the United States and China closer together.

But while President Donald Trump is finally putting an end to that, so much damage has already been done. The opioid problem facing America has become a crisis.

Scott Adams, the creator of the “Dilbert” comic strip, took to Periscope in a video, dated Oct. 1, in which he fought off tears to say that his 18-year-old stepson had just died of an apparent fentanyl overdose, from a fentanyl patch and possibly counterfeit Xanax mixed with more fentanyl.

An extraordinary 68 percent of all the fentanyl in the world originates in China, according to the Defense Intelligence Agency.

It’s likely that Adams’s deceased stepson was directly killed by Chinese fentanyl, or he died because of the Chinese fentanyl that had already created and fed his addiction.

It’s been about 50 years since Nixon gave his famous speech declaring drug abuse to be America’s “public enemy No. 1.”  Since then, America’s drug problem has become an order of magnitude worse.

In 2017, about 30,000 U.S. drug overdose deaths were related to fentanyl and synthetic opioids. America’s drug policy has been a staggering failure, even by The Swamp’s incredibly low standards.

Of course, if Walt was right, and China’s plan was to kill Americans with drugs, and they continued that policy, as we built closer ties with them, this is exactly the result you’d expect to see.

Joseph Douglass Jr.’s seminal book, “Red Cocaine,” which takes a courageous look at the drug problem, elaborates on Walt’s 1972 testimony. It’s required reading for anyone who wants to get serious about the problem.

Douglass explained that China’s use of heroin during the Vietnam War and the Chinese fentanyl flooding America today aren’t isolated incidents. They are part of a continuing plan in which China uses drugs as a strategic weapon to weaken enemies (Douglass also writes extensively about Moscow’s participation in this same plan).

He traced this plan’s origins back to 1928, when Mao began distributing opium to destroy domestic non-communists. When Mao took over China in 1949, he expanded operations to Japan. A top Soviet ideologist later observed that China’s strategy was “to disarm the capitalists with the things they like to taste [meaning drugs].”

To avoid provoking the United States, Beijing took rudimentary steps to mask their actions. They would often work through proxies such as in Mexico. In addition, Chinese Communist Party (CCP) agents would never identify as such, but rather as mafia, oligarchs, or businessmen, to create the illusion that they were rogue entities.

China’s deception has been sufficient for people who want to be fooled. But the truth is there for anyone with the will to see it.

China is currently setting up the “world’s biggest camera surveillance network,” alongside a “trustworthiness” score for each of its citizens. George Orwell’s “1984” now exists in reality. Does anyone truly think that Chinese people in China would be manufacturing and distributing unprecedented amounts of fentanyl if the CCP didn’t want that to happen?

The CCP is responsible for so many fentanyl deaths, it’s like the entire Vietnam War is happening inside of the United States, every single year.

The president is entirely right to place tariffs on China. It’s true, from a short-term economic perspective, that tariffs are a bad idea: the pricing on our trinkets and baubles will rise. But there’s more to life, for those of us alive, than cheap toys.