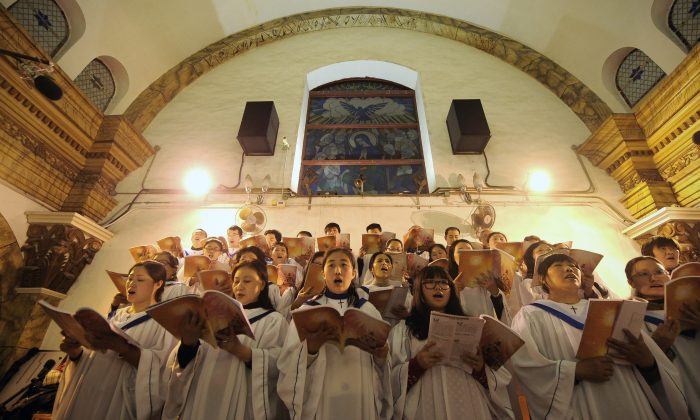 The Chinese Communist Party Is Worried; Officials Are Becoming Religious

Though the Chinese Communist Party is officially atheist, it has always maintained five state-sanctioned religions, which it uses to buttress its own rule over the Chinese people. General secretary Xi Jinping reiterated this point at a May 21 political meeting, saying that religion must instead be used to guide the hearts and minds of the public in favor of Party doctrine.

A major concern in recent years, however, has been the growing religiosity among communist officials themselves. While the Party may tolerate the existence of religions, its own officials are barred from believing in them. Economic crime is the main component the “disciplinary violations” that have been widely applied to Chinese officials facing investigation and ousting from their posts, but belief in “superstitions” is also grounds for incrimination in the Party’s cleansing of the ranks.

On May 21, the municipal government of Wenzhou in Zhejiang Province reported recent findings of the local Party inspection team. The report mentions a new round of efforts intended to address the problem of low-level officials taking up religious faith or of officials who have lost their faith in the Party, sense of “Party nature,” or qualification for being a Party member.

Zhejiang Province, located on the southeast Chinese coast, has a large Christian population and has received the nickname of “China’s Jerusalem.” Earlier this year, Communist authorities removed the crosses from about 400 churches to reduce the religion’s visibility.

Last September, a team dispatched to Zhejiang by the central Party agency in charge of disciplinary and anti-corruption inspection finished its two-month operation, Shanghai-based new website Guncha Net reported on May 22. Regarding the matter of religious beliefs among local officialdom—apparently so widespread that some officials even took part in group religious activity, the inspection team suggested that Party officials be further indoctrinated in communist ideology, especially at the local level, in order to safeguard the Party’s “advanced nature and purity.”

According to Xia Ming, a professor of political science at the City University of New York, the Party’s efforts to uproot faith are unlikely to succeed, as it would simply turn officials into closet believers, Radio Free Asia (RFA) reported.

“Many high-ranking Party officials and their relatives are in fact Buddhists and Christians, yet they know how to put on a show [to conceal their faith in public]. In brief, this new round of inspections can achieve nothing, and it only shows that the Chinese Communist Party is losing its spiritual control over the people,” Xia told RFA.

Why Does the Communist Party Fear Religion?

According a Chinese state-run site, “some Party leaders … are passionate in worshiping Gods and Buddhas, spearheading what is feudalistic superstition. This trend, if unstopped, would have a serious consequence, befuddling the minds of Party officials and collapsing the Party organization.”

Zan Aizong, a Christian freelance writer and active blogger and microblog user in China speaking to RFA, said general secretary Xi Jinping’s remarks are meant to disassociate Western and Chinese religions from their spiritual common ground, and to cement the role of the Party as custodian of all things Chinese.

“The fact is that there isn’t any national border within religions. Whether it is Christianity or Buddhism, they exist both inside and outside of China,” Zan said. “What role can the Communist Party, which believes in atheism, possibly play? The Chinese government should only worry about its own government and protect religious freedom as guaranteed by the constitution,” he continued.

“Any religion group or social group not under the total control, guidance and manipulation of the Party is considered a threat to the stability of both the Party and society. Any such group can pose appear as a challenge to its autocratic system,” Fu said. “I think the Communist Party’s attitude towards religion is the projection of its own insecurities in its ability to govern.”