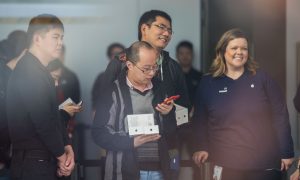 In Latest Move to Gain Global Edge, China Attempts to Lure Foreigners in Science and Tech With New Visa Program
0 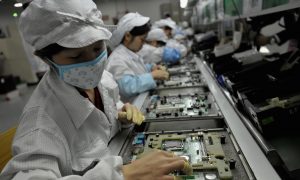 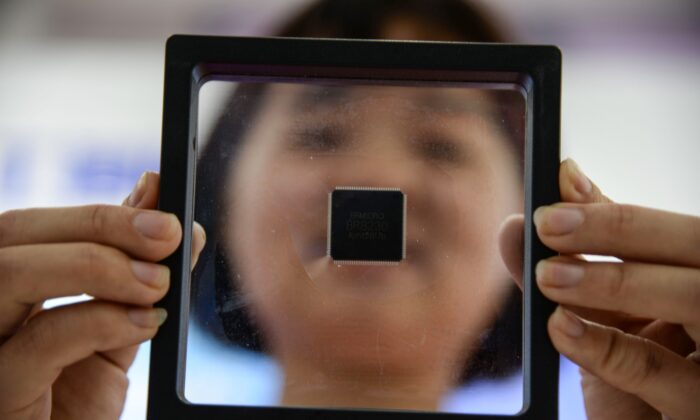 A Chinese employee holds a self-developed chip at a industrial park in Jinan in China's eastern Shandong Province, on May 11, 2019. (STR/AFP via Getty Images)
Thinking About China

The Chinese Academy of Sciences Pledges to Develop Core Technologies—Is This a Joke?

At a press conference held by China’s State Council Information Office on Sept. 16, Bai Chunli, the president of the Chinese Academy of Sciences (CAS), stated that in dealing with pressure from high-tech companies from the United States, CAS will strengthen its research on supercomputing systems and key materials in the next 10 years to help solve critical problems in these areas. But this sounds like a joke, as CAS is surrounded by scandals, driven by politics, and controlled by the Chinese regime.

Bai’s statement coincides with the strictest ban by the United States of supplying chips to Huawei. As such, the CAS statement can be interpreted in two ways: first, the Chinese Communist Party (CCP) cannot rid itself of its dependence on Western core technology; second, Chinese scientists have put their political opportunistic nature on display.

CAS has always been regarded as the highest level institution of science and technology in mainland China. It has four nationally ranking laboratories, 85 key laboratories, and 153 core stations throughout China.

However, the state-run CAS has recently been involved with many scandals. In June of this year, more than 90 scientists holding Ph.D. and M.S. degrees resigned from the Institute of Nuclear Energy Safety Technology (INEST) in the CAS Hefei Institutes of Physical Science (CASHIPS). Then the CCP’s State Council sent a special working group to CASHIPS, led by Vice Premier Liu He, to investigate the incident. But after more than 50 days of investigation, CAS had only handled the situation internally, in a low-key manner, and the director involved is still in his original post, Chinese media The Paper reported on Sept. 3.

In July, a sixth-grader from Yunnan Province won the third prize at the 34th China Adolescents Science and Technology Innovation Contest for his research on cancer. Later, it was exposed that the boy’s parents are researchers at the Kunming Institute of Zoology of CAS, and it’s believed that the student’s research was done with the help of his parents.

On July 3, Fu Xiangdong, a professor of cellular and molecular medicine at the University of California, San Diego, reportedly accused Yang Hui, a researcher at the Institute of Neuroscience of CAS, of academic plagiarism. Yang has also been selected by China’s Thousand Talent Program for youths.

In March, Xu Yufen, an engineer from the South China Sea Institute of Oceanography of CAS, was banned from conducting research because of her plagiarism in an environmental study report on the phase I project of Shenzhen Bay channel dredging.

In January, the Institute of Computing Technology of CAS claimed that it developed its own programming language called “Mulan.” But netizens revealed that some of Mulan’s features were the same as Python’s, a high-level programming language that was released in 1991. Mulan’s developer was suspended by the institute.

Scientific research should be established on the basis of objectivity and facts and include the best research fellows in the fields of science. However, under the leadership of the CCP, political motivation has created all kinds of problems, beginning with the selection of researchers.

For example, take the academic system, which represents a country’s level of science and culture. Members of CAS, being the top elite in China’s scientific community, should also uphold outstanding scientific and independent judgment and should therefore receive widespread respect in society. However, Chinese scientists and CAS are often humiliated by the CCP in order to serve certain political objectives, and CAS is also suffering from a declining reputation due to the various misconduct of its members.

In September 2013, Zhang Shuguang, the purged former high-speed rail chief, stated during a court trial into his corruption that 23 million yuan ($3.4 million) of the more than 40 million yuan ($5.9 million) he had collected from bribes was used in the evaluation process of applying for membership in CAS (bribing members of CAS to vote for him). CAS immediately responded that Zhang was recommended by the Ministry of Railways in 2007 and 2009, but he was not selected, and during his candidacy, CAS did not receive any complaints regarding “bribes” from Zhang.

However, according to Zhang’s confession in court, he was “only one vote short” in being voted in as a CAS member in the 2009 vote. According to investigations, in 2009, there were 110 members in the Department of Technology and Science of CAS, and 78 of them had voting rights. Zhang received 51 votes.

In the history of CAS, He Zuoxiu is a well known example of an academician with highly questionable academic achievement. His proposal of “using an atomic bomb to blow up the Himalayas and divert water northward” and his claim that the “Three Represents”—a guiding socio-political theory by former CCP leader Jiang Zemin—“is in accordance with the principles of quantum mechanics,” have won him the bogus title “CCP Party Secretary in Physics.”

On Jan. 31, state media People’s Daily published an article about a traditional Chinese herbal treatment—the Shuanghuanglian oral liquid—that could “inhibit” the CCP virus (novel coronavirus). The Chinese patent medicine was developed by two branches of CAS, the Shanghai Institute of Materia Medica (SIMM), and the Wuhan Institute of Virology. The news prompted a frenzied sale and led to a complete sell-out of Shuanghuanglian and related products in China. Even though the products’s effectiveness has been highly questioned and no clinical studies have been conducted, SIMM director Jiang Hualiang was commended as a role model in the country’s fight against the virus pandemic on Sept. 8.

At an earlier time in the history of the CCP, CAS made a number of contributions, such as “two bombs and one satellite” during the early nuclear and space projects. At that time, the CAS members were basically scientists who had returned from overseas before the CCP established its power in China.

However, once the CCP took power, it disregarded the principles of scientific research and implemented political control. It appeared that incompetent people without virtue or talents, but “obedient to the Party,” began to dominate the science and technology sector. For example, on Oct. 8, 2015, Tu Youyou won the Nobel Prize in Medicine and became the first mainland Chinese citizen to receive this award. She was nominated as a member of CAS several times but was never admitted because of her lack of a study-abroad background and having no doctorate degree. To this day, she still has not been elected as a member of CAS. One can’t help but wonder why the academic institution that’s meant to showcase the CCP’s greatest scientific and technological achievements has turned away the first mainland scientist to win the Nobel Prize in Medicine.

When CAS vowed to “focus on supercomputing systems and key material research” such as aircraft tires and bearing steel in the second phase of an effort known as the “Pioneering Initiative,” it revealed that the regime’s technological weakness is not just the chips sector.

So why did CAS make its pledge to the CCP at this time?

CAS President Bai Chunli gave the answer: “This year the central government is coming up with the 14th Five-Year [economic] plan, and we are also making a 14th Five-Year plan at the Academy of Sciences; for China to enter the forefront of being an innovative country in 2035, and to become a world power in science and technology by 2050. … This is also the general secretary’s entrustment to the state-run CAS.”

In Fact, CAS is clearly pledging its allegiance to the upcoming Fifth Plenary Session of the Central Committee in October. According to the agenda announced by the CCP in July, the Fifth Plenum will formulate the 14th Five-Year Plan and long-term goal for National Economic and Social Development and recommendations for the year 2035.

At the same time, the pledge also revealed the CCP’s ambition to dominate the world.

The CCP’s 2035 goal includes the controversial “China Standards 2035,” which was once regarded as an upgraded version of “Made in China 2025.” But China Standards 2035 aims to set a global standard for future technology, showing the CCP’s hegemonic ambitions in many fields of technology such as artificial intelligence, communication networks, and data circulation.

However, with the deterioration of U.S.-China relations, especially after the Hong Kong version of the National Security Act was enforced, the CCP’s repeated human rights violations have made the EU speak out against its intolerance, and the CCP’s militarization of the South China Sea has also aroused more vigilance in the international community and resulted in careful examination of other core technologies provided to the CCP.

Under this circumstance, the CCP is forced to stop its dependence on the West. However, judging from the historical experience of “self-reliance and independent development of science and technology” in the Mao Zedong era, mentioning “self-reliance” again at this time can only mean that China’s technology will lag further behind, and it will inevitably accelerate the destruction of the Party and the regime heading toward a dead end.