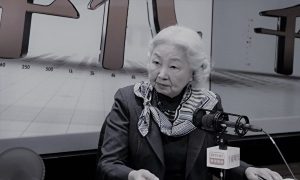 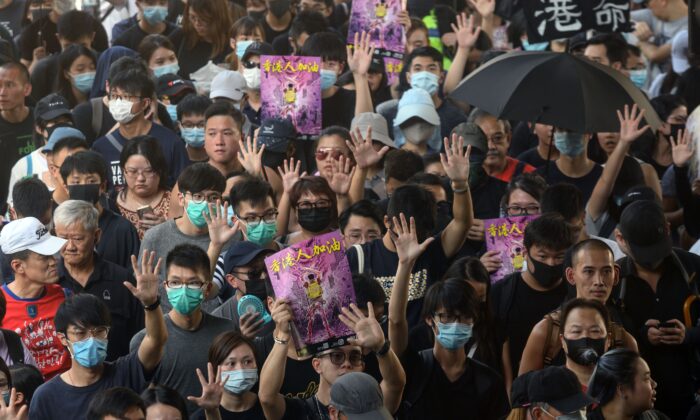 Demonstrators hold up their hands to symbolise the five demands that protesters are asking for, as they take part in a pro-democracy rally in Hong Kong's Tuen Mun district on Sept. 21, 2019. (Philip Fong/AFP/Getty Images)
Thinking About China

The ‘China Miracle’ Is Over

After almost six months of major disruptions in the China-ruled financial hub of Hong Kong, why hasn’t the Chinese regime crushed the ongoing protests? The People’s Liberation Army (PLA) is garrisoned in Hong Kong and the People’s Armed Police, a paramilitary force, has been positioned in nearby Shenzhen for weeks. Are their so-called “military drills” still in process?

How should one interpret the reticence of the Chinese Communist Party (CCP) to treat Hong Kong like Tiananmen Square?

Some view the imminence of the 70th anniversary of the founding of the People’s Republic of China (PRC) on Oct. 1 as a tempering factor. Perhaps it is. But there is more to China’s patience with the protesters than simply the anniversary of the PRC. And although violently dispatching the Hong Kong protesters would certainly be an embarrassment to the CCP, on the other hand, it would also be, in a tragic way, a fitting portrayal of what the CCP is all about.

US Fueling the ‘Foreign Influence’ Threat

What about the resurgence of U.S. naval operations in the South China Sea, the recent war games with South Korea and Japan, or its recurring presence in the Taiwan Strait? Is America’s higher profile in the region making China harbor second thoughts about quelling the Hong Kong protests?

That seems less likely, given China’s significant ability to field high numbers of troops, their advanced anti-warship weapons, and President Donald Trump’s disdain for getting the United States entangled in more foreign conflicts. America’s greater presence in the region and Trump’s warning on Hong Kong, does however, add fuel to the CCP’s decades-old domestic narrative of “foreign influences” being one of the gravest threats to Chinese sovereignty.

What about Trump’s threats to link the resolution of the trade war with how China treats the protesters? Is that threat giving the CCP pause? It’s certainly a possibility. Chinese leader Xi Jinping and the Party will soon realize, if they haven’t already, just how damaging the trade war will be going forward.

In fact, its impact is already being felt in many parts of the country. For the first time in thirty years, global manufacturing supply chains are moving away from China. Factories in the southeastern coastal regions are laying off workers and closing. The Chinese GDP growth rate has slowed to a 27-year low, and that will likely worsen.

This radical new development will have huge negative effects on China’s economy for the foreseeable future. With factories leaving for other countries, unemployment is rising in China. Not surprisingly, Chinese Premier Li Keqiang has made reducing unemployment his top economic priority.

Hong Kong Is at the Center of CCP Worries

Make no mistake about it, it’s not just the trade war that is causing the CCP pain. Hong Kong is at the center of the CCP’s deepest anxieties. There are several reasons for this.

For example, if Hong Kong is “militarily conquered” by the Chinese army, it will drive foreign financial business away to safer locales, just as the trade war is driving manufacturing away. In response, the United States and other Western nations would likely strip Hong Kong of its special economic status, and therefore, the financial hub of Asia would lose all of the advantages on which China so desperately relies.

In doing so, the CCP will have destroyed China’s financial gateway to the world, one whose stock market exceeds even London’s. It would also destroy tremendous amounts of wealth, as real estate prices would crash, while financial services and other highly lucrative businesses would abandon Hong Kong. The CCP must realize that although China’s brand may have survived the massacre at Tiananmen Square in 1989, that was before Western economies had been hollowed out by China. In the event of a massacre in Hong Kong today, China’s trade relations with the West would likely suffer much more than they already are.

The Myth of the Beijing Model Shattered

China’s big plan has been to convince the world that China and its Beijing Model is a better alternative to American global leadership. The Beijing Model of economic development was to be the blueprint for the 21st century. Western-style republican democracies would be outclassed by state-directed economies and one-party rule. That’s what Beijing has been selling the world for the past two decades.

In fact, the globalization of the Beijing Model is what’s behind China’s One Belt, One Road and Made In China 2025 initiatives. Never mind that the former is designed to steal natural resources from developing countries and the latter is intended to steal technology from developed nations. The CCP intends China to be the next—and singular—global hegemon.

But it won’t only be the CCP’s big initiatives, or even just Hongkongers and foreigners that will be impacted by the financial destruction of Hong Kong. Keep in mind that the CCP isn’t a party of self-made men and women; it’s the Party of billionaires.

These Communist Party billionaires have property and families that are living abroad in other parts of Asia, Australia, Europe, the United States, and Canada. It’s quite possible that many millions of dollars of Party members’ wealth are at stake in Hong Kong, as well as in Western financial institutions.

How much wealth will they be willing to give up to show loyalty for the Communist Party? How many Party members will be willing to go down with the CCP ship?

Every Party member knows that they owe much of their wealth to their position in the Communist Party and its ability to obtain financial assistance from the West. They also know that much of China’s wealth is a mirage. If that were not so, trillions of dollars would remain in China instead of flowing out of the country year after year, and the streets of Hong Kong would be red with the blood of protesters by now.

It’s the fear of losing wealth and all that comes with it that has kept the PLA in their barracks thus far. Xi isn’t the only one who realizes that the future of the CCP depends on what he decides to do—or not do—in Hong Kong. What’s more, the longer the protests go on, the more the Beijing Model’s myth of inevitability fades.

It’s a vexing dilemma for the CCP and everyone knows it. One of the Hong Kong protesters’ mottos puts the high cost facing Xi and the CCP in stark but accurate terms: “If we burn, you burn with us.”