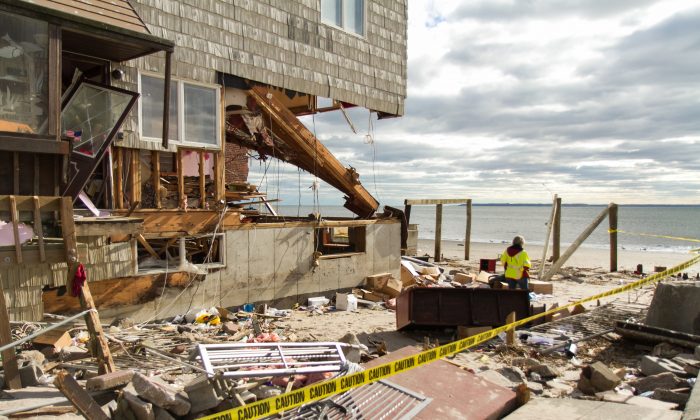 A women who works for a gas company, surveys the area of a house that was destroyed by Hurricane Sandy at Sea Gate Beach in Brooklyn on Jan. 8, 2013. (Kristen Meiwether/Epoch Times)
Opinion

The Chilling Effect of Global Warming

The news that for nearly half a decade, Florida Gov. Rick Scott has prohibited environmental officials from using the phrase “climate change” is absurd enough to belong in The Onion. Although the story of Florida’s governor makes for a good laugh, climate change is no joke here in New York.

For New York, the stakes are high when it comes to global warming. Years ago, many people thought of global warming as something that would happen “someday.” As it turns out, “someday” has come.

Since 2000, we’ve experienced 14 of the 15 warmest years on record—including 2014, the hottest year ever recorded. As the oceans warm, we’re learning that Antarctic glaciers are melting so fast they’re dumping a Mount Everest-size pile of ice into the sea every two years.

Nobody, of course, wants to leave the next generation a world where heat waves, floods, droughts, and worse are the “new normal.”

Scientists say we simply must stop putting carbon into our air, and repower our society with energy efficiency and clean, renewable energy such as solar and wind.

And that’s why President Barack Obama’s recent leadership on this issue arrives not a minute too soon.

As he described in his State of the Union address just over a month ago, the Clean Power Plan is the centerpiece of his strategy to solve the climate crisis.

For the first time ever, this plan limits carbon pollution from power plants, America’s 1 source of global warming pollution—even bigger than cars and trucks.

The Clean Power Plan would cut this type of pollution at least 44 percent in New York and 30 percent nationwide by the end of the next decade. By giving the states the opportunity to replace dirty coal plants with wind, solar, and energy efficiency, it also has the potential to speed the shift to clean power. And the plan is an essential building block to the success of the president’s climate deal with China—which is itself the cornerstone to a broader global agreement.

Polls show that two-thirds of all Americans back the idea—including a majority of Republicans and Democrats. Americans have submitted more than 8 million comments asking the EPA to take action on the issue, including more than 189,000 from here in New York.

Unfortunately, its not only decision leaders like Scott in Florida who are unwilling to acknowledge climate change. Some members of Congress—including backers of the fossil fuel industry and those who still deny the overwhelming science behind climate change—have vowed to do everything in their power to block the president’s plan.

Among the plan’s adversaries is Sen. James Inhofe, who once called global warming “the greatest hoax ever perpetrated on the American people.” As the new chair of the Senate’s key environment committee, Inhofe has pledged to use every lever of his power to block President Obama’s climate agenda.

What can and must we do to see that the Clean Power Plan is approved and put into place?

First and foremost, we must persuade more senators to be champions and stand with President Obama’s plan over Inhofe and his allies’ attempts to block it.

And here in New York, we need Gov. Cuomo to stand behind the Clean Power Plan, and maximize the potential it brings to unleash clean energy.

Most of all, we must continue to speak out and advocate for climate solutions, because we know when the public leads, our leaders will, someday, follow. That’s the someday we want to come.