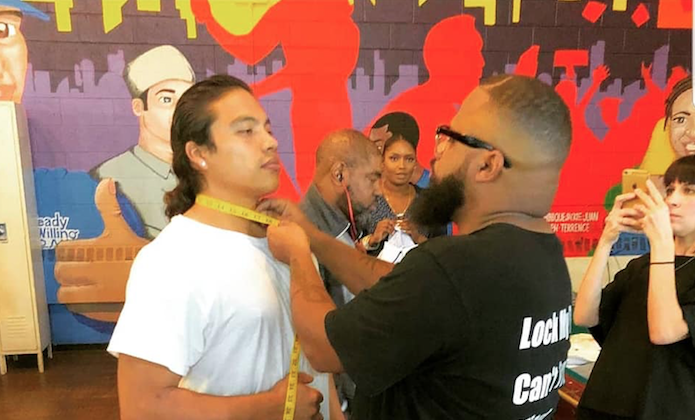 The Charity Helping the Underprivileged Put Their Best Foot Forward

100 Suits for 100 Men is changing its customers’ appearance outside, and in
By J.H. White
biggersmaller
Print

Kevin Livingston grew up there, and understands the root of the problem. The night before the first day of school, he reached out to his community members from the charity he started, 100 Suits for 100 Men.

Twelve hours later, 70 men were lined up in front of Emerson School shaking hands with, high-fiving, and encouraging the middle schoolers. A dozen police officers were also in line.

“I was surprised that I had so many cops come out, and I didn’t even reach out to them. I don’t know how they found out. It’s amazing; I’m just really humbled,” Livingston says. “When they respect your work, when you say you need help, they show up.”

In 2012, Livingston launched the non-profit 100 Suits for 100 Men, collecting suits—some from celebrities like Steve Harvey and Steve Martin—and giving them out to help men get jobs. Now the majority of the work they do is the follow-up and personal development work after the dress attire is given. Livingston and his charity are clothing its customers with love, confidence, and the inner fortitude to always put their best foot forward.

Livingston had the fortune of being raised by an “amazing” father and mother in South Jamaica.

“The area I grew up in was dicey, however, it was still full of people who were just doing the right thing,” he says.

His father taught him two core lessons that have shaped who he is today.

“Treat people like you want to be treated,” Livingston says. He admits at the beginning of his new business, through trials and errors, he’d fall short at times. But his father’s advice always echoed in his head, which Livingston now takes to heart in everything he does. “My father, he’s always one for treating people really nicely because you never know who you’re encouraging.”

Secondly, everyday, Livingston was required to show up to work in a suit at his father’s travel agency.

“I remember being in the back of his travel agency stamping brochures for him … but I had to come in with a shirt and a tie,” he says.

Livingston’s mom also helped shape him, though in an entirely different way.

“My mother is a community organizer by nature … [and] an education advocate … [She] was really big into the whole seasonal giving and giving back for young people,” Livingston says. For example, his mother would rent out daycare centers on Halloween and host parties, so that kids had somewhere to go.

Livingston himself got involved in community-building in his youth as well. He would host community poetry shows and do toy drives for kids at domestic violence shelters.

Though he was doing good for his community, Livingston also lost focus in high school and eventually dropped out. But he also understood the importance of financial autonomy—a core tenet of the charity he’d later establish.

“I didn’t really lean on my mom because I really want her, and my family, to know that I really want to build my own legacy and carry on my family’s legacy,” he says.

Livingston got his GED and went to work full-time, landing a job at a stock brokerage firm on Wall Street. He’d make 700 phone calls a day to qualify just 20 leads.

“I learned a lot from them in regards to persistence and drive,” he says. He also learned how to blend into the world’s most powerful financial district.

“They always taught us to act as if [we belonged],” he says. “I know what it feels like to go into a train or walk around Manhattan in a suit and look as though you fit in.”

Later on, Livingston worked at a bank in an area known for gangs. He saw young men who were confident, but society was pushing them away, not wanting to engage with them. He wondered how he could open a door of conversation and begin to change the narrative between these men and the community.

Livingston started collecting suits, and giving them out—a “pull-in” to be able to start a new conversation. That’s how 100 Suits for 100 Men began, which later became an official 501c3 charity.

“The suits are for interviews, and for morale and self-esteem boosters,” he says. When a new customer comes in, the first step is the charity’s boutique experience—a free suit, shirt, tie, shoes, and even a tailor to make sure everything is tip-top. He’s now expanded to also helping women, so men and women can both get an outfit, and a haircut as well.

“I believe that every customer that comes in our doors deserves an experience, not just receiving a suit,” he says.

Part of the boutique experience is simply listening to what the customer needs help with, and giving simple encouragement. “Hey, brother. You’re a good, man … Those simple words change the whole narrative, the whole ball game,” Livingston says.

85 percent of what the charity does is done after the customer gets suited up, such as seeing a job developer at the boutique. Then, daily follow ups to make sure he or she makes progress finding work and stays on track.

“We have many relationships in terms of employment that our customers see right after they come out of 100 Suits,” Livingston says.

100 Suits is also fully integrated into the local community. In addition to its two boutique stores, there are pop-up shops, and programming five days a week in Rikers Island, the city’s main jail complex, and at Horizon Juvenile Center, a maximum security facility in the Bronx.

Livingston says the feedback he gets from people who have gone through 100 Suits “means the world to [him.]” One gentleman recently posted on social media that he’d never go back to his life of crime.

The man replied back, “Kevin, it’s people like you that believed in me that helped me go forward.”

While Livingston has been deemed a hero by his supporters for founding this charity, he stays humble.

“The community is the owner … I’m here for the service to people,” he says. “You may find me on a corporate board, or in big time Manhattan, but where you’re guaranteed to find me is amongst the people.”