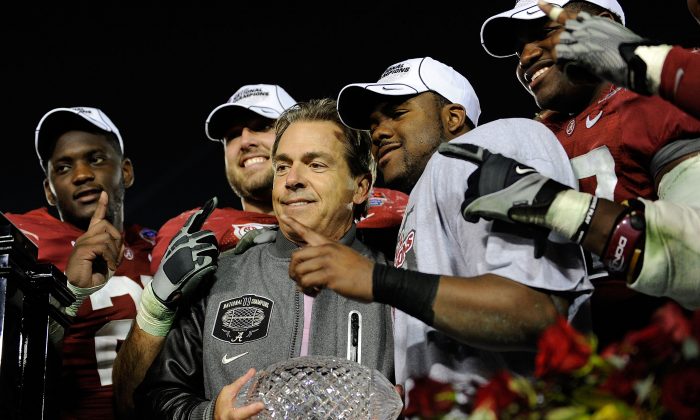 Nick Saban and the Alabama Crimson Tide won the 2009 title game over Texas, yet they likely would have had to defeat another undefeated team that year if there were a four-team playoff in place. The question is which one. (Kevork Djansezian/Getty Images)
College Sports

Okay we can say it: The CFP committee had an easy time this year.

Heading into Saturday, Dec. 5, there were only seven programs from the Power 5 conferences that had either one or no losses—and four of those teams (Clemson, North Carolina, Iowa, and Michigan State) were matched up against each other in virtual elimination conference championship games.

Meanwhile Alabama, then 11–1, took care of business in the SEC title game against a two-loss Florida team while 11–1 Big 12 Champion Oklahoma was idle. That left 11–1 Ohio State—which didn’t win its division in the Big Ten as the obvious one-loss outsider.

But this was in contrast to last year when the committee had to make the difficult decision to leave out 11–1 Big 12 co-champs Baylor and TCU in favor of 12–1 Ohio State (fresh off a beatdown of Wisconsin in the Big Ten title game), 12–1 SEC-winner Alabama, 12–1 Pac-12 winner Oregon, and 13–0 Florida State.

So that’s one out of two years where the committee had a somewhat obvious foursome of teams for the playoffs. What would have happened in the previous five years, though?

The first three are somewhat easy, but Big 12 Champion Baylor over Alabama is where the hangup is.

Here’s the Bears non-conference slate: bottom-feeders Wofford, Buffalo, and Louisiana-Monroe; meanwhile their loss was decisive—a 49–17 beatdown at the hands of Oklahoma State. Yikes. Meanwhile, Alabama had just one loss and it was the memorable last-second “kick-six” defeat to Auburn to end the regular season that ended up costing the Tide a spot in the SEC title game.

Résumés aside, though, the Big 12 would have thrown a fit if two SEC teams made it in over their one-loss champion.

Minor controversy here. The Cardinal finished with a worse record than 11–1 Oregon, but won the head-to-head battle by a field goal and went on to win the Pac-12 title—they’re probably in. The Ducks, though, have a decent argument over Big 12 winner Kansas State as the Wildcats were absolutely pummeled by Baylor 52–24 late in the season for their lone blemish.

Kansas State probably gets in over Oregon on a split decision, but it would be the wrong one: These two would meet in the Fiesta Bowl and the Ducks had no problems winning 35–17.

The main drama here is Oregon over Stanford despite the extra loss, but the Ducks easily won the head-to-head 53–30 and were Pac-12 champs—probably an easy call. Besides, Oregon’s losses were to some heavyweights—USC and top-ranked LSU. Boise State’s only slip-up was a narrow 36–35 defeat to TCU, but being from a smaller conference they’re probably not getting in unless they have an undefeated mark.

(FYI, the only Big Ten team with fewer than three losses was Michigan, but the Wolverines were unable to even win their division.)

This would be a nightmare.

You can probably cross off Stanford because they didn’t win the Pac-12—yet their only loss was to Oregon.

But taking them out is really the least of the committee’s problems.

The biggest headache is the three-way tie for first in the Big Ten and the unbeaten Horned Frogs. There’s only room for two of these four.

Trying to separate the Big Ten trio is tough. Michigan State beat Wisconsin 34–24 at home, but was embarrassed by an 8–5 Iowa team 37–6 in late October. Ohio State didn’t play Michigan State and lost to Wisconsin 31–18 (in Wisconsin).

TCU may have come from a smaller conference, but they ran the table and had wins over Baylor, Oregon State, and a 10-win Utah team. How can the committee leave out an undefeated team? At the same time, how can it pick the winner of the Mountain West Conference over one or more winners of the Big Ten?

(FYI, 11–2 Oklahoma won the Big 12, but two losses wouldn’t get them much consideration in this season.)

I’m guessing Wisconsin gets the call for the Big Ten, and the committee lets in TCU largely because of what happens in 2009.

This would wreck the modern playoff system. Five undefeated teams plus defending National Champion Florida—which had just a loss to the Crimson Tide in the SEC title game as the lone blemish on a annually tough SEC schedule—and we haven’t even gotten to the winners of the Big Ten, ACC, or Pac-10.

First let’s look at Florida. To include the Gators—who spent 13 weeks as No. 1 in the AP poll—would mean excluding two undefeated teams among Cincinnati, Boise State, and TCU, because we know Alabama and Texas are getting in no matter what. FYI, the Tim Tebow squad would go on to destroy Cincinnati 51–24 in the Sugar Bowl.

Even if the committee denied the Gators a spot, choosing two between Cincy, Boise State, and TCU is impossible.

The Bearcats—before the Sugar Bowl embarrassment—probably had the strongest résumé of the three as winners of the albeit-weakened Big East. Boise State had the best win of the bunch, beating Oregon in the season opener 19–8 in Chip Kelly’s first game as coach. TCU won a pair of ACC road games against Clemson and Virginia before throttling nearly every MWC opponent, except Air Force which they beat 20–17.

If I had to guess, I’d bet the committee goes with Florida and Big East winner Cincinnati while leaving small conference schools everywhere fuming over the omissions of Boise State and TCU.

(FYI, Ohio State, Georgia Tech, and Oregon won the Big Ten, ACC, and Pac-10 respectively, but finished with identical 10–2 records and would all be on the outside looking in this top-heavy season.)

So during the last five years, twice (2009 and 2010) the committee would have been put in impossible scenarios when choosing the best four teams. Another time (2013), they’d have a very tough choice picking between two SEC teams or the Big 12 winner, while the other two were relatively drama-free.

Odds are that the committee is going to run into an impossible situation and there’s going to be plenty of talk about re-forming the playoffs. The only way to calm down the debate is to give out automatic bids—one for each of the Power 5 conferences and throw in three at-large bids to round it out to eight teams. Of course there would be controversy over those at-large spots, but at least any team getting left out could only blame themselves for not meeting the automatic criteria.